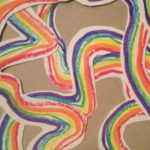 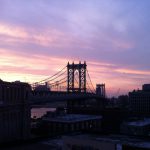 I took a long time to gather myself on entering; and I went silently through a ritual of bowing into the space. I felt emotional and took tiny steps, moving like water through the many floor-moving bodies that were distributed equally around the studio. I found a spot near the middle of the room and began to move in energetic circles, rolling over the back of my head again and again and letting the gestures cast me in arcs, pausing to tense in key stretches as I was quickly called to action.

Hannah, perhaps noting the quickening of the room, dialed the music back to tonal and encouraged us to take our time in arriving. To find the breath and our relationship to it. Most of us were on our feet by then, and the room seemed to move inside clear gel, slow and graceful, dipping collectively into the Stillness inside Flowing. Hannah coaxed us through a meditation of body parts, beginning with the feet. Interestingly, the only part of her narration I recall is about attention to the spine, which I reveled in, remembering that one partner of many years told me early in my 5Rhythms career that I flow with my spine, not just with my feet. Before long, I stepped into this very partner—someone I rarely meet in Flowing—but on this day it felt like the parts of our spines that sit behind and inside the rib cage were enacted, and palpable energy from that part of the body mingled as we moved. We were gentle, but retained a hint of the precise edges that I love about dancing with him.

I have often been amazed at this partner’s ability to meet me exactly where I am. For a long time, I assumed he could just go anywhere. For example, he seemed to be the only one who I could meet in the sharpest of Staccato fields. Over time, I have come to believe that it only looks like he can go anywhere, when in fact it is because he can see the room so clearly that he knows who is in the same energetic field, and then moves into the dances that call him directly.

With my eyes nearly closed and sunken low into my hips, I luxuriated in the coiling and whipping of my spine. A partner I shared a long dance with recently stepped right beside me. I felt him and opened my eyes, laughing, as the last time we met I felt I had stepped into a clearing and felt like I surprised him. This time, he playfully surprised me—a lovely kind of balance.

In the first wave, I hung back in Flowing Staccato and never fully expressed Staccato before the room was barreling into Chaos, loud with joyful vocalizations, including my own. I loved seeing Hannah move in unbridled Chaos, her long arms sailing up and down around her, her long neck in concert. Somehow early in my 5Rhythms career, I got the impression that raising the arms high up is a no-no, but in the last several years, I have been investigating more and more of the sky and the expansive space above. In fact, Hannah repeatedly invited us to dance with the space around us, even when we were told to take partners.

Indeed, there was an unusual amount of space in the room, owing in part to the fact that many people seemed to be drawn to gather in small, quietly moving groups. At moments, the room looked like a sea-bottom kelp-forest, waving collectively with the energetic currents.

Hannah taught the class in two waves, as is the usual custom in a two-hour class, but did not pause for verbal teaching in the middle of the class. Although the frame was two main waves, many tiny little waves expressed inside the larger structure; and Hannah repeatedly chanted, “The rhythms inside the rhythms.”

In Chaos, I spent long periods dancing with myself. I note that during Chaos I am least likely to partner. I wonder if I can extrapolate that I am very self-sufficient in Chaos, very comfortable and confident in Chaos—at least at this point. Often, for me, trances arise here; and I am inclined toward my own inner world. I am much more likely to meet a partner in any of the other four rhythms.

My dance was delightful throughout. My energy level was constant except when I was swept completely away by effusive expression, which gave rise to uncontainable bursts. I found joy in partnership, and was receptive (on this day) to everyone in the room. I found joy in my own inner experience. I found joy in brand new ways of moving, rolling out completely uncontrived. I found joy in stepping into moving with a brand new partner, and, too, stepping in with an intrepid long-time friend who is always willing to off-road from the basic map and from the many notations and traces we have recorded over the years on our uncharted, unchartable adventures.

Leading us from the Stillness of the first wave into the Flowing of the second, Hannah did something curious. Instead of guiding from the feet first as is nearly always the instruction with Flowing, she invited us to begin with the hands, working our way through the body and into embodied Flowing from there. I recalled Kierra’s aside the week before when she taught the Friday Night Waves class, that in many cultures the hands are considered to be the “messengers of the heart;” and I wondered if the hands might be particularly important in Hannah’s personal practice. As I remarked about the class the week before with Anne Marie, taking class with a teacher I have never encountered before can be very valuable—perhaps just as my grandmother, Muriel Grigely, used to feel about stepping into a different church for the first time.

Hannah invited us to partner; and I found a good friend. Both of us were faster than the music; and we giggled and super-sped up, then slowed down and leaned in toward each other: slowing, moving around. Instructed to turn the partnership into a foursome, two others joined us, though the group remained very porous, with several people from other groups or dancing individually moving partially in the field we created. Without instruction, the group dissolved and my partner and I returned to each other briefly before moving on to other parts of the room.

I noticed a friend I recently shared a sublime dance with standing a bit off to the side. I considered trying to engage him, but thought better of it, wondering if it might not be best to let him have whatever experience he was having. I also felt hesitant because our most recent dance was so beautiful—sometimes I feel shy after sharing an experience like that. I noticed that another dancer did succeed in drawing him out and that he seemed to move cheerfully and fluidly, as their group at moments intersected with ours at the point when we were told to dance in groups of four.

During both waves, in the bridges from Lyrical into Stillness, repetitions bubbled up. In the second wave I found a gestural expression of the disbelief that precedes grief, my hands sobbing, crying, “No, no, no, no, no!” I didn’t connect it to a specific experience. It didn’t make me cry, but I could feel its resonance. In Lyrical, I experimented with an awkward groundedness, then took off and sailed throughout the room with luxurious, expansive gestures, pouring my smiling eyes into whoever’s eyes I could manage to meet, high on the toes and raised into the front chest.

As the final wave of the class began to draw itself to a close, I stepped into a partner’s field who I recently shared a long dance with, slightly hesitant. He smiled, inviting, and we resumed a previous class’s investigation of tiny, crossed over steps, flashed foot soles, elbows held close to the torso, occasionally moving in a way that was as closely contained as could possibly be without touching. I moved in and out of more stretched and extended gestures and big, back-crossing steps, but drew back closely into this minute and quirky investigation again and again, delighted.

We came seamlessly into unselfconscious contact, each planting the outside of one foot to touch, side by side. He leaned into me and I returned the gesture, at once pushing and yielding, then stepped around his planted foot, curving us into an arc. The room fell away, the sound of breath grew stronger. We moved in a little matrix, opening at moments into a kind of ballroom glide. At other moments we balanced, finding small swinging movements inside the balances. I noted that he is closer to my small scale than many men, and found balancing exceptionally dynamic and available, feeling like the animations you see of shifting crystalline forms, alive and clear, seeing and seen.

The process of leaving was overlayed with a conversation with a friend. As we took the elevator from the 5th floor down and stepped onto 6th Avenue, he expressed that sometimes he feels like he has to really make a commitment to be in “his” dance. Otherwise, he would just be partnered all the time, doing someone else’s dance—a sentiment I have heard expressed hundreds of times. He was already hugging me goodbye; and we didn’t have time, but this is what I wanted to say:

“This might be unique to me, but at this moment I don’t feel that I have a “my” dance. And I don’t think there is a lack in that. Just as there is no “me” that is separate and self-existing, there is no “my” dance. My deepest, most emotional, or most idiosyncratic personal expression is not separate from any of the dances I have shared with partners or in community. For me, dancing alone and dancing with others are not opposites, but are shades of difference—all part of the beautiful display comprising the myriad forms of this tiny, precious life.”

This blog consists of my own subjective experiences on the 5Rhythms®dancing path, and is not sanctioned by any 5Rhythms® organization or teacher.

(Images: The tangled rainbows is an image from my own studio.  The beautiful sunset photo of the Brooklyn Bridge was taken and shared with me by 5Rhythms teacher Hannah Loewenthal .)