No Time to Lose 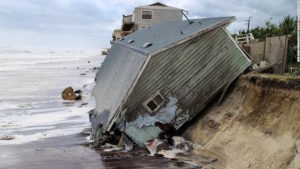 The themes Tammy addressed during this week’s Friday Night Waves class aligned with what I had been experiencing in my own life that day.  Yet another hurricane had ravaged the Caribbean a short time before, causing vast destruction, including flattening nearly the entire country of Puerto Rico into piles of sticks and broken concrete.  Robert Glasser, The UN Special Representative for Disaster Risk Reduction, commented, “There can be little doubt that 2017 is turning into a year of historic significance in the struggle against climate change and all the other risks that put human life in danger and threaten the peace and security of exposed and vulnerable communities … who find themselves in harm’s way from hurricanes, floods, and earthquakes.” (Vox.com, September 22, 2017) The violent white nationalist movement appears to be gaining strength.  The president has escalated his nuclear saber rattling toward North Korea.  And the same president attempts to abuse football players who want to express their disenchantment with the current state of America into silence.

Working on a book at a café, I am swept with tides of weepiness.  Having trouble getting my mind off of the 70,000 people (including a friend’s family) in Isabela, Puerto Rico, who live in the shadow of a giant dam that is on the verge of bursting after such an incredible amount of rain with Hurricane Maria.  As I said in the last post, I no longer find the Christian idea of apocalypse so far-fetched.

In the morning, I go to a walk-in medical clinic, certain that I have an ear infection.  For the two nights previous, I woke up in the early morning and couldn’t fall back to sleep because of the pain.  In fact, I am so sure I have an ear infection that I take an amoxicillin pill that I have on hand, a medication often prescribed for ear infections.  To my surprise, the doctor says she sees no sign of infection whatsoever.  Not even slight redness.  “Do you grind your teeth at night?” she asks.  I nod, thinking, who in America isn’t grinding their teeth lately?

Despite my serious concerns about the world and my place in it, I have been experiencing joy lately, too.  At the moment, I’m teaching mindfulness (almost synonymous to meditation for these purposes) to eight different classes at the high school where I teach. It has been a dream for me to bring this work to students, and it could not be more timely.  Also, my no-longer-small son, Simon, is happy and thriving after the first two weeks of second grade.  On top of that, the weather has been spectacular. To make me even happier, Tammy, who teaches all over the world and often has to rely on substitute teachers for the Friday Night Waves class, is leading the class, and I manage to arrive on time.

In the rhythm of Flowing, Tammy plays a heartbreaking song with a West African vocalist, whose tender voice soars.  I often start on floor off to one side, but today I’m on my feet, moving through the room, looking for all the movement that is available in my spine, feeling the people around me, pausing in pockets to stretch and move on the floor, but feeling integrated with the room at once.

In Staccato, Tammy plays a song with a lyric that is something like, there is no warning for the revolution.  I am fierce, gigantic, taking huge sideways steps, clenching my fists, crying out gutterally, and sinking low into the hips.  I think about revolution, in detail.  I join with a friend and we explore the following song, which is full of resistance and grit.  I find flexion in my pelvis, front and back, even when I sink low with my hips nearly on my heels, scooping the air, drawing power in, sending it out.

The rhythm of Chaos lasts and lasts.  I am wild, both with partners and on my own.  Chaos, the rhythm of release, is a fusion of the rhythms of Staccato and of Flowing, but today my Chaos very much tends toward Staccato – the rhythm of action, of stepping up and taking one’s place in the world.  I keep taking breaks to totally soften myself, then return to engaging resistance, finding odd and unexpected forms, including picking up my heels sideways, reaching with force to the farthest edges of my range, and exploring balance, sometimes passing its edge.

Lately, I have noticed a pressing outward, sideways at the back of my neck.  It is planar, linear, like a giant grain of rice. I have been able to soften this area, feeling my head and neck grow upward as a result. I sometimes have a sore neck after yoga or dance practice, but today my neck seems more released than usual, even with such a Staccato edge in Chaos.

As the wave concludes and we move through Lyrical and Stillness, it hits me that I probably won’t be taking Simon to meet (his paternal) family in Puerto Rico this summer, as I have planned, and further, that the coastal town most of them live in, for most intents and purposes, probably no longer exists.  So far, we have not had any contact with them, and have no idea how they have fared.  My face tightens in grief.  I move inward.

“We have all the time in the world, and yet, we have no time to lose,” Tammy says during a period of verbal teaching between the first and second waves of the class.  I cry while she talks, hot tears, jumping forward and out. Tammy talks about the many disasters of the preceding week, offering, that some people here have relatives they can’t even reach at the moment.  I realize I am in that category, though grief seems even bigger than one event.  Tammy also evokes the creator of the practice, Gabrielle Roth, expressing gratitude for the map she has established for us, and recalls that Gabrielle herself believed we had entered into a period of collective Chaos. She says something that reaches me as: even when it feels like the world is falling apart, at least we have this practice.

Moving into the class’s second wave, I am withdrawn.  I open my attention to the people around me and try to bring mindfulness to the feeling of my feet on the floor.  Even so, I have lost the caterwauling ebullience of the first wave and sort of creep along.  Internally, I think, “Please let me find a partner so I can get out of this constrained little story in my head.”  Sure enough, before long, Tammy invites us to partner, and nearly everyone in the room quickly pairs up.  I’m snapped back in, engaged, and I beam, joining forces with successive partners, though Chaos, too, finds me more subdued in this second wave.

In Lyrical I join with a favorite partner, sharing a dance of seedlings, of offering, whispering, twittering, of casting forward, down, up, around, leaping through every available level, brushing my hands on the floor and then skyward again, experiencing the full extension of my arms, then undulating forward from the sternum, breath filling my hands and pouring out of them onto the floor, into the room.

I drift away from my friend as the room transitions into Stillness, and move closer to Tammy.  My movements become subtle, and I turn my attention to finding every possible articulation of my coccyx, thinking again about the idea of apocalypse, wondering how much my practice will be tested in the coming months, wondering how much I have to give, wondering how bad things can get and if they will ever get better.  I also wonder if I can find a way to wake up no matter what, and if I can lead the way for my son, no matter what comes, even if the dam breaks.

“Strive at first to meditate upon the sameness of yourself and others. In joy and sorrow all are equal.” –Pema Chödrön, No Time to Lose: A Timely Guide to the Way of the Bodhisattva