Reclaiming the Earth: An Urban Confession 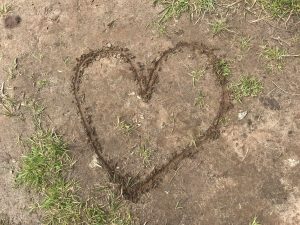 I’m making a garden. Today, a local man came with a rototiller and churned the ground up, breaking through a thick layer of grass.

And yesterday I spent the afternoon planting flower seeds.

I haven’t experienced spring outside of a city since I left home for college in the 1990’s; and it has been fascinating. Cold is very slowly transitioning to hot. The trees are unfurling. Active, small creatures like squirrels, chipmunks, and birds romp at the edges of my perception. The field behind my parents’ house–where my ten-year-old son, Simon, and I are hoping to wait out the pandemic–is nearly solid yellow with dandelions. They would normally have been trampled by the high school athletes who use this field to practice, but this year they are abundant. Nearby, the grass and plants at the contours of one of the river’s gurgling feeder streams are emerald green now, translucent with sun energy.

Following my work day, I thought I would do a friend’s zoom class. After playing on the swing in the backyard with Simon I was running late, but decided to set up the speakers and computer outside and join anyway. As it turns out, I got the days mixed up. I knew I didn’t have time to pivot because of a work commitment later in the afternoon, so I decided to go with my setup and dance to a playlist I already had prepared.

Earlier, talking with a friend, I had recalled the gardens of my childhood. At Simon’s age, I had a big garden. My grandfather would help me till the soil and plant in late May, then I tended it myself. The first year or two, I had to haul water in my little wagon some distance every day to water my plants.

I spent hours there. I remember placing a pepper or other vegetable upright in the sun and sitting and staring at it for long periods, what I would now call a form of meditation, though I didn’t have (or need) language for it at the time. I remember eating the butter-and-sugar corn I grew slathered with butter at backyard summer dinners. I remember the dark dirt, the weeds, the sweat, the chicken wire fence, the dangling green beans, the prickly thistles, the crawling around on the damp, uneven soil between the rows.

Knowing my own son at this age, I marvel at my childhood ability to take on this big project and accomplish it without reminders, rewards, or adult interventions of any kind. I’ve been trying to help Simon learn to be a creative self-starter, but have faced challenges in getting him to buy in, perhaps not unusual for his generation. As a child, I had vast stretches of unstructured time, something that led me to learn and create without pressure and often without audience.

I became an urban person in my late teens, immersing myself in a totally-indoor underground dance world, and lost my affiliation with the earth.

My brother lived for many years in Colorado. Before then, I always said I was an “ocean person,” like some people say they are a “dog person” or a “cat person.” But when I went to visit him in Colorado and explored the raw, jagged Rocky Mountains, I decided I was a mountain person, too. I realized it was limiting to make myself be one or the other.

But the truth is that I didn’t have to kick out one affiliation to insist on being another. They can both live in me. And now I’m remembering a nearly-lost self who had a numinous connection to natural phenomena, who followed the cycles of the moon, who read the tarot, who perceived everything as alive, and who studied nature-based religions with keen interest. 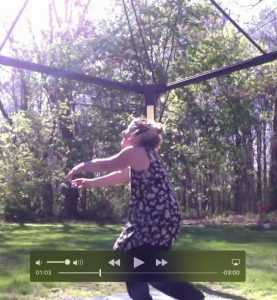 Back to the speakers and computer in the backyard, I decided to dance a wave. In 5Rhythms, that’s when we dance through each of the five rhythms in sequence:  Flowing, Staccato, Chaos, Lyrical, and Stillness. I was tired, and I didn’t really think I would get into it. In fact, I weighed the possibility of doing yoga or going for a run as soon as I pushed through this short wave.

The speaker volume was way up and I started to move in circles and pay attention to my feet in the rhythm of Flowing.

Of the five rhythms, Flowing seems most foreign to my nature. In Flowing, we connect with the earth. We drop our weight and our attention down. There is a real humility to it. And to be honest, I have sometimes found it boring, and have been eager to rush into the fiery expression of Staccato and the explosiveness of Chaos. It’s almost like in sticking with Flowing, I’m just doing my due diligence.

It’s possible this disinterest in Flowing relates to the fact that for so long I disowned my earth-self in favor of a more desirable identity. It took years of bringing my attention to the feet again and again to even begin to find my relationship to Flowing. It took many more years to fall in love with it.

Today, I felt the soft earth under me as I moved, and let it be simple, let it hold me, let it call me.

My Dad appeared on the back steps and asked if I had any ideas for dinner. I gave my input, then returned my attention to the feet, finding increasing engagement.

In Staccato the music spoke to me; and I couldn’t help but be inspired to sink low, to travel, to explore my elbows, to exhale forcefully. A song I absolutely love played and I leapt and bounded, removing my shoes and bouncing directly on the soft grass. And another song I love. And another. This one was a coiling, fast-tempo jazz song in the transition from Staccato into Chaos.

By Chaos, I was untethered, spinning and bouncing back and forth; in a rushing, weighted, articulated spin with sailing head, low and pumping, light and loose. One knee has been sore with so much practice, but dancing on the grass protected it, and I went all out, traversing a wide radius.

In Lyrical I was ebullient, cascading to the ground and into the air, beaming, coursing an arm up and then another, crossing over, rising a kicking leg to the side, falling into a dramatic squat and rapidly uncurling in an upward whirlwind. I added one more Lyrical song since I was nowhere near done with this exploration. I rocked my elbows in a plane around me and let them pull me up into my side angles, nearly kicking up my heels.

It wasn’t until many years of dedicated work with Flowing and with the ground that Lyrical started to reveal itself to me, and since then it’s become a place I love to visit.

In Stillness I was still rushing, alive with light-sugar. The lowering sun peeked through the emerging tree leaves. When the song faded, I continued to move with everything, feeling the humming molecules of the ground, the trees, the small animals, and even of the plastic and metal around me.

I love taking my friend’s class, but I also love dancing alone, and it kind of seemed like a blessing that I’d mixed the days up. I love what individual practice teaches me. I love that it is self-generating, and that I don’t need anything but what’s inside of my own heart. And connecting with the land gives me endless things to dance to–a rich symphony of form, space, and energy.

I startled, remembering I had a work commitment at five, and ran to check the time.

I had another half hour, so I decided to practice yoga in the sunshine. Standing alert, with my feet flat on the warm patio, hands aloft, I spotted a bird of prey, almost invisible it was so high up–seeming to hover in the air, barely moving. Moving through several poses, each time I found myself on my feet and looked up, the far-off bird was still hovering in that one spot. Then, the next time I folded my head down, moved through a sequence, and rose back up, it had disappeared, leaving nothing but endless blue sky.

Simon and I raked the grass clumps out of the newly-tilled plot that will be our garden, hauled them to the edge of the lawn, and dumped them into a raucous pile. 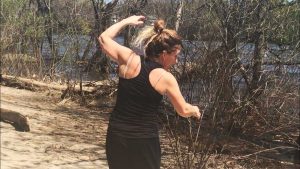 Later, I ran in the woods on a path along the Scantic River. White and grey clouds began to roil and it started to rain. I danced with the river’s currents, seeing into the depth and contours of the river because of the lack of sun glare. I saw the land’s contours above the water line, too, and perceived the continuations of the rivers and streams with all other flowing water.