“I think I have to get out,” I said as my Dad, my ten-year-old son, Simon, and I sat in a stuck canoe on the Scantic River.

I climbed onto the slippery, protruding section of the log that was blocking us and tried pushing. The canoe remained stuck. I instructed Simon to get out too, then balanced my way to a spot on the limb that had an extra branch where we could hold on to balance and exchange places. My Dad shifted from the back of the canoe to the front and leaned heavily backward, trying to lever the canoe over the tree trunk that was blocking our passage while I pushed and tugged. Eventually, it shifted. I squatted low, and held my hand out to Simon so he could creep down the log back to the canoe, then let go of his hand and climbed in myself.

The river was extremely low for canoeing. Normally, my Dad shared, the river is cleared by local parks officials every spring, but it seems like they took this year off as our path was riddled with downed trees.

For the past few days, I’ve been anxious. My work is teaching; and most years by the beginning of July, I’m finally starting to unwind and relax. This year, I’m having the opposite experience. I kept telling myself if I could just get Simon and I through the school year, summer would be waiting for us like the promised land. I also thought that if we could all just isolate for three months, we would move through the worst of the pandemic, and then we could return to life safely.

But it’s been over three months, and the pandemic is still raging. Even in places that have “flattened the curve,” as in New York City where Simon and I live, there are still significant new cases daily. And though there is no end in sight and many states have precipitous increases in cases, the president insists that we need to get back to driving the economy so he can get re-elected in November.

In addition, like many, I feel called to action as the movement for racial justice sweeps across the nation, and at once feel the need for deep listening and introspection. The need to lean into this work while there is a window of opportunity creates a sense of urgency, at the same time the need for inner work creates a need for patience. This alone would make for a challenging – though absolutely essential – period, never mind dealing with the ongoing pandemic.

The obstacles to dismantling centuries of racism and oppression feel overwhelming at times. It’s hard to even know how best to define the obstacles, or rather, the complex, overlapping processes that sustain 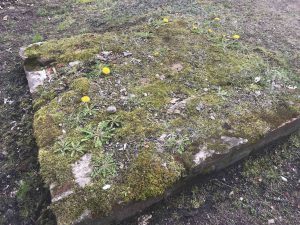 On the river, for this one day, it was a relief to encounter tangible obstacles we could move through and leave behind us.

Since March when the pandemic started, I’ve practiced the 5Rhythms – a movement meditation practice created by Gabrielle Roth – nearly every day, occasionally in zoom classes, but most often on my own. Most of my dances have been characterized by strong engagement, but in the last few days, movement has been uninspired. I’ve been practicing for long enough to know what to do when practice goes flat: continue to practice regularly, accept whatever arises, and remind myself that the magic always comes back eventually.

Most days, I dance in the backyard, where I can freak out without stressing my knees and joints. Yesterday, the sun was beating down, so I wore a baseball cap and moved in and out of the shade, from the patio where the speakers and computer were set up, to the farthest part of the yard, which is well-shaded by trees. The oppressive heat and humidity might have been a factor, but I kept losing heart. I didn’t want to play any of my favorite songs – the ones that always cause me to explode in dance – since I wasn’t sure I could lift off and was afraid to ruin the songs’ power to move me in the future.

I moved diligently through the entire wave regardless. When I felt a twinge in my lower back, I leaned forward to stretch out my hamstrings. When the wave – that’s when you move in sequence through each of the 5Rhythms of Flowing, Staccato, Chaos, Lyrical, and Stillness – concluded, I spent some time stretching in silence, feeling less flexible than usual and noting many aches and strains.

“Dad, when is the landing coming?”

“Oh, I think we must have passed it,” my Dad said as we navigated yet another seemingly impassable obstacle in the river.

Simon and I have been with my parents in northern Connecticut since March when the pandemic started in our region, and finding ways to keep him productively engaged has been a challenge. Our plan was just to see if we could get the canoe to the river, and paddle a short distance as a test run. The canoe had not been used much in the last several years, but it seemed like something we could do to entertain ourselves during the summer doldrums.

Unfortunately, we missed this first landing and had no choice but to take on a much bigger adventure than we’d signed on for.

I pulled out the phone out of its ziploc bag, opened the GPS, and squinted, trying to make out our location.

“I think we just have a few squiggles in the river, and then we should come to a road. But do you think we should turn back?”

Simon loudly insisted, “Turn back! I vote we turn back!”

My Dad assured us that it would be much harder to paddle back upriver than to continue until the next landing, so after a brief period of discussion we decided to continue in the same direction.

A dragonfly with a shimmery turquoise body and black wings twittered into the boat. Simon screamed and jumped reflexively from his seat on a wooden crossbar in the middle of the canoe, stepping his weight to the side of the boat and nearly tipping us over. “You can’t freak out now! It puts us all in danger! You are going to have to keep it together,” I said sternly. Simon shifted back into his seat and tried his best to work with this mandate.

We continued to paddle and work around fallen trees, rocks, and shallows, with Simon and I paddling in sync, and my Dad steering in the back and calling out instructions. 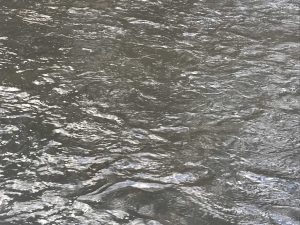 In addition to dancing every day, most days I run down a big hill from my parents’ house, and around a trail loop in the woods, sometimes several times.

Then I find a place to dance. Yesterday, I chose a spot on the sandy path near a gurgling section of river. The speed of the current here as it churned over a section of rocks heartened me, as many other sections have slowed and stymied with the summer heat and low water level.

I drew a circle in the sand to dance inside of, then imagined that I invited the guardians of the four directions, along with my ancestors, deities, teachers, guides, and spirit animals. I moved in the rhythm of Flowing – the rhythm of receptivity, listening, and grounding – at great length, taking in my own ill ease and unrest. I wasn’t sure I would ever break through to Staccato – the rhythm of action and directed intention, but eventually it did appear, if briefly. I noted a mild headache as I released into the rhythm of Chaos, bouncing gently back and forth. Lyrical today was a mere formality. The final rhythm of Stillness moved me to notice the woods, trees, and thriving green life, though still I remained subdued.

Over a decade of 5Rhythms practice, particularly practice in the rhythm of Chaos, has helped prepare me to deal with uncertainty, but lately it has been uncomfortable. I know that if I can just relax into it the deadening anxiety will release, and I’ll be left with just raw fear and grief, but there are still so many decisions to make, so many factors to weigh, so much information to evaluate.

Part of me thinks something is wrong, and wants to make these feelings go away. A wiser part of me understands that however I feel is fine, and will eventually shift anyway.

Since my mom was planning to pick us up wherever we ended our adventure I tried to reach her, but couldn’t get a signal.

I kept checking the GPS to see if we were parallel to the road yet, but it seemed to be zooming out. I turned off the phone to conserve battery, as we were at just 12%, and stashed it in the front of my shirt.

There were no houses, picnic tables, other boaters, or signs of life beyond green wilderness. The river was so low that the sides seemed like cliffs, with normally-concealed, gnarled tree roots framing our course.

“I like this part,” Simon said as we drifted through a clear section with fewer bugs.

I checked the GPS again, and made the alarming discovery that we were moving in the opposite direction from what I thought. I had a moment of panic, especially concerned for my 70-year-old father who has a heart condition and diabetes if we were stuck out in the sun for a prolonged period, though he appeared to be holding up just fine. I tried to reach my mom again, but the call still wasn’t connecting. When the next big insect appeared, Simon broke down crying.

We continued to paddle. “On the left everyone! Let’s try to clear this log!” my Dad shouted as the canoe thudded to a stop once again. This time, I got out, my feet splooching up past my ankles in slimy mud as I pushed the canoe back into movement.

We celebrated as we maneuvered around another tree, this time continuing through a tight spot without getting stuck.

I tried to reach my mom again, but the phone wasn’t even ringing. I tucked the phone away to avoid crashing into the sharp overhanging branches of another felled tree as the canoe sailed under it with the current, then tried one more time.

“Meghan, we should wait until we get somewhere so she doesn’t have to hang around,” my Dad argued reasonably.

“But we’re almost out of battery, and someone needs to know where we are!” I countered.

I was finally able to reach my Mom, just before the battery died. And though I was beginning to fear we might have missed another landing, we spotted a bridge with my mom in the middle of it, waving and taking a video.

“We’re still alive!” Simon cried out happily as we rounded this final bend, waving his arms to get my Mom’s attention.

The long list of uncertainties and fears is still there, and continues to dampen my joy in daily practice, but I know that if I keep opening and opening to the uncertainty that is inevitable anyway, I can move through the obstacles that block the river, and move into the future, knowing full well that this uncertainty is just a hyperbole of the uncertainty that is always there in our experiences, lurking at every bend in the river.