Insurrection, Terrorism & Preparing for the Work Ahead 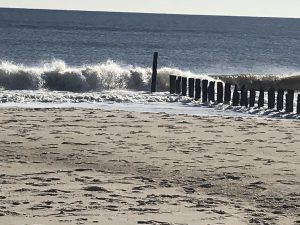 I seriously bundled up with a heavy coat, sweater, wool socks, ski gloves, and hat since the last time I danced at the beach it was frigid. But to my surprise it was relatively mild. I was able to dance in just a sweater, and before long I also took off my gloves.

The week has been another rollercoaster. During the work day, I usually ignore news, so on Wednesday it wasn’t until 4pm when I turned on the radio that I learned that a mob of white nationalist Trump supporters who refused to accept the results of the US democratic election had invaded and looted the US Capitol building, in an act of terrorism and insurrection.

It was only later that I learned that Democrats Raphael Warnock and Jon Ossoff both won runoff races for Georgia’s two Senate seats, shifting the balance of power in the Senate to the democratic party. But this was even bigger.

Before the election the two Republican Georgia Senate incumbents joined forces, one of them saying, “We are the firewall. Not just for the Senate, but the future of our country.” No one misunderstood what they were trying to say. 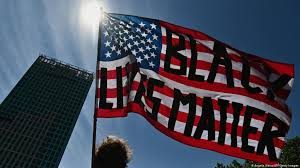 Georgia, like most of the US, has a history of suppressing the votes of Black people to shore up white supremacist power, through a host of mechanisms. Leaders like Stacy Abrams and legions of activists went all out to analyze and combat voter suppression tactics. These tactics include the propagation of false narratives that certain people’s votes don’t matter. But Black voters turned out in droves, proudly cast their votes, and had a massive impact on national politics, in the process dealing a blow to white nationalism.

Like many, I expected that Trump supporters, stoked by his racist rhetoric and ongoing lies, would resort to violent action. There is a debate about whether he has amplified white nationalism or if he has just brought it out of the shadows, but for his supporters to actually take over the US Capitol, for the National Guard to be so slowly dispatched, for lawmakers to be huddling in fear, and to watch gleeful terrorists ransacking desks and cavorting through the halls of the US Capitol, at least one brandishing a confederate flag, and the lynching platform they erected outside, was horrifying. And perhaps the most bitter pill of all, the knowledge that they got into the Capitol, when people looking a different way than white would never have made it up the steps, and would likely have been shot on sight if they had entered and tried to ransack the Capitol.

I listened to the ongoing coverage, dismayed, and at once furious that Americans who are happy about the historic outcome of the Georgia Senate races – like me and like the people who worked tirelessly on the campaigns and who dared to hope that their vote mattered, and then found out that it really did – didn’t even get one day to celebrate.

I had been dancing all week, but was eager to bring this matter to the sea. 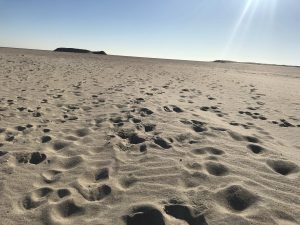 The tide was rising but there was still a wide section of packed sand to move on. I settled in, also removing my shoes and dancing in my knee-high, polka dotted wool socks.

There were barely clouds and the sky was endlessly blue.

I turned my attention to the waves, feeling especially the pull-back of ended waves, and the pull of gravity as it drew my body down the sandy inclines and into circles and loops. I thought about a book I’m working on and different phrases and ideas drifted by, occasionally catching hold for a brief time, then dissolving again with the ending waves.

I really settled in, wishing I was totally alone but avoiding eye contact with passing beach strollers, at least during this period of settling the body.

One thing I love about dancing with the sea is that there is no external soundtrack telling me what to do with my body, no external prompting. It is just me, and I can be as patient or as manic as I need to be. On this day, I felt like I could stay in Flowing for a very long time, sometimes attending to gravity, feet, and circling; and sometimes shifting attention to the ocean to inspire my weighted gestures, breathing its power in, letting its lowing depths sigh right through me.

Staccato sparked when it was ready, reminding me to move my truth, to speak my truth. I thought the book I’m writing was going to be about teaching mindfulness to teens. In the chapter map, there was one chapter dedicated to racial justice and reparations, and I knew racial justice would make its way into other chapters, too. But when I sat down and started to write, the book tore itself out of me. I wrote seven chapters in seven days between Christmas and New Year’s Day. And as it turns out, much of the book is about racial justice and injustice, white supremacy, and oppression, and what I hope are ways to combat these complex, interconnected systems, on the granular, implementation level of an individual classroom.

I’ve been on fire and in agony, contending at once with my own complicity, my own white privilege, and contemplating my small trajectories of activism and how to amplify them.

Staccato came and went, shifting before long into Chaos. I took off my hat and placed it uphill with my coat and sneakers so it wouldn’t fall off and go tumbling into the icy sea. I let my head flail around, getting an eyeful of sun, then seeing red afterimages everywhere I tossed my spinning gaze.

The only Lyrical that seemed likely to emerge was in tiny pockets inside Chaos. I could already feel Stillness pulling me and accepted its invitation.

Just when I’d accepted that Lyrical might not fully emerge, I shifted fully into it, opening up my radius, rising onto my toes, rolling my arms high and out, beaming with my face toward the blue sky. I stayed in Lyrical and in Lyrical Stillness for a long time, whisper dancing, and at last coming to a grounded stop, feeling the vast horizon, the endless curve of the sky, and the mysteries of the ocean’s depths.

Gazing outward, preparing for the work ahead.

“History will rightly remember today’s violence at the Capitol, incited by a sitting president who has continued to baselessly lie about the outcome of a lawful election, as a moment of great dishonor and shame for our nation.” – President Barack Obama