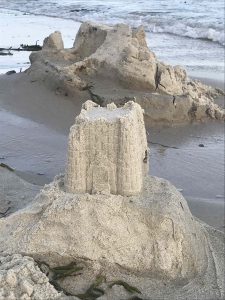 After several beautiful beach days in a row, this one was stormy. I spent last week at Cape Cod with family, a tradition that has continued since my mother was 13, in 1963. This year had an excellent turnout with 20 family members scattered through various cottages, including my 11-year old son, Simon, and three other kids. Maybe the drain from this long year of isolation and uncertainty made us crave time with family more than usual, though I found that I still needed a lot of time alone.

Each morning I packed a small bag with drinking water, a towel, goggles, and swim cap, then hiked around jetties and down several beaches to the two-mile-long West Dennis beach. Then I would put my bag under a lifeguard chair and walk until it felt far enough and swim back to where I started. On the way I might be rocked by choppy waves, find beachgoers’ lost treasures, or observe golden sand ripples and busy crabs under calm water.

A storm at sea made the water so turbulent and green-grey opaque that I was afraid sharks would be near the shore. I put on my bathing suit and packed my bag anyway, this time putting loose legged pajamas back on over my suit and tying my towel and bag inside a plastic shopping bag so they wouldn’t get soaked.

I planned to dance a 5Rhythms wave on the sand, then decide later if I would still swim along the shore. The tide was nearly high and there was not much packed sand to move on, but I started to circle in Flowing, giving full attention to my feet as they churned half moons and indentations in the sand. The rain faded from the center of my attention and I got wetter as my body warmed up from moving. After some time, I realized I hadn’t given any attention at all to the sea, and shifted to feeling the pull of its depths and moving with the broken, asymmetrical waves as they were dragged back into the sea’s body.

At the beginning of the week, I had noticed a rare arising. My inner talk was gently confident and self-compassionate. In contrast, on this day, I could feel the drag of inner currents; and self hatred kept flaring. I dropped lower and returned attention to my circling feet every time I noticed my mind turn against me, or turn away from the feet, the wind, the sea, the feeling of rain and mist on my skin, the sounds of crashing waves and crying birds, or the smell of seaweed and salt.

I expanded my radius briefly but a heavy cache of sharp slipper shells was too much for me and I returned to a smaller area. The tide was climbing higher, leaving me just a thin margin of packed sand for my dance floor. A longing I don’t have language for swelled in my throat. I moved in this small space, and kept my wide pajama legs clear of the landing waves to avoid getting totally drenched. These factors became part of my dance, too.

As the sand darkened with wet, I moved into a short phase of Staccato. A lone beach walker with her rain jacket tied tightly around her face approached. I moved toward the water, making space for her as I sank into the hips, exhaling strongly and moving emphatically as the waves rose and crashed.

Chaos came and went quickly on this day. My spine coiled, curved, and twisted – gestures originating in the hips and tailbone, then whipping along the length of the vertebrae and out the top of the head.

I threw a piece of drift-plastic close to my towel so I would remember to put it in the trash can on the way out and a black-faced tern hovered just above it, thinking it might be a snack. More terns and several seagulls came rushing in. The wind caused them to jerk and wobble, ready to fight over it.

I rose up onto my toes and followed the birds, moving in light, extended loops as they expanded into wider and wider orbits, cutting the wind with the flats of my hands as they changed direction and arced back around. The wind passed right through me as much as it whipped my hair and clothing.

Stillness was several breaths of gazing at the wide horizon and balancing different parts of me against other parts.

This led into a yoga practice which seemed to last a long time. I moved around my small dance floor to find better packed sand for my hands and feet so I could balance more easily, frequently changing the direction of my front from east to west so a different hip would be tipping downhill. Sand caked my wet skin and pajama pants as I stretched on the ground.

Eventually I settled into a sitting pose just past the tongues of waves and wrapped a big towel around my shoulders against the rain, resting my hands on my knees. I usually spend time tucking myself into a custom-made sand cushion so I can meditate comfortably, but on this day, I moved effortlessly into a comfortable seat. I rocked side to side with the wind, wet and covered with sand, still subject to an indescribable longing, still grateful for time with family, and feeling absorbed by the elements, blissfully connected.

My brother walked onto the beach just as I was about to leave so I joined him for a swim before heading back to re-join the rest of the family.

This blog consists of my own subjective experiences on the 5Rhythms® dancing path, and is not sanctioned by any 5Rhythms® organization or teacher. Photos are courtesy of the author. Meghan LeBorious is an artist, writer, and meditation teacher who lives in Brooklyn, New York.