Summer means something to me. 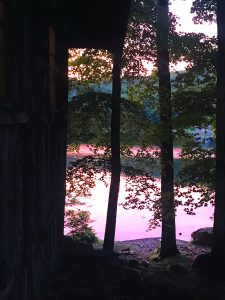 Daily routines during the school year can be crushing. Not only am I a teacher with a long list of roles and responsibilities, but I also work hard to support my own 12-year-old son in his learning.

There are many things to catch up on, projects I want to attend to, outings to plan, and many competing priorities.

But for the moment I’m in a Flowing space. Flowing is the first of the five rhythms in the 5Rhythms dance and movement meditation practice. It is receptive, circular, patient, grounded, and humble. It bides its time. It listens to the vibrations in the ground. It reminds me that if I try to charge forward without first finding my “ground” any actions will lack integrity.

It takes me awhile to change gears and trust that I don’t have to press to do every single thing in the most efficient way possible. I think it’s partly because the longer days make me feel like I have more time.

Even when I’m trying to work my way through my list, for the past week I’ve more or less drifted from task to task.

“You have to know what you want! You have to really see it, visualize it, know it as real, to make it a real thing!” Excellent job-seeking advice from a trusted advisor.

But I’m just not there.

I’m still detoxing, integrating, processing. I don’t know the way forward just yet. My practice at this moment has been to take a break from trying to know, and instead to dive into practice.

I played with weight in the rhythm of Flowing, imaging my feet were weighted, or that they were made of metal and the ground was a magnet. Before long, I also imagined that my hands were weighted, dragging me toward the ground after a dramatic rise, and pulling me into endless circling. Moving into the rhythm of Staccato, the powerful ground that had been established opened the doorway for exuberant expression.

I have nothing tangible to show for these many hours spent in practice. And yet, the time feels well spent. To be honest, I don’t think there could be any better use of my time.

Later, as I ate dinner on the back deck with family, the sky started to rumble and wind coursed across the landscape like contour lines on an elevation map.

I sat myself down to meditate by my little altar as the sky opened, wracking every surface with pelting rain.

I remembered another thunderstorm, this one during a meditation retreat at Garrison Institute that I wrote about in 2019, during a period of community silence and relentless heat.

“We were told there was a severe weather alert and that if we felt nervous we could take shelter on the lower level of the building. The storm tore the sky apart, and it was like the outside came resoundingly inside the soaring, once-Franciscan-cathedral main hall. Still in silence, several of us made our way to the front steps where we had a view of the sweeping lawn and river. The pavement and plants gave off steam. Mist exhaled into the entryway and landed coolly on my exposed arms, legs, and face. A white cliff-waterfall on the other side of the river tripled its size. A woman seated next to me on the marble steps ate a crunching apple, savoring each bite.

Back in the meditation hall, the storm continued as mindfulness became increasingly concentrated. At one point, I realized it was too intense for me, and stepped into the foyer, intentionally interrupting practice. After a few minutes, I went back in and sat down on the cushion again. Then, I had a sharp, sudden sensation on the left side of my head, and was seized by the fear that I might be having a stroke. 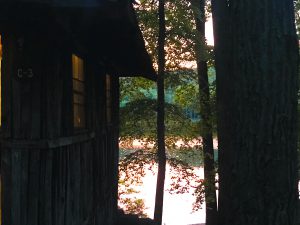 I remembered something the vipassana teacher, Dipa Ma, once told a practitioner who was freaking out during a sitting period. She sat next to him and said, “If you can stay with this sensation, you will accumulate great merit.” I settled down and the flash of pain and fear soon faded.”

Later I realized this was an important turning point in my path; and revelations poured through in the coming days. I have always loved storms, but now a storm can feel like a blessing.

In the evening, I finally sat down to write about practice.

Today new information about the January 6th insurrection also poured in, and I am amazed to find that my jaw can still drop. For now, I am gathering, receiving, biding my time, and listening to the ground.

Help Me to See 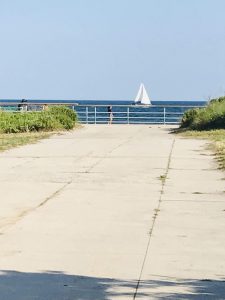 I just lived through a difficult school year as a teacher at a public high school. Now that the rushing river of the school year has emptied me out into the ocean of the summer, I’m finding that I need to re-align myself before I’m even in a place to set new goals or imagine my own way forward.

Flowing is the first rhythm in the 5Rhythms map. For me, it is a place of humility, of supplication.

Today I created a circle in sand to move inside of, then danced to birdsong and the laughter of a shallow river over rocks. A simple prayer came through:

Help me to know

Help me to see

Help me to feel

Help me to be

After this prayer arrived, I realized I need to allow myself to be less directed for a while.

For me, Flowing is where I re-align myself. Where I establish my mindfulness. Where I connect with my feet and let in whatever thoughts, emotions, sensations, or external phenomena appear, without forcing everything to have some kind of a supporting role in the ongoing story of myself. I try to move until it all flows by in the river of my mindstream.

Most days, I dance at least one full 5Rhythms wave as my practice.

Today, I was so absorbed in the rhythm of Flowing that I decided it was fine if I never left Flowing at all, and continued to circle, undulate, and rise and fall, different parts of my feet edging into the soft sand.

For now, I’m taking a break from professional goals, and committing myself wholeheartedly to personal practice.

Today, the rhythms of Staccato, Chaos, Lyrical, and Stillness did also arise, but I left with the intention to patiently embrace Flowing until Staccato breaks through and leads me in a clear direction.

***For NYC dancers, Meghan has a three-class 5Rhythms series coming up that starts on July 15. Join a single class or join the full series for a discount. Registration is required – visit https://www.eventbrite.com/e/heat-wave-waves-5rhythms-dance-movement-meditation-tickets-364331755087