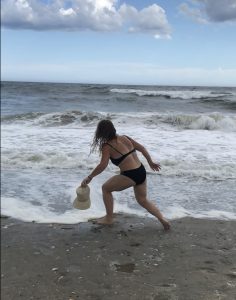 When I dance outside, getting to a place where I feel inspired to move is part of the odyssey.

Yesterday I went to one of my favorite places, Jacob Riis Beach, located on a narrow strip of land just south of Coney Island. Rising up on the bridge over Jamaica Bay, I examined the water level for information about the tide and judged it low. I had been with family just the day before during a very high tide with wild waves – at that time I dove in head first and sewed a line through the waves with butterfly stroke and navigated the huge crashing swells. But today’s lower tide left an expansive stretch of packed sand, perfect for a patient dance.

When I dance outside, I often seek solitude. If I am in someone’s view, I notice that some level of me is performing. Not a problem per se, but I appreciate when I have the opportunity to get over myself, to take a break from performing not only my dance, but also my identity. To connect with instinct and raw awareness, it helps to remove myself from at least the external gazes that are society’s constant surveillance.

I parked the car and my bladder started screaming immediately. From the start of the pandemic until recently, I danced at this beach every single week, and sometimes more often. I would park, use the bathroom, then head to the vast beach. My body reminded me of how entrenched our patterns become.

I walked to the farthest western edge of the boardwalk, then crossed the wide beach to the water’s edge and continued further west. This is the part of the beach you can only get to on foot, so it is much less crowded. Nonetheless, I passed bay after bay, marked by rock jetties or wooden pilings, nodded to people with deep sea fishing rods, and intrepid beachgoers with their daytrip-outpost-setups.

I picked up a plastic bottle to ferry to the trash, and was delighted to read “Holy Water” and note that it still had some fluid in it. I picked up several translucent, smooth, orange stones, and several bits of frosted glass that had been smoothed by the sea, thinking I might use them for an altar.

An older man walking for fitness came up quickly behind me, “They’re always complaining!” he said cheerfully, gesturing toward two american oystercatcher birds with their skinny, bright orange beaks. He sailed by, stepping jauntily, his broad chest lifted to the sun and his palms upturned.

I remembered another beach walker, one frigid winter day when the beach was practically deserted. She moved with the same delighted presence, in an ankle length fur coat and bare feet, dancing along the water’s edge. At the time, I wondered if she might be a spirit or a deity.

I made it almost to the big cabana buildings in Point Pleasant and decided to pick a relatively quiet spot rather than keep pushing for solitude.

I eyed a man who was laying down a towel far off on the other side of the beach while I drew a heart in the sand and placed the precious objects I had gathered  inside it. In a sudden inspiration, I also included a discarded water bottle and a clear plastic cup with a split on the side, deciding it would all be included as sacred today. Then I put a little of the holy water on my wrists and over my heart and added the bottle to the installation.

I walked in a giant circle around this centerpiece three times, preparing to step into practice. As I began to move in Flowing, attentive to the push and pull of the arriving and receding waves, the man on the other side of the beach strolled to the water’s edge completely naked. I eyed him with low level concern, but continued to move.

The air was heavy; and I found my engagement flagging. It took awhile for Staccato to ignite, but I did eventually make my way out of Flowing, and into the rhythms of Staccato, Chaos, Lyrical, and Stillness.

I used the phone to make a short video to help with an instructional idea, and when I looked at it realized I had no service. This concerned me because my son, Simon, was at day camp and I wanted to be reachable in case of any possible emergency, so I cut practice short and trekked back to the main beach where I would have service. Then I went for a brief swim, sat on the beach in meditation, and headed home.

Last night, I didn’t sleep well, but today is the last day that Simon will be at camp and I won’t be working, so after I dropped him off I again headed to Riis Park Beach, thinking that the lack of sleep might impact my ability to step into practice. This time, it was very much the opposite experience.

I arrived feeling disengaged, and left the beach feeling joyful, embodied, and light.

This time I had a hard stop at 12 because of a 1pm meeting, so I couldn’t go as far. I chose a spot just past the lifeguard beach and tucked myself behind the rocks. I shared the bay with only two people fishing in their loose long pants and sleeves and wide hats to protect them from the sun.

As yesterday, it was nearly 100 degrees, and I sprayed myself down with sunblock as I peeled off a layer to give more of my skin’s surface area to the wind.

I was definitely not alone, and instead of moving through the 5Rhythms decided to move with some fluid yoga poses. Yoga makes me feel like less of a weirdo than throwing down in dance.

I wasn’t sure if today would be just yoga, but as I got comfortable in the spot, I felt the pull to dance and followed it, beginning by moving with the push and pull of the arriving and receding waves.

In the 1997 essay “One Place after Another: Notes on Site Specificity” Miwon Kwon positioned site specific art –art that responds to its physical or cultural location–at the opposite end of a continuum from minimal, objective art like white cubes or large hunks of metal placed inside fancy galleries. The context of minimal art was as though it was birthed purely from the supposed genius of the artist, and could exist anywhere–a blue chip gallery, the middle of a public plaza, you name it. Self-contained, eternal, permanent, monumental. Site-specific art, on the other hand, acknowledged its interrelatedness and permeability, and even embraced and celebrated these qualities.

When I come to a new site, it affects how I move. It’s not like some genius dance gesture is just lurking inside me, waiting to show itself off. The gestures that appear are decidedly influenced by the context in which they arise. 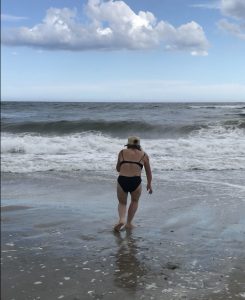 When I come to the ocean, there are so many things that fascinate and inspire me. As much as I love to dance to music, I can also dance the ocean, its crescendo, its decrescendo, its adagio, its allegro. The waves as they arrive and depart. The intersections and lively tussles between competing waves. The roaring crash as a wave dies. The moment right before a wave dies, when it has identity for a split second before it returns to its essence. The salt traces left temporarily behind. The ocean’s dense, dark depths. The horizon’s expansive trance. The gliding sea birds. The racing clouds.

Once I even danced from one low tide until the next, almost 12 straight hours of dancing with the ocean, following it through its daily cycle.

Today as I began to move with the push and pull of the waves, I suddenly noticed that I was staying beyond the edge of the water and recognized it as a habit I had developed over so many sessions of dancing in winter boots and snow pants during the frigid winters, when stepping into the water would be a bad idea.

Noticing, I stepped into the surf, my feet waking up to the cold sensation of the water. I was much more immersed now, feeling the pull ahead of me and uphill as the waves receded, rising and falling up and downhill, threading down the edges of the arriving and departing water.

I stayed in Flowing for a long time, not sure if Staccato would ever emerge. Eventually, I got interested in the edges between the waves, and found ways to express them with my body, exhalation building in force. I slightly wondered if the couple on the blanket on the other side of the beach noticed how much more interesting my dance had just gotten, but left it alone and continued to move with the breathing and crashing ocean.

Chaos came in its time, and threw the hat I had been so carefully using to shield my face from the sun down onto the sand as I was flung in infinite directions, noting the crash of the waves when the form that has gathered itself into a definable shape explodes with force and shatters into mist and nothingness.

Today Lyrical visited me with full expression, and I dashed and lept all over the wide beach, beaming, casting my fingertips down to the sand, then lilting back upward to the sky. If they were watching me at all, the people were appreciating this part – this unbridled joy despite the oppressive heat, despite the state of the world, despite the zoom meeting I would now have to rush to.

Stillness whispered every part of me. I saw the wide horizon, felt the ocean’s dark depths, rose up onto my toes, balanced, sank, rose and sank again.

I’m so lucky I’m not a genius. That would be so much less fun!

***For NYC dancers, Meghan has a seven-class 5Rhythms series coming up that starts on October 14, “Paint My Spirit Gold.” Join a single class or join the full series for a discount. Registration is required – https://paintmyspirit.eventbrite.com