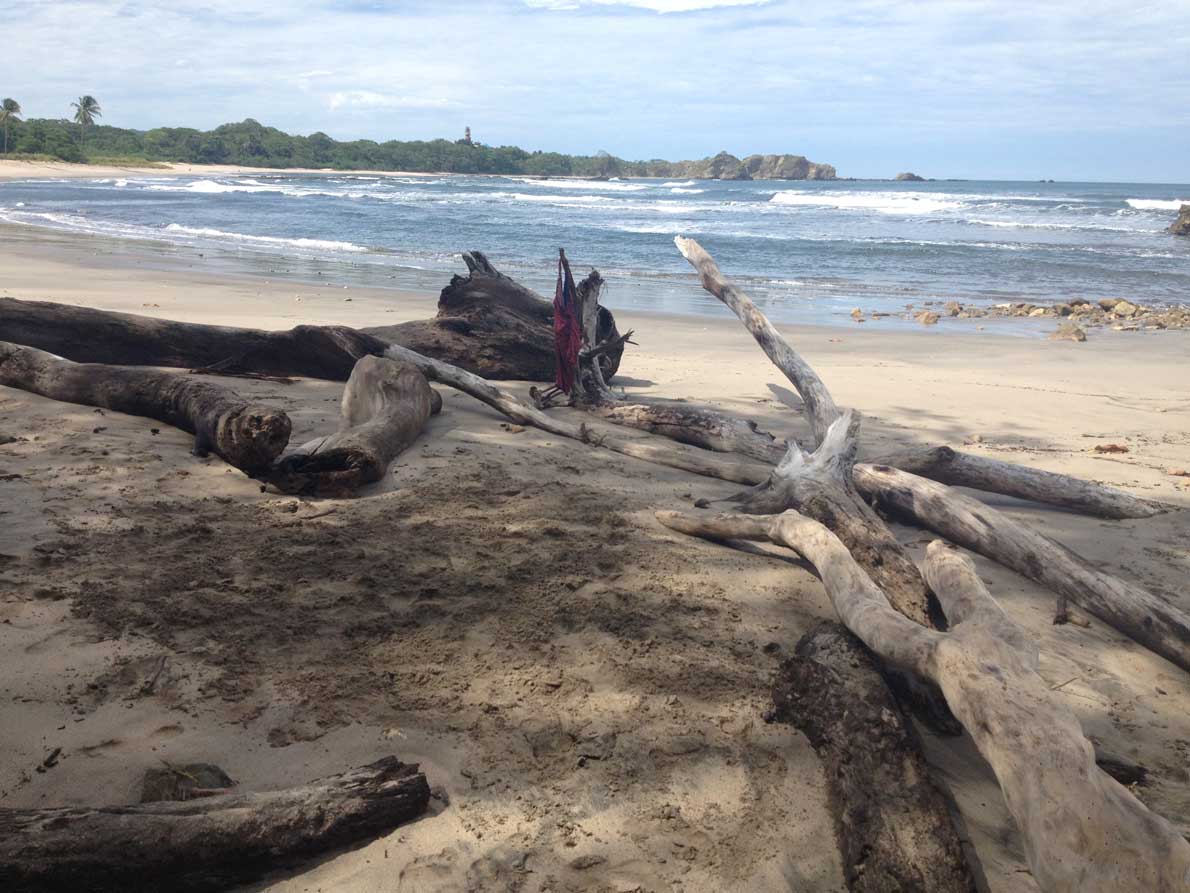 Aspects of today were grueling, but in the morning I found a more inspired connection to the 5Rhythms than I have experienced since I arrived in Costa Rica. After I dropped Simon off at camp, I headed to the closest beach, Playa Pelada, parking the golf cart I have been using to travel the dusty, torn up streets, and walking to the beach’s farthest reaches. High tide was just receding when I arrived, and the spot I have come to favor over the last few days was out of reach.

I felt, again, languid, and wondered if I should consider a second cup of tea for breakfast the next day. I found a ring of driftwood—of drift trees, actually—that had been deposited by a recent high tide. It was awesome to consider the power of the water that moved such massive trunks, and many of them were smooth and gnarled, the sea having worn their texture away to reveal their elemental forms, their many unique twists, swells, forks and straight sections.

I endeavored to enter Flowing, dancing in the circle formed by the trees. Before long, I was climbing onto the trunks to dance and move, noticing my fe

Oh my god! The bugs as I sit writing are unbelievable! A four-inch long praying mantis just dive-bombed me.

Ahem! Noticing my feet as I stepped onto, over and under the driftwood. Before long, I was in the sand between the trees, moving in inspired circles. I realized that along with dancing near them, and with them, I could also respond to their gestures—some contorted, some straight, some

Agh! Oh my god! Another beetle in my hair. There must be an easier way. I just put a baseball hat on. There is no where to sit but at the table on the open balcony—tonight it is raining heavily and gazing out into the starless night, there is only a black void. The insects are particularly aggressive, perhaps wanting to escape the rain.

I gave up on the balcony. Now I am sitting inside on the bed, my son crashed out beside me. There is still an alarming number of insects inside, but it is a considerable improvement. The only problem is that it is difficult for me to write in bed. I don’t think properly.

Where was I? Oh, yes. Contándoles de la mañana—telling you the story of my morning. As I started to move with the gestures of the driftwood pieces, I became increasingly engaged. The driftwood was partially buried in the sand, and did not move at all, as I would expect fallen trees in the forest to move as I walked on them. I moved over, under and around the pieces, but also worked around in circles, delighting in the feeling of smooth wood and yielding sand. I was investigating the ground as a changing, responsive, unpredictable thing, rather than the perfectly flat floor I am accustomed to.

Moving through the wave, before long, Staccato arrived with its sharp exhalations and energetic expressiveness. I was easy in Staccato, and again considered the directed force of the waves as they carved the cliffs around me. I experimented with some expressive movements telling that story, rushing forward, swelling and crashing or hitting. I found myself, predictably, deep in the hips. Next, I moved into Chaos—removing my hair elastic and rolling and tossing my head, looping around the space of the sand between the driftwood trees—again, easy yet energetic. Lyrical was pure delight—pura vida, even, a phrase Costa Rican people say often. I rushed and soared, again climbing up onto the driftwood, with high, suspended kicks and long, dramatic steps.

Stillness arrived suddenly when I walked out onto a driftwood trunk that was four feet off the ground at its extremity. I froze, my arms raised for balance, and took in the sky, the sea, some distant beachgoers and the variable wind as I balanced there for a few moments.

After this lovely little wave, I investigated the beach where the tide had further receded. I found another good spot and spent an hour or so moving with yoga poses—both on the wet sand and on a smooth section of the cliffs.

From there, I moved into sitting meditation. First I seated myself in a smooth perch on the cliffs. As I sat, small bits of shaly rock scampered down the cliff and startled me when they hit my back. Eventually, I moved to a different spot in the sand, where I would be safe in case any larger rocks dislodged from the overhang above me. After a peaceful, patient sit, I created a small artwork, photographed it, then began the journey back.

On the way home, I discovered that I did not have my bankcard. I did not freak out, assuming I would find it at home somewhere. I did not. I spent the rest of the day trying to figure out how to access money, rather than writing (which is why I am contending with these gigantic bugs while trying to write now). To make the day harder, there is a major road construction site right in the middle of everywhere I need to go. The golf cart, which I call the carrito, bumps emphatically along; and we are totally exposed to the life of the street and to the astonishing quantity of dust that moving vehicles kick up—to the point that all of the plants near the roadside are visibly laden with dust.

The evening was more fun, Simon and I met with friends and, amongst other adventures, enjoyed ourselves at the beach as the sun set, leaving quickly after as the sky rumbled and was torn across with lightning. We arrived home before it started to downpour and enjoyed a traditional meal, cooked on a hotplate and served on the balcony until the giant bugs drove us inside.