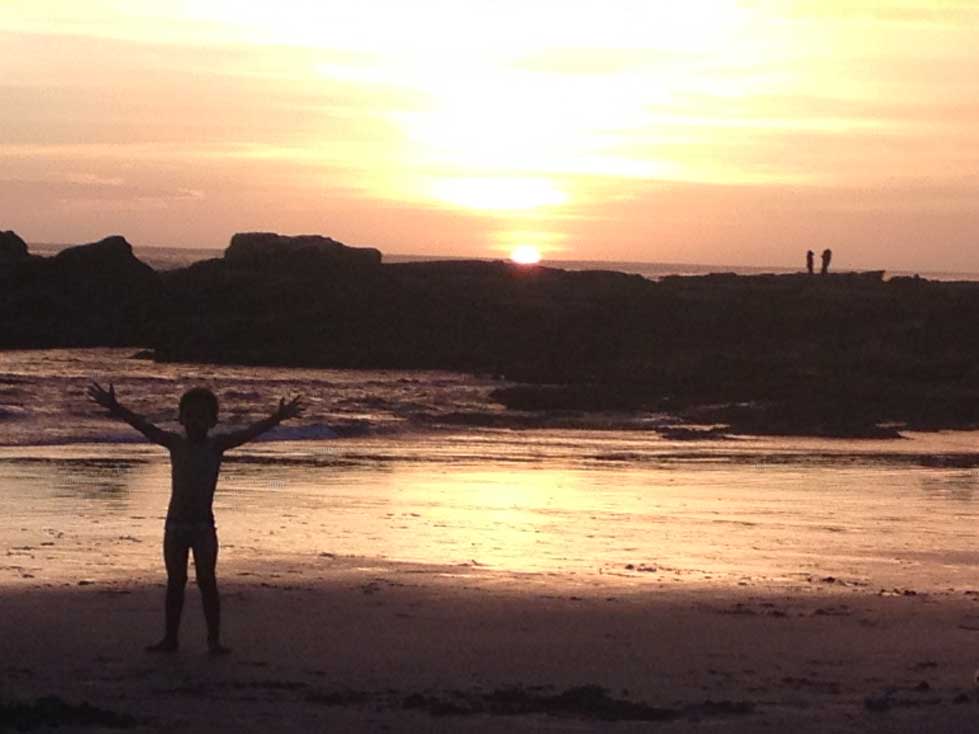 I managed to injure my neck on the one day I wasn’t doing anything strenuous. I was grateful to put myself in the hands of a highly-skilled new masseuse offering discount massages; and left feeling radically improved. Regardless, I got a late start and I was airy, sleepy. I made my way to my favorite place at the farthest reach of Playa Pelada, though most of it was submerged in high tide by the time I got there. I returned to the grove of trees backed up to a cliff that I described recently. There, I adjusted a section of sand by clearing it of rocks and debris left from a recent very-high tide.

My dance was tiny. I was nearly lethargic. Since I have set the intention to finish a wave once I start it (at least for the duration of my time in Costa Rica), I moved through each of the five rhythms without strong engagement. Often, I am swept away at some point, but this time, I continued to move subtly throughout the duration of the wave.

At the wave’s completion, I formed the sand to make a comfortable cushion and placed my dress over it, then sat down to practice sitting meditation. I sat peacefully for a long time, swaying slightly, and wondering if high tide might at some point overtake my perch. This seemed like the correct activity after such an intense massage. After awhile, an artwork came to mind. I left my seat and set about making it, further investigating a motif and also a theme that have been compelling for me lately. I photographed the piece, then set out to return home, have tea and write.

I forgot to relate a very important event: I surfed! It was low tide and I was under the direction of a qualified teacher, but I still surfed! It is such a focal point of life around here that I couldn’t resist, despite my adored mother’s vocal concerns. I surfed only one other time—before I was pregnant with my son, Simon—at Long Beach in New York. I was afraid as we walked to the beach with the big, stable surfboard, but my fears disappeared as the teacher, Keylor, explained the physics of surfing by drawing on the sand and we got into the totally-manageable waves. After the lesson Keylor let me keep the board for awhile and I continued to practice alone. I managed to “catch” several waves and stepped gracefully down off the board at the end of most “rides” rather than tanking myself in a sideways belly flop. I note that I have good balance because I am very comfortable with moving in and out of balance; and I suspect that thousands of hours of practice in the third of the five rhythms, Chaos, might be a contributing factor.

I picked Simon up at camp and we went home to rest for a short while. It was difficult to motivate him to leave the house again, but I finally succeeded in getting him out the door, with the intention of meeting some friends at the beach. Just as we stepped outside, he climbed up onto a chair, then swung wildly from the porch hammock seat. On dismount, he hurt his toe, stubbing it hard on the rough ground. I had asked him again and again to avoid swinging on the chair, and when he fell I felt anger rather than compassion, especially since he had been so resistant about leaving despite our earlier agreement. Usually, no matter how angry I am, if he gets hurt, I comfort him, without any mixed messages. This time, I said, “I asked you again and again not to do that! And now you are hurt.” I comforted him, also, but was still feeling tight and angry. After a few minutes for inspection and recuperation, I more or less dragged him along, and he continued to cry. It was several minutes before real compassion broke through and I stopped the golf cart carrito, saying, “Oh, you are really upset. Do you want me to unbuckle your seatbelt so we can have a big hug? I am sorry you got hurt. I am sorry you are so sad.” He hugged me tightly, finally calming down. I wished I had been kinder, earlier.

I am happy to report that I surfed again. Again, with Keylor’s guidance. Again, it was fabulously fun. Although I need to work on timing, once I am upright my balance is good, and I experimented, smiling and dancing a little as I rode slowly in on the already-broken waves, sinking low, rising and inching my feet forward and back along the stringer—the centerline of the board—to see what would happen. I told myself to relax and look at the space around me even if it meant that I didn’t get on top of the board as quickly, as I have a tendency to move in a panicked, myopic rush when time is of the essence. Keylor has determined that I am ready to go “outside” past the breaks in our next lesson. I was feeling pretty confident and continued to practice after the class ended. Unfortunately, I lapsed on a very important lesson: do not put the board perpendicular to your body in front of you as a wave is approaching, or you will get whacked in the face. And I got whacked in the face. Directly onto my right-side front tooth. It hurt but was not excruciating. It is definitely a bit loose and I have decided to stick with fluids for a day or two in the hopes of re-habilitating it. I was by all means humbled, and learned an important physics lesson.

We met friends at the beach and played in the waves as the sky lit with sunset.

A man flew the kind of kite you use for kite-surfing—with a string on each end of a huge, red, vertical kite going to each of his hands, used to control its motion. Simon and his friends ran, trying to catch the kite. I flowed in with them, and began to dance the kite’s movement. Although my morning wave had been lethargic, this sunset wave was alive with spirit. I covered vast distance as I swooped and arced, looped, lept, dipped, curved back, twisted and returned.   I watched my partner, the dynamic red kite, as often with my back arched and head spun backward as from the front of my field of vision—dancing with precision in vast, unending space. I played with the kids as I moved; and we threaded together as they played my game and I played theirs—kite chasing. In Staccato breath became sharper, great back steps traveled me many feet along the sand and I would kick, then change direction quickly while my leg was still in the air and the kite made a tight turn at its handler’s direction. In Chaos, I let my head go completely, loving the luminosity, space, freedom and softness the beach offered as the wind picked up and the kite’s movements became quicker and more erratic. Lyrical was a passing suspension, a brief release of the fingertips toward the sky. Stillness lasted just a few short moments as the kite temporarily stabilized at a point high overhead, for once not twisting and diving; and I stood with my arms raised, gazing upward in gratitude.

I would love to have danced longer, but Simon was charging into the water along with his friends and I needed to be close to him, as I know that even the relatively smaller waves of low tide are not to be taken lightly.