Dancing From One Low Tide to the Next (Everything is Perfect) 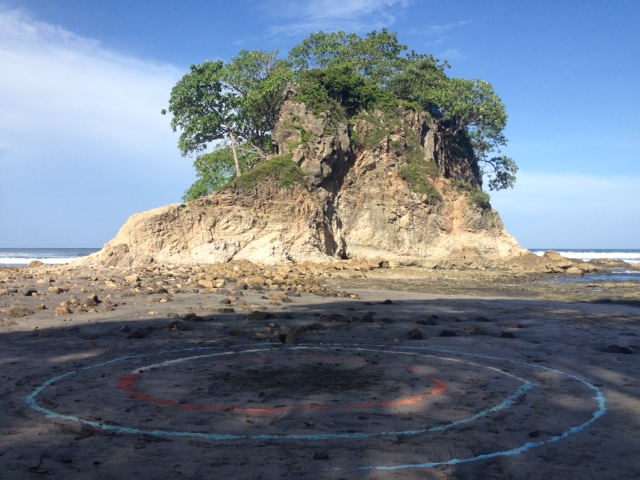 One day during my last week in Nosara, Costa Rica, I danced from low tide at 5:30 in the morning until the next low tide over twelve hours later—from 5:30AM to nearly 5:30PM. This was not 5Rhythms practice, but rather an artwork performance, a ritual, and, indeed, an endurance event. It was beautiful to witness the site—a place I have grown to love at the farthest reach of Playa Pelada—go from the first light of day when the cliff island in front of me was completely in shadow and a group of buzzards slept perched on a tree, to morning, when the shadow slipped down the island’s cliffs, then mid-morning when the shadow edge moved to the sand and slipped across it, finally overtaking me and thrusting me into the full light of sun. The night before the performance, as I compiled the things I would need to survive it, my uncle said, “This isn’t just a performance artwork. It’s a vision quest!”

I left home and walked to the beach when light was just breaking. I had several bags of colored salt with me to use somehow, and realized right away exactly what I should do. I created a large, rainbow-colored spiral on the morning low-tide beach. For the duration of the first low tide, I interacted with this creation as my centerpiece; and an interesting construction arose. I moved again and again between the relative and the absolute—I would walk through the spiral into its middle and dance in absolute space, where it was crowded with spirits and guides; then, when I wanted to be in relative reality, I would coil back out of the spiral, and there consider my own psychology, things of the world, and the phenomena of the senses.

I had been very concerned about hiring a helper for the performance, since I was nervous about being alone on the beach throughout the entire day. I called a friend and asked if she knew anyone who might be interested in a day’s work. She said she would ask her boyfriend. I never heard back from her, so I assumed he was not available. Once I got to the beach and started to work, I was grateful that I didn’t have a helper after all; but, to my surprise, my friend’s boyfriend appeared, trotting good-naturedly down the beach. I explained how he could help, then returned to dancing. Not long after, I told him I realized that I could absolutely handle doing the piece by myself, but that he could keep some of the fee I had offered initially. We had a beautiful conversation during which he asked if I was doing a ritual of some sort. He also told me that it seemed very much like a Mayan dance, as they, too, had danced into spirals—a valuable connection that gave rise to many ideas. “Is this curative?” he asked. “Yes, absolutely,” I answered. “Quien quieres curar?” “Who are you trying to cure?” he asked next.

Moving into the middle of the large spiral was like moving into the middle of the earth. This image connected with something that arose during a long, intensive session with a Reiki master the previous week. In the Reiki master’s very capable hands, I was invited to “journey” and some of the images from my journey found their way into my dance. For example, I imagined that I accompanied a dragon through a volcano into the earth’s hot core. In the dance, I went inside the volcano of my vision, where the lava purified and cleansed me of obscurations. In the dance, I became large in the space of the earth’s core, almost like I was a baby pressing inside a mother’s womb. At the end of the session with the Reiki master, she offered to empower me with a Level I Reiki transmission; and I gratefully accepted her offer.

I was deeply affected by this experience with Reiki. Reiki is an energy-healing lineage wherein the Reiki practitioner channels and directs universal energy to invite positive transformation. In my case, transformation on many different levels took place at once. The teacher called on the Reiki spirits repeatedly, asking them to help when she gets “in the way.” She emphasized again and again turning toward light, and doing everything in service to light and love as she channeled the energy of the universe to help me to heal and to thrive.

At the beach, I stayed in Flowing for ages. Even with the excitement of the Reiki-influenced vision, I grew languid and was captured by the weight of inertia for some of the long period of the first low tide.

The very same day as the Reiki empowerment, my five-year-old son, Simon, and I were joined by my uncle and cousin, who would share our final week in Costa Rica. This was a slightly jarring transition, and I found myself irritable, trying my best to be loving and grounded, but not always succeeding. My uncle and cousin are very easy to love, but I noted the depth of the work I had done so far in the month and my aversion to abandoning my own deep engagement. Too, I noted the change in our relationship to the place. It felt like we shifted from being members of the community to being tourists. To make it more challenging, Simon started to act up—absolutely crowding my cousin’s space again and again. The two of them vied to be first, to get the biggest, to be the best, to unlock the door—anything and everything seemed to lead to bickering. My uncle and I have similar parenting styles, but when you are together every minute of every day for several days in a row, even small differences seem huge.

For the day of this long dance, my uncle had Simon and my cousin—his daughter—for the entire day, from sunrise to sunset. They came to see the performance at around 11AM, after I had already been dancing for five and a half hours. By then, one great wave had rolled up and erased the entire rainbow spiral design.

The swells of high tide crashing, swirling and colliding around the cliff island gave me a lot to respond to during the entire phase of high tide; and, despite feeling tired at moments, I became engaged and inspired. Rolling, turning, following the waves, walking the edges: I immersed myself in participating in the dynamic activity around me. At times, the waves coming from the two different sides of the cliff island faced off, crashing into each other, vying for dominance, pulling, pushing, twisting and receding—the soft plane of white salt bubbles moving calmly back beneath a newly presenting wave. 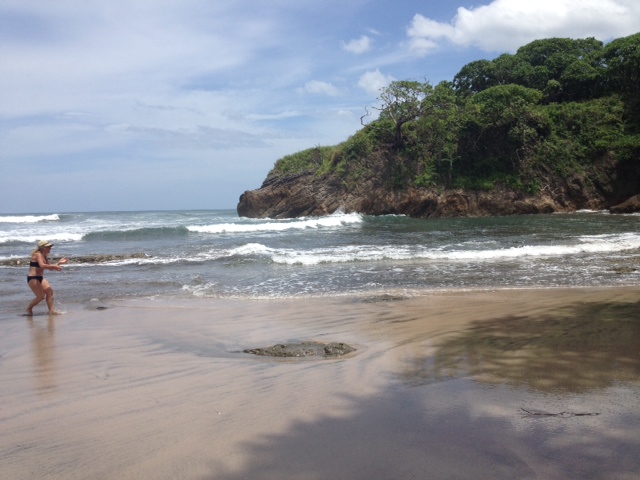 The woman who owns the (spectacular, beautiful) place we were staying, Nosara B&B Retreat Center, appeared during the early stages of high tide. She advised me that a friend and her sister were waiting at the Retreat Center to assist me with the piece. I was, as when my friend’s boyfriend appeared, confused. I had asked my friend if she knew anyone who might assist me with the performance, but since I hadn’t heard back from her, I assumed she hadn’t found anyone. I told the owner to please let my friend and her sister know that I worked it out, and no longer needed help. This was not without torn guts and stooped posture, however. I reflected that every action in the world involves a terribly high risk of causing harm. Self-dislike sparked, as I feared that I had taken people’s time lightly and failed to communicate. Though I realized no one was devastated, it still made me want to repair to a dark cave and live in seclusion.

My contemplation for the month was “Everything is perfect.” Many different takes on the phrase came to mind, but I especially considered the belief that absolutely everything that arises, including very uncomfortable or even painful feelings and events, are part of the exact material that we can use to wake up to our lives. Twelve hours of dancing gave me plenty of time to experience both sacred beauty and afflictive emotions, including self-dislike and the belief that I had caused harm.

My uncle was supportive when I shared this reflection during their visit to the performance. As they were leaving, he said, “I hope you find what you are looking for.” This wish touched me deeply. He also said, “It is great that you are willing to project this out. Not everyone is willing to do that.”

Owing in part to the blazing sun, the dance was more subtle than I had anticipated. I was grateful that I had not promoted it widely. Somehow, even the friends who were determined to come out and support could not find the site and did not, in the end, make it. Overall, the day evolved patiently. At around 2.30, I realized that if I did not sit down in the shade for a little while, I might faint or vomit. My uncle had the keys to the casita, or, to be completely honest, I might have called it a day and gone home. I found a small piece of broken surfboard and used it as a meditation cushion, settling into sitting meditation for over an hour in a tiny wedge of shade cast by a tall cliff. The landscape crawled, alive with hermit crabs, insects and lizards.

Gradually, the sun moved west and flared, illuminating the patient, gliding flights of the vultures—their shadows dancing over the sand. After this rest from exertion, I found another small burst of energy, dancing on the soft sand revealed again by the second low tide, dipping and casting a reverent arm toward the sea. I recalled my uncle’s wish of many hours before, “I hope you find what you are looking for.” Slowly, I brought the images of the many people in my life to mind and said to them, “I hope you find what you are looking for.” This was the only time during the day that tears erupted, as I moved softly, fascinated.