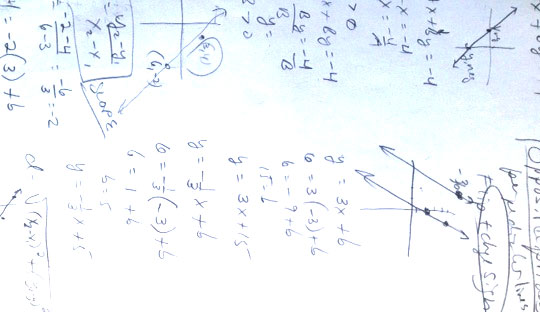 I have had Amber Ryan’s “Examine Stillness” workshop on my calendar for over a year. When I first spotted the date on Amber’s calendar, I emailed her, thinking it was a typo. She responded, letting me know it would take place in 2015, not 2014, and that the date was correct. I noted it right away, and have looked forward to it since that time. I am dismayed and, indeed, angry, to report that I was not able to attend today.

I emailed the workshop producer yesterday to let her know that I would not be able to attend as I was ill, and, too, that I have to take a big test tomorrow afternoon and need to study. I am feeling slightly better physically, but the test still looms. I have been teaching Global History and English in a high school in Brooklyn; and (in part because of a clerical mistake) I recently learned that I have to take and pass several exams in order to continue teaching. The one I am facing tomorrow is a Math test. The test includes Algebra, Geometry, Trigonometry, Statistics, Functions and Calculus. I took remedial Math when I was an undergraduate, and struggled even then. I already failed the test once, but was determined to beat it this time, and have immersed myself in studying for the past several weeks.

I don’t know if I am writing now because I am taking a break or if it is because I have given up. I am still struggling to master high school Algebra, never mind the higher-level concepts I will surely encounter on the test.

Peter Fodera taught Tammy’s Friday Night Waves class this week. I was not feeling well, but decided to attend and move gently, giving myself permission to leave early if I needed to. Arriving to an already active room, I flowed right in, even feeling joy and excitement as I found a safe spot for my belongings and began to move in the collective field.

During that afternoon, I had found myself sobbing after two days of school parent-teacher conferences. I sat with a co-teacher, receiving parents of our shared students both Thursday night and Friday afternoon. I was happy to offer compliments and good news to some parents; and also offered targeted suggestions when called for.

More notable was what the parents and students were bringing to us. It doesn’t feel correct to publish the specifics, but the hours were filled with stories of death, illness, abuse, challenges and sadness. Too, they were filled with resolve and the intention to persevere and thrive, but what lingered in the air was the tone of pain.

After the final session had ended I saw a student in the hallway. He introduced the family member who had come to the parent-teacher conference to support him. Both my colleague and I had tried repeatedly to contact someone from his family without success, as we were concerned that he was not succeeding academically. I also know that his history is pocked with severe difficulty, by his own account. The student’s family member, who I had not even known about, professed great love and support. I was incredibly relieved that this kid had someone to look up to and to watch out for him. I know it is not professional, but I started to cry. I tried to turn away, but the student lingered. “I love you, Ms. LeBorious,” the student said, leaning over to hug me. I hurriedly sent them along to another teacher, shut the door to the room and broke down.

I was happy that I made it to Friday Night Waves class, despite not feeling well. I moved without any effort, relaxing into the music. Peter had been thinking about the Paris bombings; and he decided to select music with the theme of love in response to the events.

In the rhythm of Chaos, I alternated the pace of movement, slowing and softening—almost going slack, then bursting into a new flurry of gestures. I kept sneezing and blowing my nose, even in the excitement of Chaos.

I did not partner as much as usual, preferring to keep to myself. I felt more subtle than expansive, and more gentle than emphatic. I shared several dances, including with one of my favorite partners of all time, but in most cases disengaged after just a song or less.

After the first wave, I decided to take it easy and head for home. I knew I had left my water bottle in a particular spot; but I could not find it. I pawed through bags and jackets to no avail.

At the same time, Peter paused the music briefly to offer verbal teachings. He shared that he had been in Berlin the week before when the recent bombings took place in Paris. A close friend—another 5Rhythms teacher—was practicing alongside him. She was from Paris and had left her young child in another’s care to attend the Berlin workshop. She thought about returning right away, but in the end decided to stay in Berlin and dance.

Peter’s message was clear. You can always choose love. You can always make the choice to turn toward love, no matter what you face—even when there is great fear. Knowing a little bit about Peter’s personal story, this pronouncement has even more weight. He carries some heavy challenges, yet he smiles with his entire body, dances with everyone he encounters and seems, by all accounts, very, very happy. “That is one of the things I love about this practice,” he said. “You can fall in love with everyone! Why not? Why not fall in love with everyone?” He asked, smiling, holding both hands upward as his eyes moved around the room, making eye contact with the many seated dancers gathered around him.

I sit here writing, knowing full well that I should apply myself to studying, and at once feeling doomed. I will return to the studying shortly, but for now I have a little more to say.

I finally located my water bottle, which had been knocked off the end of a table and buried by piled-up coats and bags. I decided to stay just until the next wave started, to avoid being rude while Peter was talking. Then, Peter told us he had selected music with the theme of love (teasing himself a little—I guess for his supposed sentimentality); and I hung my things on the studio doorknob, deciding I would stay for just one more song. I was tired, but the music motivated me.

After the first song of the wave ended, I stayed for just one more. Traveling around the room, I passed a friend who was dancing on the floor—not wanting to put weight on a foot that was bound in a soft cast. I put my hand on my heart and met her eye by way of greeting, thinking I would continue to move through the room, but instead found myself pulled in to dance with her. In Flowing, we danced with increasing expressivity, never rising to our feet, but instead arcing sideways, spinning on the floor and undulating—smiling all the while.

With just 25 minutes left in the two-hour class I did finally leave, thinking I could at least get a little studying in before I went to bed.

The next day, I studied some more. I arranged for a friend to take my son for the afternoon, though Saturday is my only full day with him, and continued to study. Material did not seem to be sticking. In a way, I was trying to learn 15 years of Math in just a few weeks. I felt discouraged.

My five-year-old son woke up as usual before dawn, and, as he stretched his back and rose to consciousness, muttered, “Mommy, are four sets of nine thirty-six?”

That day, I studied some more. I re-did some practice tests and got many of the things I got right a week ago wrong this time. I started to entertain the idea that I might, in fact, not be able to pass the test. That I might lose my job. I even started to think about where we would move if I didn’t have a job and couldn’t afford the rent any longer. Anxiety took over. I thought of all the unfair, horrific events and deaths that have touched me in recent years. I thought of my son’s father—unemployed for far too long. I thought of losing my parents one day. By this point, my mind had completely taken over. I even started to feel anxiety about imagined, projected events of my son’s teenage years, which are still over a decade away.

Another thing that plagued me was that I couldn’t stop thinking about my 22-year-old friend—my son’s babysitter—who has been in a coma for three weeks. Thankfully, she is starting to regain her senses, but she is not communicating at all yet. I finally found out what had caused it—her doctors think she had a stroke. A stroke. I just couldn’t manage that.

By the end of the day, I started to see the tricks my mind was playing on me. I attended a yoga class, and, immersed in embodiment, found language for what I was experiencing. Simply put: fear. I was afraid and aversive. I was angry at the injustice of my situation. Slowly, I let myself open to the fear I was experiencing; and to the reality of the situation I was embroiled in. Really, it was just a slight shift of perspective. The only thing I have some measure of control over—really, when you come down to it—is how I choose to deal with what I have to deal with. Whether I am open to it or not, I still have to deal with this crazy test somehow.

As a result of opening up to my own fears, I noticed my compassion for other people in impossible situations. I felt compassion for the many teenagers I teach who try and try and cannot pass the difficult state exams required to graduate. I also thought about the many Syrian refugees—fleeing danger and violence and stepping into total uncertainty. People in abject poverty. People with terrible illnesses. And, too, all of the people in the exact same situation I am in—having to pass the Math CST test in order to continue teaching despite the fact that they don’t teach Math and have not been trained in the material. Opening to my own pain, and to everyone else’s, softened me; and I spent much of the class crying, with my forehead on the floor.

The anger that I had experienced initially toward an unjust system had dissolved completely; and I was reminded that the measure of my humanity is not just my ability to surmount obstacles and to set and reach goals—but is, too, defined by my ability to open to everything that arises in my experience, even when my circumstances seem impossible and the air seems filled with pain.