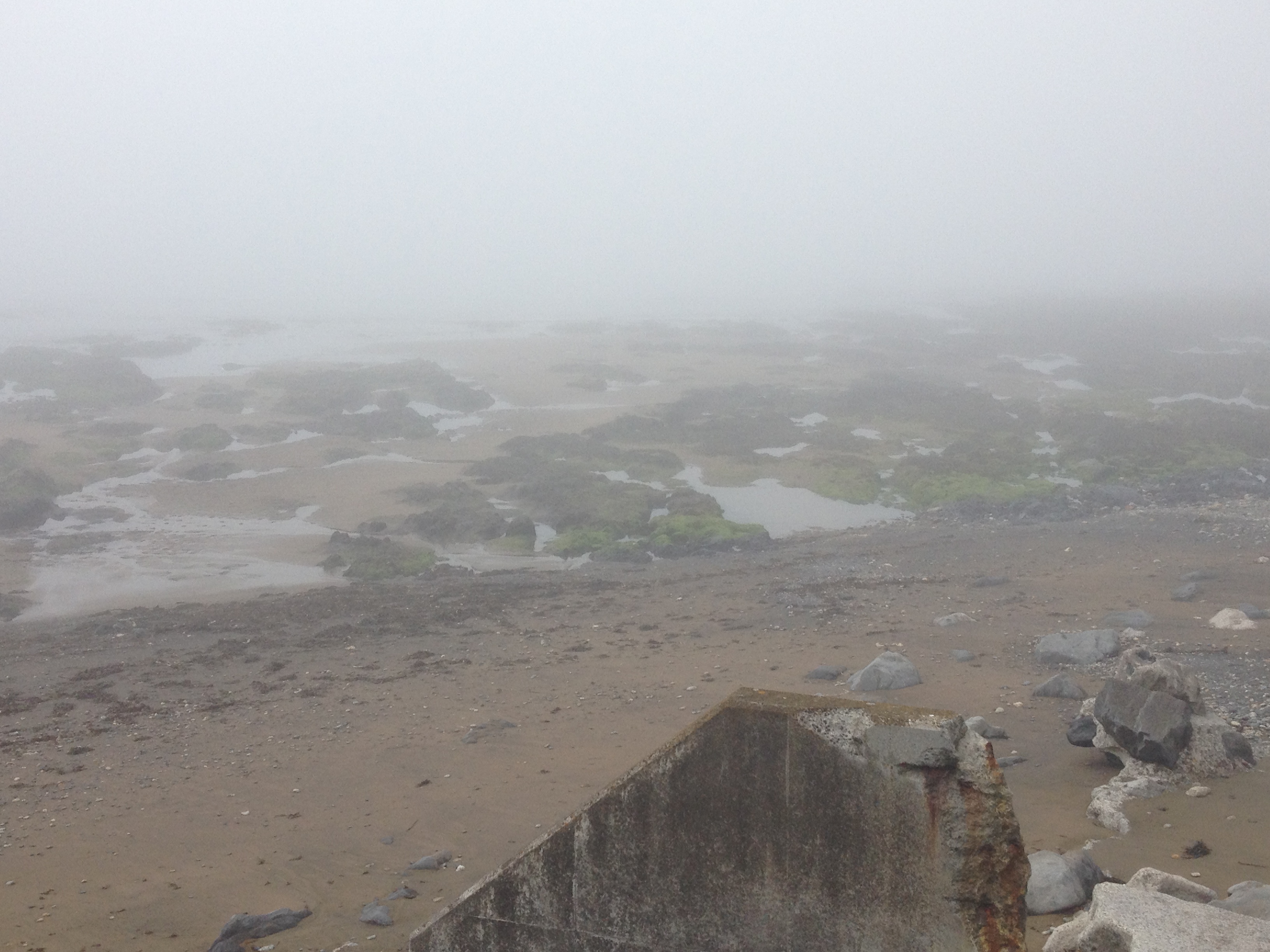 Otherworldly fog took over the landscape on Monday.  After dropping my six-year-old son, Simon, off at camp in Dunhill, I went to the unmarked beach again.  Suffering from heavy anxiety, I paused to look out over the vast beach from the top of the steep cement stairs, and the line of vision was severely blocked by the heavy white cloud.

Exploring and seeking an inspiring place to dance, I walked west, passing several beaches that were framed by giant, fallen boulders.  I came to a cave (or perhaps the shaft opening of an old copper mine) and investigated briefly, then suddenly realized that I had no phone reception whatsoever. I was nervous about being out of contact while Simon was at camp.  Lately, I have been unusually nervous about keeping us safe, given a series of mishaps.  Simon has also been nervous, asking me to sketch out endless scenarios of what would happen if one of us got hurt or died during the trip; and he has been unwilling to be apart from me in any room of our friend’s 300-year-old cottage, as he believes it haunted.  I have tried to calm his fears, but at times I have also felt afraid.  I held the phone in my hand and walked back toward the cement stairs, staring at the screen and pausing whenever it said, “searching.”  I settled on a still-remote-from-the-stairs spot with very black sand where the signal flickered in and out.  I put the phone on a rock where I could check on it, created a large circle in the sand that I could dance inside of, then settled into a patient Flowing.  As Staccato arose out of Flowing, I went to check the phone and realized that it was again saying “no service.”  I tried to talk myself into letting go of the nervousness about being out of contact.

In the end, I was able to re-connect with Flowing despite pausing to check my phone.  I danced a brief wave, moving through each rhythm:  Flowing, Staccato, Chaos, Lyrical and Stillness.  Resuming after the pause to check the phone, I realized that despite the fog and mist, the day was warm.  I took off my clothes.  The feeling of the cold mist on my skin helped return me to my senses and release the anxiety I was feeling.  It was exhilarating after being so wrapped up in garments for so many chilly days.  Before long I returned to a bathing suit, completing the wave fairly quickly.  Stillness emerged vividly and the felt senses of the cliffs, the sea, the mysterious and heavy air, and the rocks and boulders found their way into my movements.

Then, I moved to the opposite end of the beach, where it was much less remote, but where I did have reception.  For this second wave, as with the first, I started by creating a circle in the sand to dance inside of, though I did not stay inside it except for in the beginning of Flowing.  This wave was definitely practice.  Bits of beauty flecked it, but I was not particularly inspired.  I was left thinking about how anxiety blocks receptors to everything—to danger, to joy, to fluid experience, and to the constant stream of information we receive from the world around us.

In the brief time I had before picking Simon up from camp, I made an unsuccessful attempt to find an ancient site that my friend had urged me to visit, but the next day (Tuesday) I was determined.  I re-traced my driving steps, remembering not to turn down the tiny, stone-walled lane where I had aroused suspicion the day before.  I had a map my friend’s archaeologist neighbor had given me, which included all of the small rural roads.  Even armed with it, it was very difficult for me to navigate.  I was told the site was just next to a cow field, and that it was locked gate but that there was a stile—a gap in the gate—that allows people to enter.  That description seemed to match pretty much every gate I passed.  I asked a woman who was walking on the road if she knew of the site, and she scrunched up her face, looking upward to think and pointing downhill.  “I’m not sure, Pet.  I think it might be down there, but they’re building a house there now.  I suppose you could go there and ask if you could enter.”  I felt discouraged, but decided to go just a tiny bit farther down the road.  Shortly, I actually did find what I was looking for—indicated by a discreet arrow sign that said, “Gaulstown Dolmen.”  I walked through the stile, down the driveway, through another entrance, then down a wooded path.

The monument is remarkable.  It consists of six very large, flat stones that were placed in a Stonehenge-like configuration around 5,000 years ago.  No one knows exactly how, as they appear to be extremely heavy.  According to the archaeologist, it is likely a burial site, based on nearby similar sites that have been excavated.  There was a small clearing around the dolmen, but it was very much enclosed with grown over trees and grasses.  I sat for a few minutes, then got up to walk in a circle around it.  Prickers caught my long skirt; and I moved into a flat spot to dance in Flowing.  Absorbed, I imagined a low, chanting hum as I listened and sensed the place.  I saw a moving black shape out of the corner of my eye that could have been the farmers’ dog, but that got me to thinking of ancient spirits.  Staccato was brief but expressive.  In Chaos, I stepped right inside the dolmen, wondering if it had also been intended as a portal.  I was slightly afraid of the possibility of possession and at once totally fascinated.  In Lyrical a flash of creative energy entered into me.  In Stillness I moved with reverence—an homage to the ancients.  I was left feeling like I should do what I can to develop my capacity as a mystic, and that all I need is available in every moment, if I know how to pay attention properly.

Later, I went again to the secret beach.  Reception was better without the fog, and I choose a spot that was not as remote.  Still, the phone came in and out.  The day before I’d told myself, “Maybe I can be ok with being out of reach for a little while.”  When it came to it, I was still nervous, and couldn’t bring myself to practice until I found a spot where the phone would have at least one bar.  I stayed in Flowing for a long time, returning to the image of the dolmen again and again. 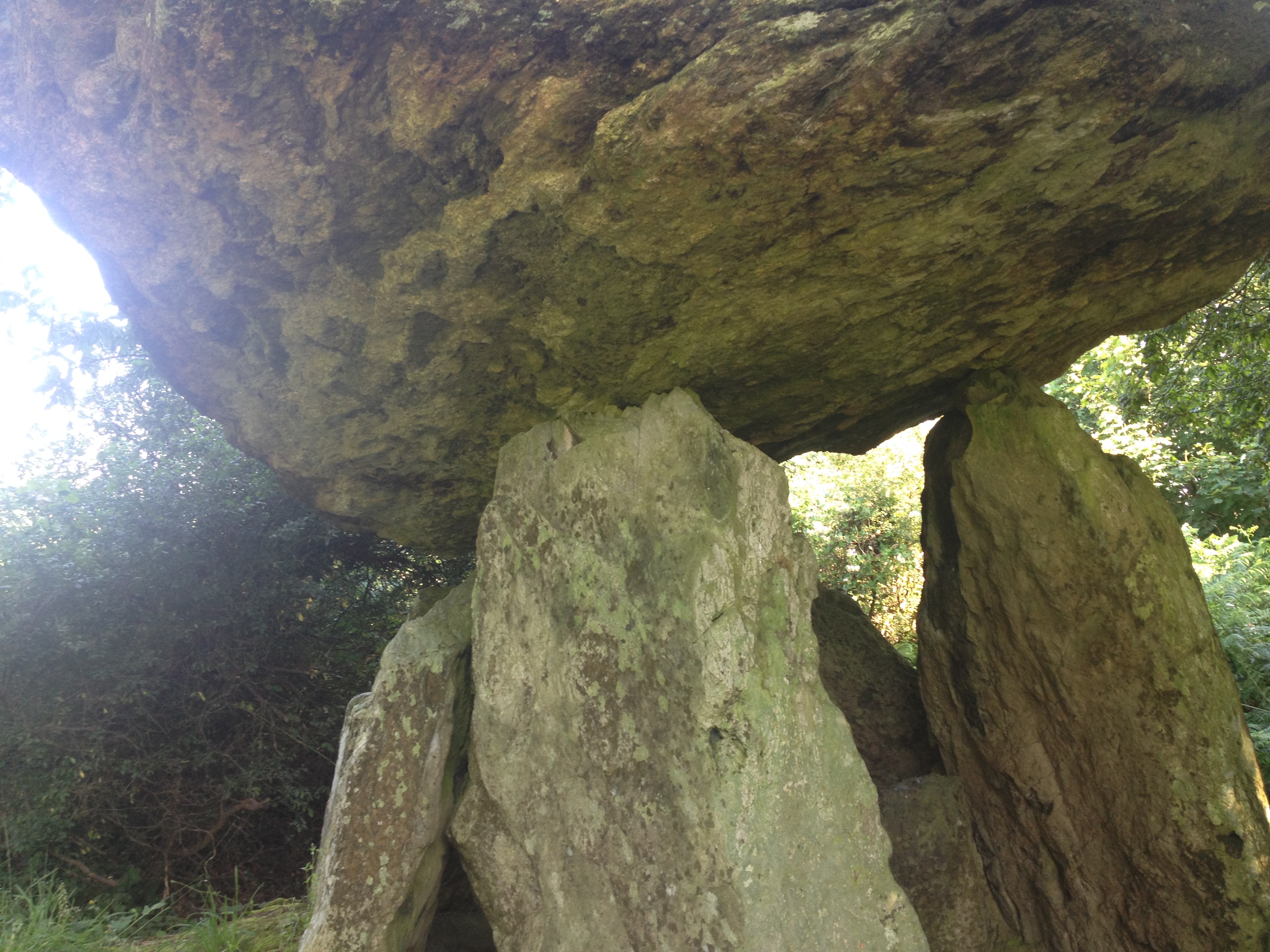 As with previous dances, threads of Stillness continued to present, for example during Flowing when I witnessed a bird soaring absolutely in place, not moving at all, buoyed by strong wind.   I realized that at times I have confused Inertia—which can present as a lack of energy and is considered to be the “shadow” of the rhythm of Flowing—with Stillness.  Stillness, as it continued to present during my many dances with the land and sea in Ireland, was very much invigorated and alive. 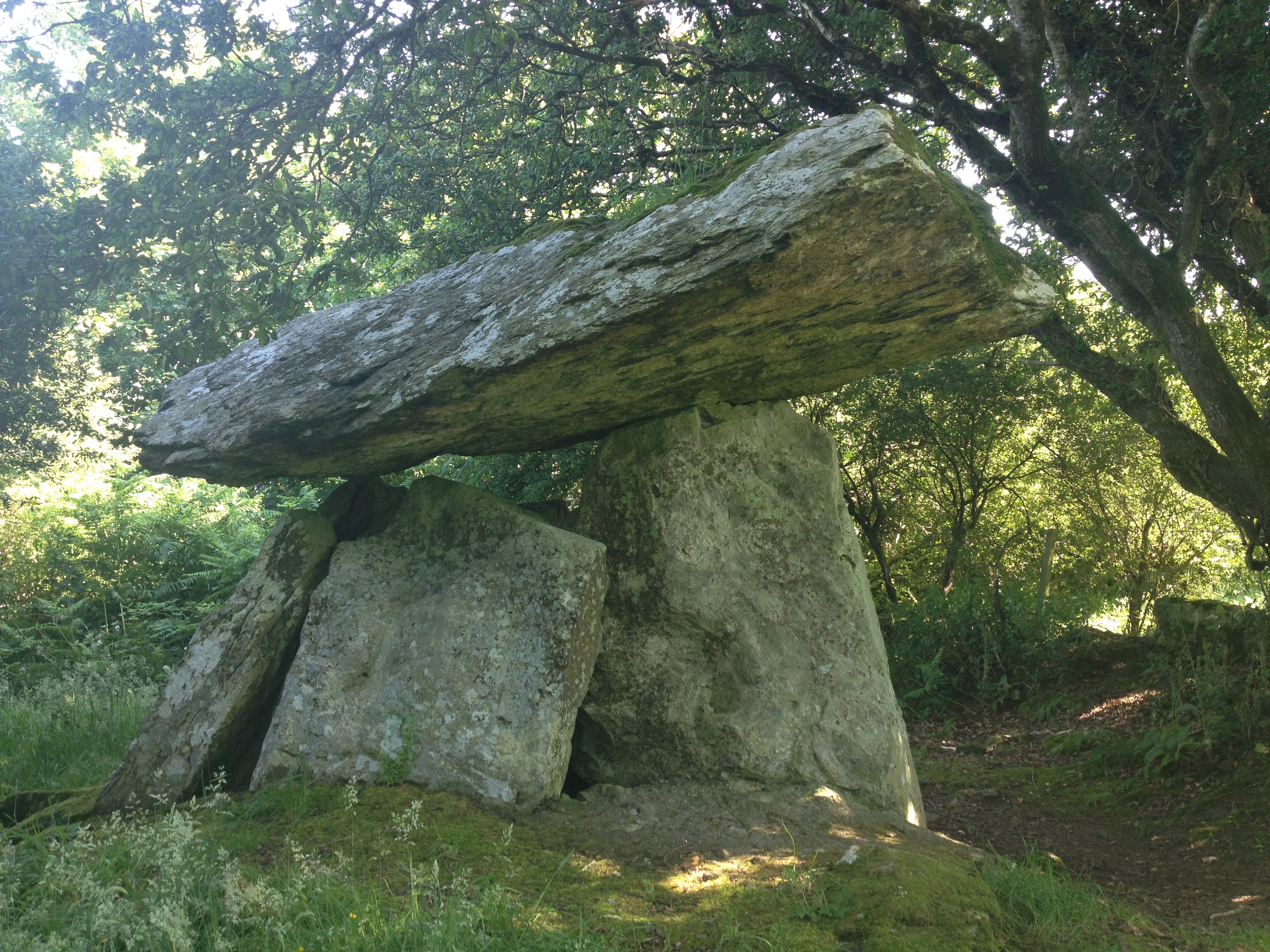 The rest of the wave unfolded.  Staccato started only after a long time in Flowing; and I returned many times to Flowing even after I had fully entered Staccato.  Staccato was not very energetic until Chaos began to appear, then the last burst of Staccato was very vigorous.  I covered vast ground, moving far beyond the little circle I had drawn in the sand at the beginning of Flowing, all the while taking in the landscape even as it flashed across my field of vision in Chaos.  In Lyrical I again played with my version of Irish step dancing. In Stillness I experimented with concentrating my energy field close to my body, then extending it far beyond my own edge.  I ended the wave with my feet firmly planted and wide apart, holding my hands together in front of my chest, standing still and facing the sea, sensing myself as a colossus—taller even than the high, green cliffs.

The next day was the final day that I was able to dance in Ireland during this trip.  As soon as I dropped Simon off at camp, I went to the secret beach, where it was again overcast and deserted. I spent some time creating an artwork, then drew a circle in the sand around myself and began to move in Flowing.

From the beginning, this wave was alive.  In Flowing, I moved with ease and freedom far beyond the outlines of my little circle.  The weather started to improve and a few people made their way down the cement stairs.  Shy about occupying so much territory, I moved back behind some boulders, though I was still partially in view.  Flowing shifted into Staccato and I covered even more distance, discarding my concerns.

I tracked the subtle shifts of energy, moving intuitively.  The wave followed this pattern, if I recall correctly:  Flowing, Staccato, Flowing, Staccato/Chaos, Staccato, Flowing, Flowing Chaos, Chaos, Flowing, Lyrical, Chaos, Lyrical, Chaos, Flowing, Flowing Lyrical, Stillness.  I let everything in, deeply sensing the enormity and vast power of this incredible place.  I went into Lyrical two or three times inside of Chaos, rising up onto my toes.  In Stillness, I returned again to the original circle I had drawn in the sand.  I invoked deities, helpers and guides, including Gabrielle Roth—the creator of the 5Rhythms practice—asking for help on my path, a clean heart, and the courage and insight to live my life in service to love.

I picked Simon up from the little, rural camp a little early since it was his last day.  The camp included only children from the small, local villages; and most had multiple siblings.  I told Simon I was incredibly proud of him for having the courage to step in and find his place there.  As we moved toward the car, many of the children hung over the fence, waving, and calling out, “Bye, Simon!” The next day, we set out for home.