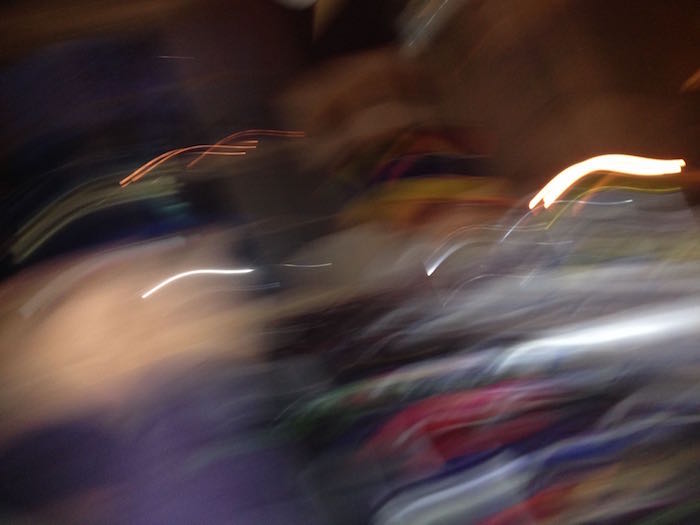 “Dancing Chaos is the survival art of our time.”  -Gabrielle Roth, creator of the 5Rhtythms dance and movement meditation practice.

“I know this is going to sound a little weird, but the Novocain will work better if you get up and move around a little,” said my dentist this morning as I faced the possibility of an emergency root canal—something I fear viscerally, despite my logical mind’s arguments.  I had been giving myself a pep talk.  “You are not going to die from this, Meg.  Pain is just a sensation.  It will pass.  Consider it a chance to practice.”

“No problem, I’m definitely a mover.”  I got out of the dentist’s chair and began to dance in the tiny office, noting that I was able to be very expressive, even in the small space filled with things I shouldn’t jostle or brush. My lower abdomen found a whole new way to open itself as I stepped diagonally forward and back—raising my arms—in the narrow space between the dentist’s chair and the counter, my feet finding rhythms and patterns, weighting back into the heel, bounding forward.  “Why didn’t I think of this before?” I wondered, moving into Chaos, letting my head release.  I took my seat again, feeling much more relaxed and properly numb.  I even had the thought, “These small challenges are an opportunity to build up my inner reserves for the much bigger challenges that will surely come; and I am grateful for it.”

Earlier in the week, at the beginning of the first wave of the Tuesday night High Vibrations Waves class at the Joffrey Ballet in the West Village, I found a quiet spot on the floor and entered Flowing slowly.  I crouched on my knees, bending forward and undulating, finding as much movement as possible in my spine.  Twice I rose to my feet, but returned to the ground again, not yet ready to be upright.

Visiting my family for Thanksgiving, I went for a run on Thanksgiving morning to visit one of my favorite places—a little network of trails along a river my grandfather loved to fish in.  On the way, I noted that I was actually feeling good.  Breath was available, nothing hurt, and I felt strong.  Then, I saw a political sign that brought me down—spray painted on a big, ratty, old board, proclaiming the residents’ allegiance.  Entering the river park, where I am usually alone, a plaid-shirted man wielded a leaf-blower, clearing fallen brown leaves from the entrance road.  I was annoyed at this destruction of my peace, and connected the man to the disturbing sign I had seen a few minutes earlier.  My mind revised its annoyance quickly, as I realized that the man couldn’t possibly be employed by the town and working on Thanksgiving morning.  I considered that he might be the caretaker of his own volition.  Running on soft ground through the woods and trails, a white sky inspired me; and a prayer of gratitude formed.

Back to the High Vibrations Waves class, Tammy Burstein, who was subbing for Jonathan Horan, dropped us abruptly into Staccato.  Unlike in my previous class when I resisted Staccato’s arrival, I stepped right into it.    Lately, I have been working deep in the belly, and deep in the feet.  I had a sense of fire in the belly; even holding the image of a warm sun behind the navel.

Tammy invited us to partner several times in the first wave.  After two or three partnerships, I joined with a man who I perceived as nonchalant.  I took on his oblique eye contact, his head slightly tucked into his shoulder, and played with my own perception.  Tammy asked if we were “pushing or pulling” and we began a very engaging dance of both pushing and pulling, deep in the hips and attentive to the ground.

The rhythm of Chaos had important insights for me, especially during this first wave.  Continuing the exercise begun in Staccato, Tammy invited us to partner with the person closest to us, telling us to change partners again and again with increasing speed.  At the end of the trajectory, she told us to just keep changing; and I continued to move around the room, pausing frequently to partner.  Chaos, for me, is the most internal rhythm, and the one I am least likely to partner in.  I often find a spot, not too far from Tammy and where there is a little pocket of space, where I can really let loose on my own.  I found my spot and moved with a very gentle, released Chaos, most engaged when the driving rhythm fell away and the music became tonal or harmonic, still deeply in Chaos.  As the music became more energetic, I began to move very quickly around the room.  I was superlatively fluid and softened.  It was crowded, but somehow I did not bump anyone at all.  Instead, my gestures were precise as I moved very close to the bodies around me. It helped that there were many long-practiced dancers, who tend to move with the energy of the group instead of staying anchored in one place, keeping the whole room alive.  The quality of awareness that I had at that moment also helped to protect me from causing harm, despite close proximity and speed.

It felt good to be in the collective field, very much in sync, and at the same time, very much on the high edge of Chaos—the rhythm of our time.  To some extent, the gem of personal achievement has lost its luster recently; and I find myself moving more than ever in the collective field.  The ability to actually move around inside of Chaos—conscious, aware and even with direction—are skills I hope to build on.  Also, the ability to give up territory and be flexible, even in the face of intensity, is a skill I will need in the months and years to come.   I see the need to practice Chaos now, perhaps more than ever.

Lyrical brought its own delights.  I crossed paths with a dancer who moved with sinewy resistance.  He kept locking into his back hip and knee, and curving up from there.  I played with his gestures, experimenting and appreciating the chance to expand my own range.  Before long, a dragon joined me, curling around me, nudging my sides to guide me forward, and overlapping me at times.  I again rushed through the room, curving wind, whipping, cascading down in the spaces between people’s legs, rising up into the spaces above us, fixing my gaze on a spot far off in the sky and racing toward it in a rolling turn, still not bumping or crowding anyone, somehow.  With a quality of fierce spaciousness, I did passing through practice, letting each person stream through me and streaming through them in turn.

I shared the blessing that had come to me in the woods with my family before Thanksgiving dinner.  One cousin—a no-longer-recovered-alcoholic—heckled me as I began to speak, but I moved forward gently, trusting the form that had arisen by the river.  I shared new research on the science of gratitude, that there is now empirical evidence that gratitude helps us to have more positive emotions, to express more kindness, and even to improve our immune systems.  “In this time of great challenge—both personal and collective.  I feel called on to work on the few things I can control—especially being grateful for the many blessings I have, and building up my relationships and communities.”  Next, I listed some things I am grateful for, including my brand new niece, my adored son, my young cousin, all of the family members present, the wonderful food, and the family members who are no longer with us who built up our traditions and bonds.  “And now the prayer,” I said, “Lord, Heavenly Father, the Christian God who has been so kind, and, too, any other Gods who are willing to help our cause, please help us at this time.  Open our hearts and help us so that even our painful current circumstances may serve to awaken us to our highest purpose.”  “To our highest purpose” I said very softly and slowly.

On Tuesday, having moved through the first wave, faithfully attending to each of the five rhythms—Flowing, Staccato, Chaos, Lyrical and Stillness—I moved into the Flowing phase of the second wave.  As I moved through the space in curving lines and circles, seeking the empty spaces, I noticed each person, saying internally, “I see you there, and I am grateful for it.”  Someone I think is totally full of shit stepped into my orbit, and I noticed my internal judgment.

Twice, I bumped into people.  The second time, I was greeting one friend with my eyes while moving in a different direction, where there was already another body.  Although it had felt so good to be part of the collective field within this big, roving Chaos, I realized that it was no longer available to me.  Maybe my mindfulness had diminished.  Often, we think of moving through the space rather than staying in one spot as skillful, but it seems I had taken it a little too far, perhaps I had even gotten attached to the idea of it.  I wasn’t mad at myself, but I got the message.  I found a spot on the floor, and explored moving there, partnering with the people close by or with those who happened to pass.

The rest of the wave unfolded in sequence.  In Staccato, I moved alone and with others with ferocity but without tension.  In Chaos, my energy dipped and I crossed paths with the man I had earlier read as nonchalant.  He carried me along, and I found inspiration, movement, and totally new forms.  We were wild, with dramatic extensions, expressing pattern after emerging pattern.  In Lyrical we continued to move together, athletic in flight.

Alone again, the bottoms of my feet whispered against the floor, my weight held on one foot as the toe of the other delicately etched written words, messages, and pleas into the worn surface, my feet never losing contact with the floor.  My hands curled softly—the thumbs touching the first fingers.  From the view above, the prayer read, “Help! Please help!  We need help here.  I need help.  Please help me to be of service. Please help us at this difficult time.”  I saw my tiny dance, one of billions on the green, curved earth; and the little square I danced on began to glow.  My arms extended, gently casting up in arcs as I spun, transmitting the prayer to the heavens, from feet to sky, in full view of the Gods.

“Well, it looks like you just need a filling, not a root canal,” my dentist said.  My arched back settled back onto the dentist’s chair.  One small crisis averted, I dig deep, releasing to ground even in the midst of Chaos, preparing for whatever comes.