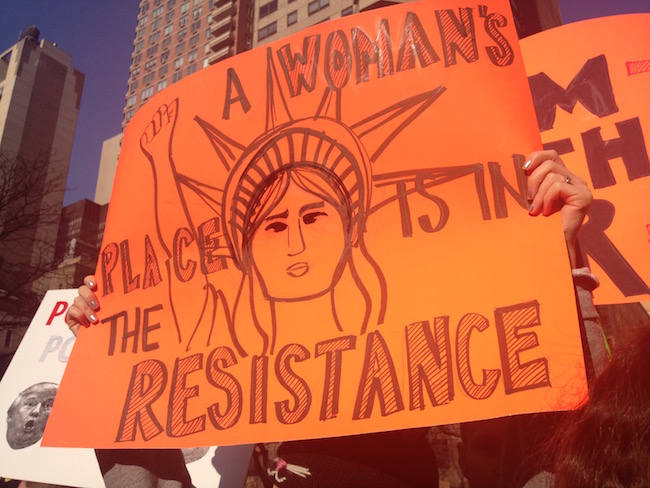 “There is only one of us here.” –Gabrielle Roth, creator of the 5Rhythms practice

Packed body-to-body with the many hundred thousand protesters who attended the Women’s March in NYC on Saturday, one friend led the way as we tried to squirm across 2nd Avenue to join our group on the other side.  When I reached behind me for my other friend’s hand, someone squeezed my hand enthusiastically and I turned around to meet the shining eyes of a stranger, who continued to hold my hand lovingly for several seconds.  This was the first time of many that I was moved to tears during the massively attended event.  Then I took my friend’s hand and, holding onto the friend who was leading, continued to make my way through the dense crowd.

I was reminded of how proud I am to be a New Yorker as I joined with my city, witnessing inspiring humanity all around me: the “Angry Grannies” group, the spectacular hand-made signs including the one with a Dr. Seuss-style poem lampooning the new president, the handsome Russian-speaking man who carried a sign that said, “I am you.  I fight for you,” the wearable sculpture with the raised-fist, black-power iconography of the Black Panther activists rendered in rainbow colors, the golden uterus hand tattoos of the Lady Parts Justice League, the signs reminding us of an American vision of social justice—though never perfectly manifested—an American vision every bit as real as the vision framed by the new administration.  Even our mayor joined the event, carrying his own sign of protest. 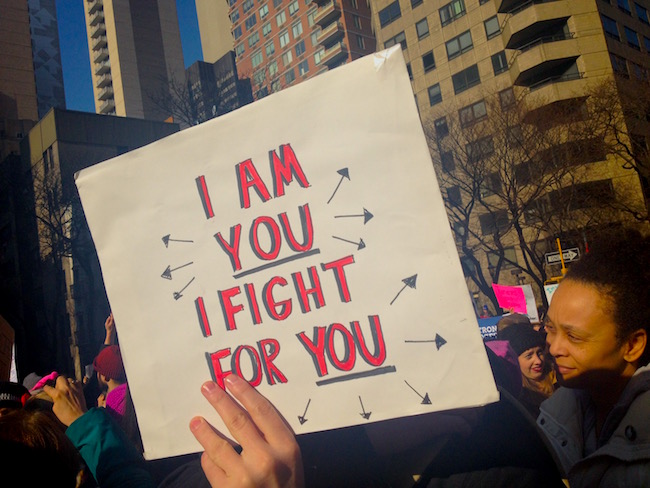 Peter Fodera led Tammy Burstein’s Friday Night Waves class this week.  I hadn’t realized that Tammy would be out of town, but sighed happily as I entered to see Peter at the teacher’s table.  Tammy once shared publicly that when she first met Peter, he seemed like such an angel that she almost didn’t believe he was human.  When The Moving Center organized a series of one-day workshops each on one of the 5Rhythms—Flowing, Staccato, Chaos, Lyrical and Stillness—Peter was, of course, called upon to teach the Flowing workshop.

Since the election, I have found comfort in the rhythm of Flowing.  It reminds me of my formative experience of perfect love—when my father would sing to me and rock me in a special rocking chair. On several occasions I have felt resistance when the music shifted from Flowing into the next rhythm, Staccato.  Analogously, during the week, I had trouble deciding which creative work to focus on, and what to do with my small ration of discretionary time.  I had been finding and embracing pockets of joy wherever I could since the election, but the actual inauguration was a sobering reality.  I listened to the new president’s speech in the car on the way to class and bellowed with grief.  I was happy to see Peter because I was sure he would guide us in the grounding energy of Flowing, where I would find comfort and belonging.

To my surprise, Peter kept us in Flowing for just a brief period without any real earthy snuggle, then, in what seemed like a short time, he began to shift us into Flowing Staccato and into Staccato.  I groaned inwardly as the music shifted.  The majority of this hour-and-a-half long wave was spent in Staccato and in Chaos.

That week, I had entered a deep investigation of some chronic tension in my right shoulder with my therapist.  Several images came up, including that the shoulder was a key player in how my body expresses fear and defensiveness.  I also noticed that my right side was much less alive than my left side, and that my right foot seemed remote.  My therapist said, “There was a different kind of movement today.  Often, you move kind of like water in a container, close to the core, but today, there was something about the way you integrated your arms and raised them up that felt more expansive.” 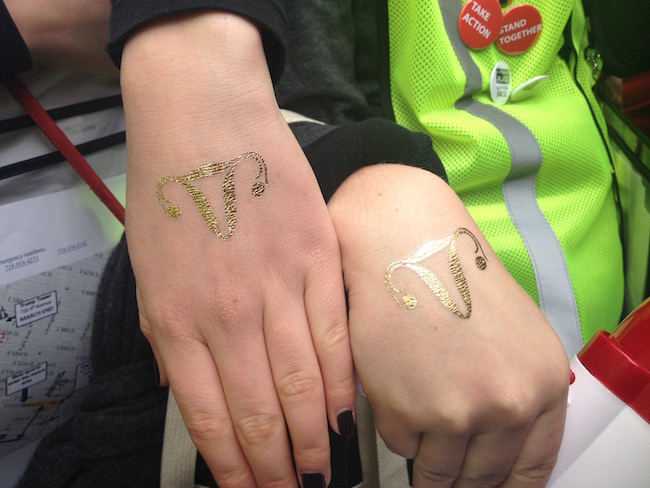 The first wave gave me many chances to use the dance floor as a laboratory for this new physical information about my shoulder.  I connected with a friend in Staccato who seems to be led by her shoulders, and I twisted and tumbled with her, letting my rolling shoulders pull me down and into motion.  I also enjoyed a gentle staccato turn with a tall friend who rolls easily out into his extremities and inspires me to do the same, still noticing the role of the shoulders in my gestures.  Next, I joined in an inspired Chaos with a friend of many years, remembering a time when the two of us let loose in the middle of a giant Chaos circle, amidst whoops and cheers.  More than once, I encountered a new dancer who easily matched my high energy level, bounding, up on our toes, and twisting backward into the hips as Lyrical delighted us into beaming connection, my arms rising up from underneath, the shoulders as released as they can be at this time.

At the end of the class, Peter brought spoke briefly. I left with the message of a strong call to action, though I can’t remember his exact words.  If even Peter, who seems to have an especially strong connection to Flowing, seemed to be urging us toward Staccato and toward action, well, I really have to take that in.  Maybe I need to stop wallowing in the harsh reality of circumstances and get on with it.  At some point, I have to pick a point to move toward, and commit myself to goals and the specific actions they require.

A close friend responded to my rhetorical question, “How to work with anger, and yet to act with love?”  She sent copious resources, and though I found the resources helpful, I realized that many of us have been training for years in preparation for this very moment.  I have a practice and a community that will carry me and that I have a responsibility to carry.  It is only when things get hard that the integrity of practice is truly tested.  Practice has become—now more than ever—an emotional, political, and spiritual imperative.

As we made our way to the march from the subway, I nudged my friends to notice an elder of advanced years, who sported a pink coat, the trademark pink pussycat hat, and a cane with a chair feature. I was moved by her participation, and, you will not be surprised to learn, found myself crying.  During the day, I saw many other elders, who could not have had an easy time of being on foot for many hours in the huge crowds.

Standing in the solid-packed crowd for hours before the start of the Women’s March, I was grateful for the teachings of Flowing.  Though I am just five feet tall and could not see beyond the bodies immediately thronging me, I felt fine about being so close.  I enjoyed breathing the people around me in, though it kept bringing me to tears, touched as I was by so many images, overheard comments, and exchanges. It was a powerful antidote to Friday’s speech, which made me feel afraid, sad and angry.

Saturday after the march I sat talking politics for hours with a friend whose political leanings tend toward anarchy, grateful for the opportunity to discuss politics in depth with someone I both agree and disagree with.  In her opinion, America has never been a functioning democracy.  I see her point, but I am an American, too.  My deeply committed, progressive parents who have worked for social justice causes throughout their lives are Americans, too.  The thousands and thousands of beautiful humans of all colors, orientations, nationalities and abilities who stepped into the march on Saturday are all Americans, too.  We are also America.  I don’t think it is fair to call America a completely failed project.

On Sunday morning, I attended the Sweat Your Prayers class at the Joffrey Ballet, where today’s teacher, Jilsarah Moscowitz, wove in similar themes.  As with Friday’s class, I was right on time, anticipating a long, patient Flowing.  After some exploratory strolling, I lay on my back on the floor where I continued to tune in to my right shoulder.  Before long, I moved into a curling matrix, pausing to arc from the side of my foot and up the rib cage into my extended arm, and to stretch in my hips, hamstrings, quadriceps, and in the fronts and backs of my shoulders.  Continuing to moving in a patient swirl on the ground, rising occasionally from the back of my hips with my hands and feet still down, I began to make my way through the space, still on the floor.  After a loop or more, I moved through the room on my feet, silently acknowledging every person in the space and saying internally, “I see you there; and I am grateful for it.”

Jilsarah gave us a tiny bit more time in Flowing than Peter had on Friday, but still moved us into Staccato much earlier than I wanted.  One low, slow staccato song inspired me and I danced deep into the hips, pressing my backside far behind me, my shoulders forward, feet dragging and rising.

Jilsarah narrated as Stillness of the first wave transitioned into Flowing of the second wave.  “Some say that we are in a time of Chaos.  Gabrielle Roth, the creator of the 5Rhythms practice, said that Chaos is a combination of both Flowing and Staccato — the combination of masculine and feminine energies.”  Although Gabrielle did not express this, Jilsarah indicated that we could experiment with Chaos as grounded action.  She invited us to “add breath” to the rhythms as a way to express the purity of each rhythm.  She said she hoped we might find a way to be both grounded—Flowing, and in action—Staccato, both on and off the dance floor.

In Chaos, I tipped sideways and lightly touched one of my favorite dance partners on the upper leg with the top of my foot, playfully inviting him to partner.  Our exchange was marked by dramatic cross-overs, weirdly-timed stops, collapses, flings, bursts, keeling spins, top rocking, and even by rollicking, back-and-forth running motions.  We laughed and laughed.

Lyrical was pure, weightless joy.  It continues to amaze me that Lyrical is available no matter what.  That deep acceptance is available even with the necessity for resistance.  The Dalai Lama, for example, is downright mirthful despite the many traumatic events he has experienced.  I moved in a flat plane, twittering up and sideways in my feet and hands, still opening the shoulders, letting air fill my underarms, flying, barely touching down.

I was at the march from 11am until about 4pm.  Though I had no phone reception during the event, I learned that almost everyone I know in NYC was in attendance, that my father attended the Women’s March in Hartford, Connecticut, and that my mother attended the march in Sacramento, California, where she was on a work trip.  The march went until at least 9pm, with fourteen city blocks packed solid with people called to action, streaming throughout the midtown Manhattan route for upwards of ten hours, with good humor, patience, righteous anger, and, too, with love—all the necessary ingredients for a true revolution, the one that must by necessity start from within, but must, by necessity, not stop there.