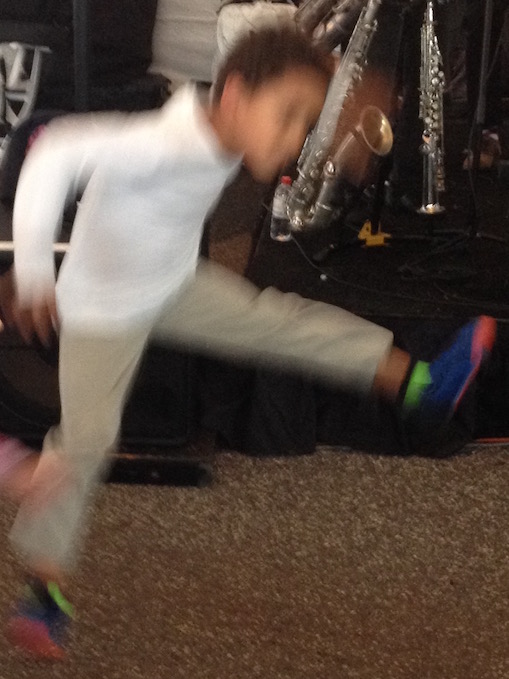 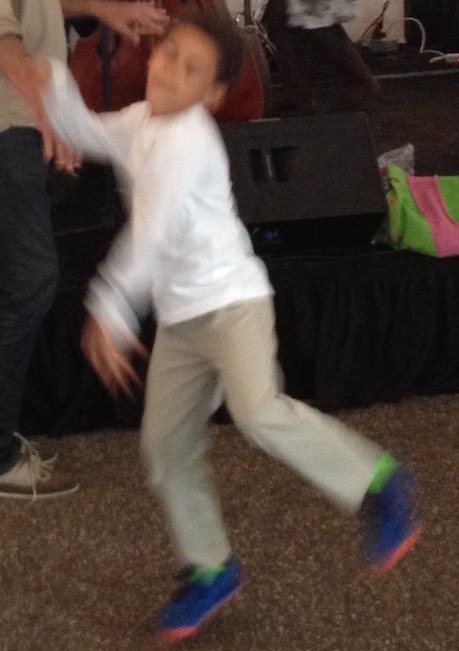 “I think we’re here to learn to be calm.  And gentle.  And also to be fast.  And to notice things.”

Have I mentioned recently that I adore my son?  Absolutely, totally and completely adore him.  Gabrielle Roth, the creator of the 5Rhythms practice, provided a model for me in this.  She adored her son, Jonathan Horan, too—unabashedly, wholeheartedly—and made it no secret.  Sometimes I think my own wounds might have kept me from fully embracing and displaying this love if it hadn’t been for Gabrielle’s powerful example.

This week, my son, Simon, turned seven.  We had a jam-packed, rollicking party with nearly seventy people in our apartment that included singing, dancing, playing music and rough housing—a chance to practice a manageable version of chaos in the face of the growing chaos of the national arena.  The day before his birthday, Simon called me back to the room after I put him to bed, crying.  “Mommy, I’m sad for you that I’m getting older and I’m not a baby now!”  “Oh, no!  Simon, I’m a little sad that you are not a baby anymore, but I’m even more happy and proud about the young man you are becoming!”

The times I have felt closest with Simon and most aware of the love I have for him have been inside 5Rhythms classes.  I started dancing two years before Simon was born; and I danced throughout pregnancy, right up until the very last week before giving birth.  A short time after he was born, he started to come to daytime 5Rhythms classes; and he has been attending classes periodically ever since.

Simon is too young to come to Tammy Burstein’s Friday Night Waves class (though he has been trying to convince me otherwise), but I thought of him during the class this week, especially since his birthday was just the day before.  In the first wave—what we call it when we move through each of the 5Rhythms in sequence: Flowing, Staccato, Chaos, Lyrical and Stillness—I entered the studio after Flowing was already transitioning to Staccato, but still felt I had enough of Flowing, somehow.  Though I have noted some reluctance toward Staccato recently, I entered into Staccato with ease.  Trying to work against my recent impulse to rush through Staccato straight into the next rhythm, Chaos, I lingered in Staccato.  In the process, I missed Chaos completely, waiting, as I was, for it to fully arrive.  I vowed to let loose in Chaos during the second wave if it was at all available to me.  At moments, I thought about the chaos of the country and how it might affect Simon’s life.

In the gap between the first and second waves of the class, Tammy offered spoken instructions as she moved through the different rhythms.  Her words caused me to reflect on what I consider to be “normal,” and how much my perspective on what is normal has shifted since November’s election.  Given that affronts to democracy have become frequent, frequency does not mean that these affronts are normal, by any means.  There is absolutely nothing normal about the current moment.

In the second wave, I made sure not to miss Chaos.  As Flowing began, Tammy encouraged us to turn in, and I had a flash of the starry cosmos inside as I lowered my eyelids.  Stepping in to Staccato, Chaos seemed to come quickly.  I shook, almost violently, rocking deep in the pelvis during the transition from Staccato to Chaos, then continuing to shake.  More than one rhythm operated on me at once.  I intersected with a friend briefly, and we were wild, creative, expansive.  We separated, then came back together again in Lyrical.  Lyrical kicked in like a switch had been hit, with a flick, and with a rush of delighted inbreath.  I noted the millisecond it arrived, thinking, “Lyrical!  Here it is!” We twittered and flew, but retained the ferocity of our earlier Chaos.

Next, I joined with a dancer I hadn’t ever seen before in an athletic Stillness.  We bounded and leapt, on and off the ground, in an attitude of breakdancing, sliding and twittering, pulling and gliding, pausing in curious, emphatic shapes the whole while, once with my cheek pressed to the floor, weight in my hands, and my legs twisted and raised, with tension in the balls of the feet.  I tossed myself under the bridge of his back, both of us laughing.  We disregarded Tammy’s instructions when she said, “Change” into the microphone, inviting us to take a new partner, but after the third “Change” we bowed melodramatically to each other and finally moved on.

I joined, once again, with my creative and expansive friend, both on our knees, our hands fluttering a gentle dance.

Simon and I had decided to attend the Sunday Sweat Your Prayers class the night before, and waded through the considerable rubble of Saturday’s birthday party, deciding to leave the bulk of the cleaning for later in the day so we would have enough time to get a snack before class.  He was short-tempered as we were preparing, and I told him, “That’s it!  You can’t use a screaming voice.  I don’t think we’re going to be able to go today.”  “No!  Please! Please, Mommy! Please! Please, I promise I won’t scream anymore!  Please take me to the class!”  I told him he would have one final chance and we set out.

We arrived at the Joffrey Ballet, where most 5Rhythms classes in NYC are held, with enough time to pay and get settled.  There was a line all the way up the stairs and out the door that seemed to be made up of ballerinas, based on the tights and smooth ballet hairstyles.  We learned that they were trying out for a professional ballet company as we threaded past them and into the crowded elevator.  In the elevator, people were generous with their attention, and Simon felt seen and welcomed.  The class’s producer, too, kindly welcomed Simon’s hug and kiss with open arms after we arrived on the 4th floor.

Simon and I have a ritual for entering a class, designed to help him understand and notice sacred space.  This was especially useful when he was smaller, to help him notice that once we enter, we don’t speak with words.  We stand in the threshold of the studio door, hold hands, take a big breath in, then, as we exhale, we jump into what we call “The Magic Dance Room.”

Once across the threshold, we found a spot, tucked into a comfortable corner near a pile of coats, and Simon got himself settled as I started to move around the room in Flowing.  He pretty much burned through all of his snacks during Flowing in the first wave, then got up in Staccato to join me on the dance floor.  He wanted me to hold both his hands, and he made this very clear when I tried to release one hand and extend my range of motion.  When he was tiny, he often wanted to be carried during a class.  If he was on the ground, he would wrap his arms around my leg.  I found a whole way of moving, even with one leg restricted, that I never would have otherwise uncovered.  In this case, I still moved very much in Staccato, though my dance remained attentive to his needs.  He trotted out some fancy footwork as we moved around the room, still holding tightly to my hands, and looking at all the dancers around us.  As Chaos arose, Simon went back to his spot in the corner and played with his Legos.  I moved around the room, then joined with a good friend in Lyrical, letting extensions pull me upward, and following her pendulous spinning.  The dancers close to us influenced the dance, too, as we found unending new forms.

In Stillness, Simon and I both stretched out on the floor and rolled, side by side, slowly into the middle of the room. Before long, I sat up and moved near him, but he remained on his back, pushing himself slowly through the room with his bent legs, gazing upward at the dancing adults.

At one point, someone triggered my anger.  I perseverated for a few short moments, then let it go, not wanting to taint the experience for myself or for Simon.

As the next wave started, Simon took another Legos break.  In Staccato, we danced near his spot.  For the first time, he let go of my hands and got creative with his feet as we moved toward Chaos, letting me loop around him and ranging over several feet.  As Chaos deepened, Simon went back to his spot in the corner again, while I moved into an exceptionally creative Chaos with one of my favorite dance partners.  We found new patterns, as one of us would express a sequence and the other would fall into it, each delighting in surprising the other with a new idea or expression.  The room was crowded, and our usually unbridled dance was softer (though still wild) and slotted in around the dancers close to us, but still taking up all the space we needed.

In Lyrical, Simon pointed to the door of the studio, and we both stepped out briefly.  “The music is too loud.  It’s hurting my ears,” he said.  “OK, we can stay out here for a little while.”  “We can go back in when the song is done,” he said, leading me back into the room as soon as the music shifted.

Coming back through the door into the studio, Stillness had already begun to unfold.  Simon poured his weight onto my forearm, as he does when we are walking home and he is extremely tired.  We were invited to partner, and to take turns telling the other, “Why are we here?”  We snuggled with his head on my shoulder and our arms wrapped around each other.  I said, “Do you want to talk about why you think we’re here?”  “I think we’re here to learn to be calm.  And gentle.  And also to be fast.  And to notice things,” he said, prompting me to kiss him on the forehead.  I took my own turn to speak, saying, “I think we’re here to make others happy and to make ourselves happy.”   We continued to snuggle and to rock back and forth gently.  At one point, I gathered him into my arms, sideways, like when he was a small baby, and rocked him gently.  As the final song began, Simon rested his head on the tops of my feet, leaning back, relaxed.  I felt a rush of love and gratitude, as we held hands and gently moved each other’s arms, listening to the last song Gabrielle Roth ever recorded.

When the music concluded, the mood in the room was reverent. Simon lead the way to our things.  We quietly picked them up, then headed out of the studio. I said, “Simon, I’m so proud of you.  When the teacher asked us to leave the room silently, you followed the directions.”  He said, “I didn’t even hear that, Mommy.  I just knew I was still in the Magic Dance Room and I couldn’t talk.”

We ended our adventure with a special lunch, and talked about our experiences.  Of everything that I do as a parent, I think that giving Simon access to the 5Rhythms is, quite possibly, my best offering.  Every phase of his development and of our ever-evolving relationship has been reflected in the 5Rhythms.  I am grateful for the many moments of glorious connection, when the practice draws back the veil of mundane experience, and reminds me of the divine blessing of my sweet little boy, my darling son.