A Range of Reds & The Death of a Spider 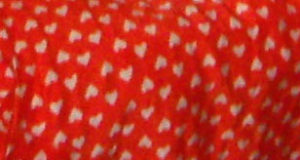 Daniela Peltekova, who moved from NYC to Los Angeles a year ago, taught the Sunday Sweat Your Prayers class at the Joffrey in the West Village today.  For her, a homecoming, for me, an occasion of unbridled joy and unflagging engagement.  I asked Henya, the class producer, “Daniela’s teaching today, right?” just as a friendly hand rubbed my back, which, it turned out, belonged to Daniela, who sort of waltzed into the studio wearing a long, red dress.

In part because I have been teaching mindfulness to teens, I have been reading “Mindfulness in Plain English” by Bhante Gunaratana.  He writes that although at a high degree of attainment, compassion will arise spontaneously, for most of us we need to enact some intermediary steps, when we consciously cultivate compassion to help us along.  He writes that resentment is by far our biggest relative impediment, and implies that we need to divest of resentment at all costs if we want to progress on our paths.

Stepping into the room, I move through a Tibetan practice, then offer, “May I be of service” and bow deeply, acknowledging the sacred space of the practice room.  I take a slow lap around the room’s perimeter, carving around the piano, pausing by the teacher’s table to share a softer and more flowing hug with Daniela, then continuing my lap, carving around the speakers, and around the occasional edge-hugging bodies who are warming up slowly on the floor. 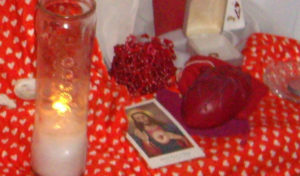 An installation has been created especially for the class.  It includes a table draped with several shades of red fabric ranging from tomato to almost-purple red.  There is also a large, red glass Buddha head, and several other sparkling red objects.  Shambhala teacher Irini Rockwell has written extensively on the idea of the Five Buddha Families, including the idea that we each tend more toward one of the five.  “Amitabha,” she writes, “the Buddha of the Padma family, is red and represents discriminating-awareness wisdom and its opposite, passion or grasping.”

A practice intention to rid myself of a difficult-to-extinguish thread of resentment began to form.

After my opening lap, I lowered myself to a spot on the floor to the left of Daniela’s table.   A tonal version of the mantra of the sort-of-Tibetan-deity, Tara, pulls me into coiling motion as I circulate, extending the side of my body, stretching my ribs, grabbing my toes as I rise and turn around, stretching the big muscles of my upper legs.  I sprawl out flat on the floor, both on my back and stomach as I continued to move through every spoke of a great wheel.

Not sure I was ready to let the ground be so far from my heart, I drew myself up to my feet with slight hesitation.  A woman who has triggered resentment for me over the last few years danced exuberantly, taking up space.  Resentment first snagged at a workshop, when the teacher invited us to partner and I joined with the man closest to me. We began to move together, but this woman very boldly stepped sideways right between us, facing him and casting her hand up, her back to me, seeming to totally disregard me.  I felt annoyed, but moved away and found a new partner, enjoying an overall delightful workshop.  In the years that have followed, though, whenever I see her, I remember that experience, and I just can’t be happy for her when she is exultant.  I rehearse what I want to tell her about how she wronged me.  I notice her in the room.  It is a perfect manifestation of resentment, that harms no one but me.  Intellectually, I know that resentment doesn’t give me more power, but some part of me still seems to believe that it does.

The wave carried me along delightfully, delivering perfect energy.  Moving with open, expressive hips and leading shoulders, I noticed the friend who had reminded me Daniela would be teaching this day.  She was beaming, casting her arms behind her as she leaned deep forward, her released head keeping the beat, deep in her hips, too.

As we moved from Staccato to Chaos, I shared several brief dances, thinking I would dance with the whole room, then unexpectedly found myself in partnership.  Another excellent friend, my favorite dance partner of all time, appeared as I was starting a swooping lap, and I leapt into movement with him.  We were wild as Daniela mixed a track with a house club anthem from the 1990’s that I love. We were also totally available to each others’ surprises, extending and falling, wiggling and rolling energetically on the ground.  He started to move around me in a circle, and I started to follow right behind him, laughing, changing direction abruptly to meet him face-to-face in his arc, then both of us spinning out, extending the space our dance took place in.  I felt incredibly stable on my legs and feet for some reason, and did a lot of experiments with raising, twisting and engaging my knees, sometimes on one leg for long stretches, reaching my fingertips to the ground, my knee and leg up.

Soon, I found another friend, and we shared a subtle dance in Lyrical, carefully carving the air around us and tracing designs on the linoleum floor with our toe tips. 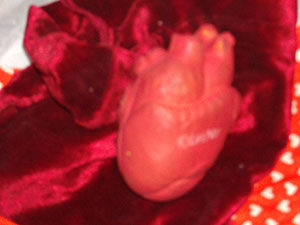 Instead of stopping everyone and sitting down between the first and second waves, as often happens in two-hour classes, Daniela kept us moving, speaking briefly as she moved among us, talking about “picking up the many pieces of ourselves” as we moved.  I didn’t know how to relate to a few of the tracks in this middle transition, and engagement flagged slightly, but very soon I was swept away again by the second wave.  I danced with the entire room, tunneling through avenues of legs, soaring and gliding into the spaces above and between.

The spider in my heart grew transparent, a white line drawing.  I directly invoked the spirits and asked for help, not for getting rid of the spider webs, but for help with eradicating the spider completely forever, asking for an end to resentment, letting the dissolve and then realizing it needed a more dramatic gesture, and envisioning it being blasted instead.

In Lyrical of the second wave, I joined with another good friend, released, joyful, creative, digging into tiny details on the ground, and alternately extended in flight.

A rain of gold leaves came down, landing on the upward planes of me, then entering and filling the volume of my body, cancelling out the spider.  I looked to their source and saw only vast, endless space and the glittering of falling blessings.

This blog consists of my own subjective experiences on the 5Rhythms® dancing path, and is not sanctioned by any 5Rhythms® organization or teacher. (Images copyright Meghan LeBorious, 2007)