In this time of worldwide fear and pain, practice is more important than ever. But what we usually do to practice the 5Rhythms is not safe at this time. So we are called on to be flexible, creative, and to test our ingenuity.

I admit that I miss dancing in big groups. I miss patient, belly-to-belly hugs on greeting. I miss the collective shifts of the crowd, like when a spontaneous chaos circle breaks out. I miss darting around into the empty spaces; I miss falling unexpectedly into partnership in perfect alignment; and I really, really miss dancing with my friends.

All of that said, I don’t think that practicing individually should only be considered as an austerity measure. In my experience, individual practice can also be a powerful teacher.

The first time I formally engaged in individual 5Rhythms practice was during a winter retreat at a Tibetan meditation center. I was seven months pregnant with my son, Simon, at the time. It was an eight-day retreat; and several powerful energetic teachings that are usually taught separately were taught consecutively.

It totally overloaded my circuits; and I took to the miles of rocky trails to process and integrate so much new energetic information at once. Flat wooden platforms used for tent camping during the warm seasons were interspersed throughout the woods; and I started using them as dance floors instead, throwing down my heavy coat as heat rose in my body and letting loose.

In Flowing one day, I danced on one of the platforms with one hand on a tall stick. I moved around it like it was an axis, dipping and spinning low, switching hands, curving my head, and threading my hips and spine around it.

Though I didn’t plan on it, before long, I decided to make practice formal, and I moved through all five rhythms in the woods at least once a day, often returning to the center windblown and red-cheeked, feeling like I had a glowing secret. One day, late afternoon sun blazed through the trees and through my body, dazzling in its intensity. On another day, I imagined that a pair of small dragons raced out of the woods to dance with me, both with a playful ardency, and with sinewy, powerful movements.

Like many, I’ve been practicing on my own a lot lately, as coronavirus locks down cities and countries. At this time, I’m very thankful for practice. It’s helped me to emotionally regulate, to integrate experiences, and to be connected to my communities.

There’s nothing like practicing in a room full of 5Rhythms dancers, where there are endless opportunities to explore relationship, and to see yourself as you are reflected in the people around you.

However, as rich as group practice is, there is also territory that can only be explored in individual practice.

Individual practice is also totally portable, free, and empowers you by allowing direct access to what we might call source–direct access to the depths of human experience–without the need for a teacher to act as a facilitator.

Gabrielle Roth, the creator of the 5Rhythms practice, conceived of the 5Rhythms as a way to relate to the creative process. She believed that rather than discovering or inventing something, she was creating a map for what was already inherent in human experience.

Working with a certified 5Rhythms teacher makes it easier to access deeper layers of reality, when we participate with full awareness in the dynamic, changing display of phenomena, but we actually have all the tools we need to connect with that same source even on our own, especially after we have already spent some time practicing in community.

Once, at my parents’ house when Simon was still an infant, nearly ten years ago, I was dancing a 5Rhythms wave with him in the living room. Within moments, I was filled with emotion. Though I had spent countless hours in the same room, dancing the rhythms there brought me to a layer underneath the mundane. It was like I was watching videos of infinite family moments inside the same room, where my own mother had been a child, and where I had been a child. I could sense and see my place in it, and see my son’s place in it, part of an unbroken line of human beings, the expression of countless acts of love and courage, and, too, of regret, grief, and unexpressed potential.

Creating some kind of an opening and closing ritual can support our practice, and provide cues to the unconscious that it is time to switch out of mundane gear. It can also be helpful to create some kind of visual or altar. One long-time dancer says, “My practice includes setting up at alter, which is usually a recent drawing. In the start of a practice, I think about all the giving beings I’ve ever danced with. I think about all the beautiful places I’ve danced. I try to do this at the start and end of every practice.”

Another dancer expressed that she finds it helpful to set an intention at the beginning of practice, and to return to that intention frequently, then to end with it.

During the summer of 2015, Simon and I traveled to Costa Rica. There, he went to camp during the days and I spent the time writing and dancing with the sea. 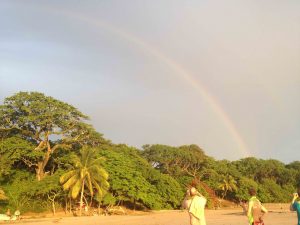 At first it was kind of boring.

I tried to seek out or set up informal dances with others, but it didn’t work out.

For the first few days, my dances were uninspired. I remained committed, though, and continued to spend the days dancing and writing. I began to go to a beach called Playa Pelada every day. It was remote enough that few people walked all the way there, but not so remote that getting there was impossible.

I sent some writing to one of the leaders of 5Rhythms, with the disclaimer,

“I know it’s not 5Rhythms practice if it isn’t led by a 5Rhythms teacher, but…”

She wrote back, “Actually, it can still be practice. It’s just that it’s individual practice.”

This validation helped me to believe in what was already unfolding, and I committed myself even more resolutely to practice–at minimum, to move through each of the 5Rhythms in sequence daily.

That brings up another benefit to individual practice–that it allows us to practice daily, even when schedule, geographic location, or, a worldwide health emergency make it impossible to get to a 5Rhythms class.

During low tide at Playa Pelada, warm tidal pools formed and I explored every crevice of the land, often moving in Flowing for long periods, and moving back into Flowing again and again, even as the other rhythms presented.

The first time that I danced the transition from low tide to high tide, I was cured of the problem of boredom.

Playa Pelada gave me so much to work with. There was a small island directly in front of the beach, and at high tide, the wild sea would rush around it on both sides, then meet in the center in a crashing tangle of waves. Shifting sand, rocks and debris would crash at my ankles and radically shift the very ground under me. I never tired of responding, arching, casting, turning over, flapping up fast, letting my hips recede as the waves pulled me, and coasting in circle after circle after circle.

Sopilote vultures arced and soared above the high cliff walls. Clouds shifted and raced. Rainbows appeared and dissolved. Iguanas, hermit crabs, and alligator-like caymen flashed in glimpses. Huge driftwood trees disappeared overnight. The sea rushed in and receded. And I witnessed this rich display and moved with all of it, leaving nothing out.

During our last week in Costa Rica, I danced from one low tide until the next–nearly twelve hours of moving–beginning before dawn. As the sun rose over the island and lit the sky, I immersed myself in a spontaneous ritual, using salt dyed with rainbow colors to create a giant spiral on the sand. I danced from its edge, where I felt I was in the relative, everyday world, along the path to its center, where I imagined I was in absolute reality, a place where different dimensions intersect. I moved back and forth through this spiral throughout the early morning hours as the ocean began to gather into a crescendo and eventually erased the spiral, gathering it back into herself. 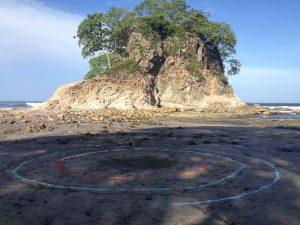 Practicing individually in beautiful, powerful places has expanded the possibilities in my own dance. I carry these experiences in my body, even when I enter back into dancing indoors in community. For example, dancing with a powerful river, I visited its deep, cold, dense, black river bed. Now, in Stillness, I can still connect with this experience and remind myself of my own depths, the dark, cool currents that run deep inside me. 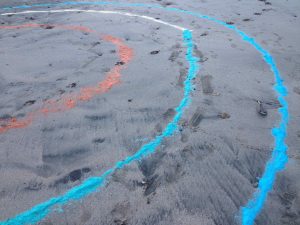 The year after Simon and I were in Costa Rica, we spent summer on the southeastern coast of Ireland. There again, Simon attended camp and I spent the days dancing with the sea, writing and making artwork.

The sea was indescribable. Gigantic. The tide goes out nearly a mile, then rushes back in at high tide to pummel everything in sight. 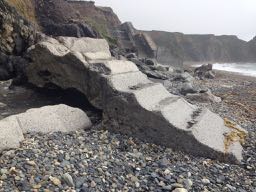 Slowly, as I danced with integrity over many sessions, this powerful place revealed itself to me, initiating me to its secrets.

In general, I have often felt that I needed to keep myself in Flowing longer than felt intuitive. This was so I could be responsible and find the ground beneath me before taking on any other investigation, especially when dancing with other people.

In Ireland, I learned that another benefit of practicing independently is that I can work with the mercurial shifts of energy as they arise. Instead of holding myself in Flowing at the beginning, I noticed that even once I did move into Staccato, I moved back into Flowing many times. It wasn’t an all-or-nothing thing. Even in Chaos, I still found myself going back to Flowing.

This week, as coronavirus rolls in crushing waves over the world, like many, I’ve been practicing independently in my own home. I would prefer for Simon and I to be fully quarantined, both to keep us safe and to not proliferate germs, but we have roommates who are still going in and out, so my obsessive cleaning and containment procedures might be for naught.

Yesterday, I danced a five-song wave, one song for each rhythm. It all seemed very mundane at first, with afternoon sun coming in the window and falling in angled squares on my worn living room rug and the cat sitting next to me on a rumpled couch blanket. But soon, it tore itself from my throat and broke open. I spun and angled and dipped in Flowing, letting in fear. In Staccato, I was fierce, expressive, decisive. In Chaos, I was gigantic, kinetic, powerful. In Lyrical, I expanded beyond my small conception of who I am. In Stillness, I offered the merit of my practice to my family and my friends all over the world, and the afternoon living room seemed crowded with spirit guides, ancestors, and deities.

This territory is totally uncharted and the stakes are high.

For 5Rhythms practitioners and to everyone who has a committed practice, now is the time to lean into it.

Early in New York’s wave, I noticed I was trying to bear down hard until the crisis passed. But soon realized that coronavirus might last for an extended period, and that bearing down and wishing time away will only cause me to wish away moments of this precious life, and to close ourselves down emotionally and energetically. Somehow I have to come to terms with it. Better to open to what is, even when it is uncertain, even when we are met with grave hardship, and even when we are forced to stand face-to-face with our deepest, most terrifying fears.