Practice in the Time of Coronavirus: Concluding Self Isolation

I’m listening to a livestream piano concert now given by a teen named Donny, who is the nephew of a friend. She shared that he has blastoma and autism, and just lost his mother. As I join the stream, Donny opens with three of my lounge-singer-grandmother’s favorite songs: Smoke Gets in Your Eyes, Misty, and Unforgettable.

I’ve been crying intermittently all day.

After 14 days of strict quarantine, my ten-year-old son, Simon, and I were able to join the household of my parents, in their house in Northern Connecticut yesterday.

Now Donny is playing Somewhere Over the Rainbow. He’s not reading any sheet music, and he’s really good and really into it. He mentions playing something “just like mom used to play it” and a male voice off the screen says, “You played that song at her service.”

Yesterday, Simon was very excited, got up super early, and raced to my parents’ room to climb into their bed and hug them. We had planned a whole coming out party, with dance and singing.

But this morning, Simon and I struggled. He seemed resistant to everything and uncooperative. He didn’t want to sing, dance, or help his Nana make a giant chalk drawing in the street to express thanks to health care workers.

Simon’s father, who was officially my partner for eight years, and has been my not-husband and close friend for another ten, decided to stay in Brooklyn, rather than come to stay at an apartment nearby we were able to arrange for him.

Every time Donny finishes a song, the off-camera person (his father?) claps enthusiastically.

I took a break from parent-child volatility to dance the Sunday Sweat Your Prayers 5Rhythms dance class at 11AM, happy to connect with community. Before joining, I took an emotional call from a family member I’ve been worried about.

I started late because of the call and caught only the tail end of the rhythm of Flowing. Today I cried hard as soon as I started to move, especially during a song with lyrics about loss. Lately, I’ve been recording myself when dancing for my own interest; and on the video my feet seemed a little hesitant in this beginning part. In Staccato, I had no trouble finding expression and inspiration, but with so much yoga and dance lately, my knees are a little tender, and it’s like I was trying to avoid stomping, a tiny bit aversive. In Chaos, I moved quickly, coiling and shaking. In Lyrical, my hands seemed to take over, but my arms didn’t seem to be fully extending. Overall, I was kind of flat today, compared to my usual athleticism.

Near the end of the Sweat Your Prayers class, Simon’s came in and said, “Mom! Get. Me. Socks!” Another period of challenging exchanges was set off. 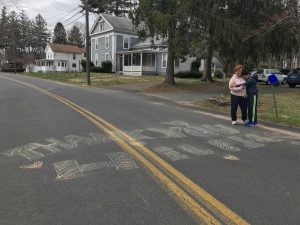 While I was dancing, my Mom created a giant chalk drawing across the street that says, “Thank you, helpers!” She tried to engage Simon, but he was resistant. Challenging because the reason she designed the project was specifically to engage Simon. A motorcyclist went out of his way to avoid damaging her cheerful drawing. Another passing driver beeped and waved, smiling.

Everyone in the house seemed to be having a hard time.

Now? When we’re faced with so much danger, so much uncertainty? How can we be anything but overjoyed to be together? Unceasingly loving and kind? I know connecting with the people we love is the top priority now, and felt dismayed that it wasn’t going well.

Eventually this wave of unrest managed to work its way through, and we agreed to sing a few karaoke songs together.

Singing is very emotional for me. My Dad loves to sing, and we’ve been singing together like this for my entire adult life. It’s easier for me to sing with him because I can follow him. On my own, it’s much harder to carry the tune. When we sing, I feel the mixed happiness of being together in joy, and pain of knowing how much this will hurt if there is a time I don’t have him any more. Also, my Dad is the most tender-hearted person I know, and it comes through in his singing voice. 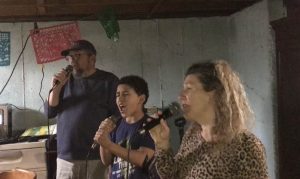 All four of us were smiling and dancing. Simon, though still young, is a trained musician with a strong, clear voice, and belts out a few of his favorite songs. I put on a hot pink tutu that I found near the karaoke studio in the basement. I was having a little trouble because sadness kept bubbling up; and it’s hard to control your voice when your heart wells up into your throat, but still sang with feeling. My Mom alternated between singing and dancing–at one point waltzing with Simon–and she took a video of Simon, my Dad, and me singing a melodramatic 80’s song.

My Dad had a heart attack two years ago, and was recently diagnosed with diabetes. My Mom and my Dad will both turn 70 this year. As we sing, I think again and again of how precious these moments are, and how grateful I am to have them.

Now my mom is sitting with me, watching and listening as Donny plays Ave Maria.

In Stillness of the 5Rhythms wave in the Sweat Your prayers class, I sink deeper inside myself, imaging that I’m channeling light, and sending it out one hand, around the entire world where it pours out white fire, then back into the other hand after a trip around the world. Soon, I imagine the entire world engulfed in purifying flame, flickering with spirit fire.

Donny ends with Danny Boy, a song my both my grandmother and my great grandmother loved, and we are in tears, sobbing along to the lyrics.

At the end of the concert, Donny walks toward the camera and takes a formal bow, then signs off.

I didn’t want surprises tomorrow morning right before I have to work, so I checked my work email right before posting this. I learned that another student I’m close with has lost a family member.

My heart breaks. So many people are suffering now, most especially those who are vulnerable because of poverty.

For now, there is nothing to do but practice, and pray, and try our best to love the people who are close to us as skillfully as we are able.