Practice in the Time of Coronavirus: Uncertainty

I had just broken up with the love of my life. The first time we embraced, our heartbeats had shifted to match each other, beating in sync. This was the first of many times that we broke up before it would eventually stick. I had built a whole identity around being part of this relationship, then it caved in instantly. 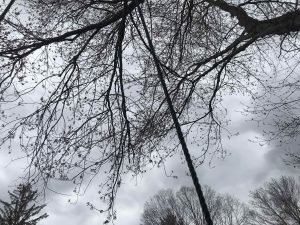 I called my sister, heartbroken, consumed, wanting to talk and talk, to be reassured, to believe it would all be ok, to stay on the line so I wouldn’t have to face the painful feelings, groundlessness, and uncertainty on my own.

Thankfully, a few months before, I had started intentionally studying the workings of my own mind.

My sister seemed exasperated, and suddenly I realized that escaping myself in times of uncertainty was no longer a pattern I wanted to continue.

I hung up the phone and stayed out of contact for several days. I was at the cheapest motel in South Beach, Miami. I scream-cried for two days, slamming my face into the pillows, probably frightening the neighbors, and occasionally pausing to cross the street for the beach and float in the ocean, a tiny being, bereft in the great mother sea.

For the first time since I could remember, I let the full force of my emotions in. It was agony, but it was also beautiful. Somehow, I knew I could face it, though I wasn’t yet sure if there was any way to get through it alive.

As the world grinds to a halt, time slows, and perspective shifts in favor of reflection, I’m forced to confront my patterns, the deeply rooted habits that have hummed along beneath the surface of me for years and years.

I’ve often made the resolution to participate in facebook more often, but have rarely kept it. In the last few weeks, as coronavirus has descended on the United States, I’ve been checking it a lot more, especially since I was in strict quarantine in Northern Connecticut with my ten-year-old son, Simon, for two weeks.

I’m a teacher, and when NYC Department of Education made a sudden pivot (from what now looks like a well-oiled machine) to remote learning to decrease the spread of the deadly coronavirus, I suddenly had to learn a whole new way of teaching for a group of teens who urgently need support and consistency at this time, a role that, sadly, despite my best efforts, I was unable to assume completely at that point.

At once, I was suddenly and without training in charge of Simon’s home schooling, which also meant learning a whole new set of skills and competencies.

I found that I was checking facebook at least once a day. I even started to feel sad that few friends had replied to one of my posts. “Can I get a little love?” I wrote, with a joking tone that was at once needy, stuck. In part, the solitude was getting to me. Also, something in me wanted the reassurance of knowing I was seen and approved of. As this habitual pattern arises, this need to seek reassurance in the face of uncertainty, I have the opportunity to work with it in a new way, to break the habits that keep me trapped in a small sense of self, and blind to my infinite power.

Instead, in the face of grave uncertainty, I think the best policy is to acknowledge and tolerate the discomfort that arises. Otherwise we engage the habitual patterns that we’ve ingrained to keep uncertainty at bay, and in the process re-enforce the small, limited box we’ve forced ourselves into.

That is to say, shit is painful right now. For a lot of us.

And we basically have two options. We can scramble and squirm and try to escape the pain and uncertainty of our situation, through mindless entertainment, overeating, overbusying, worrying, obsessing, complaining, and countless other activities. Or we can stop. We can pause. We can notice the uncertainty. We can feel it in the body as a sour stomach, a clenched jaw, raised shoulders, tightened belly, tensed hips, sweat, breath, heartbeat.

I’ve been practicing a lot, of necessity.

It seems like truth-guarding layers are peeling themselves away now. I think that if I continue to be diligent, this could be a unique opportunity to open more fully to reality, and to expand my human capacity.

Yesterday, I opened the window to the backyard at my parents’ house, where Simon and I are staying, and pointed the speaker out the window so I could hear the music and dance on the soft earth at the same time. 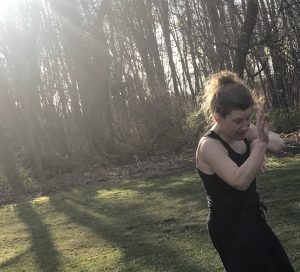 The yard is a mix of uneven dirt, new grass, and moss. I wasn’t sure if I would be inspired, but as soon as I stepped in to this unorthodox dancefloor, I was gathered into movement. In Flowing, I moved around and around, feeling the give of the dirt where underground moles have carved tunnels, the rise and fall of subtle inclines, the bumps and divets of the yard. I moved gently at first, trying to baby my knees, but as Staccato emerged, I lost my hesitation, moving with vigor and inspiration, at moments partnering with my own shadow in the late afternoon light.

In Chaos, I found a new way to shake–putting most of my weight on one foot and freeing the other side of the body, flapping the hip until the motion richocheted from my center to my edges and flung me into powerful motion.

Yesterday, I danced all day. I did yoga for a while, then danced part of a wave. I danced on zoom for a short time with a friend who, like many, is struggling with grief and rage. I went into the woods and danced a wave by a river that my grandfather loved, ending in Stillness with the currents of the river and the wind passing through me. At night, I danced as a participant in a zoom class that was facilitated by a senior 5Rhythms teacher.

I feel guilty for having afflictive emotions, when so many are facing the worst kinds of losses and I’ve been so lucky and so privileged. This is its own pattern, of course. The emotions knock at my front door regardless, and, though I squirm, I don’t go as far as barring them from entering.

One day this week, I felt left out, in a pervasive sense. I felt like no one was answering my emails or comments at work. And many of my friends outside of work seemed to be engaging seamlessly with each other, but I didn’t feel like I really knew how to be part of a digital group, how to participate in friendships this way. The isolation is getting to me. And recently I’ve noticed that I have some fear and resistance around group friendships.

Another pattern rearing up in the face of uncertainty.

In a moment of parent-child discord with Simon, I glanced over my shoulder out the window. A bluejay had landed on a small flowering tree in the yard. A white blob of birdshit escaped him and he moved on.

I turned my attention back to Simon as he resisted my efforts to get him into a creative activity, defaulting to a video game. I pushed harder, he resisted more. I pushed harder. He lashed out. I lashed back. He stormed off, then hid his face, waiting for me to find him, to apologize, to lure him back to good humor. I won’t say that I shortcircuited the pattern this time, but at least I saw it, this habit, yet another habit, that has emerged with extra force in the face of the current uncertainty. 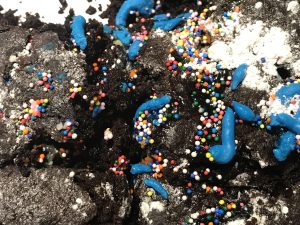 Today is my birthday. Still feeling left out, I (mostly) resisted the temptation to seek reassurance. Instead, I reached out to two friends and asked them to help me plan a zoom dance party and learn the sound tech needed to pull it off. They were incredibly generous, and a number of cherished friends joined. I felt loved and seen. Later, I hosted a family zoom dance party. Some had trouble with the technology, but many danced with good humor, including Simon. In this case, instead of asking to be reassured, I found a way to connect that would allow me to feel included. And I resolved to give more, even in group friendships, so I don’t set myself up to feel left out.

For weeks, I’ve more or less been thinking that if we just get through a certain period of time, there will be a point when things are ok again, are relatively safe, at least from the standpoint of germs. It’s only just now sinking in that there probably won’t be a clear moment, but rather it will be a jagged process that involves considerable risk. The president’s rhetoric concerns me immensely, and I’m afraid of another surge of cases if everyone is given a green light to continue business as usual. Even more uncertainty.

Today I reflected that practice itself can be a habit that interferes with practice.

Playing with Simon on a swing in the backyard, I noticed a tendency to think about what I would do after the swing session, ironically wishing to get back to practice. Then brought my attention to the texture of the swing, the movement of my body as I pushed Simon, Simon’s smile, the feeling of my voice vibrating in my throat, the soft ground, the wind rushing the just-budding branches.

I assigned an article on dealing with uncertainty to the high school students I teach. In it, the author argues that accepting the reality of uncertainty is essential for freeing our minds. She claims that when we are stuck on the impossible effort to establish certainty, our minds are fixed and rigid, but that “an uncertain mind is curious, interested, reflective and malleable.” (Headspace, 2015) From a practice perspective, I explained to them, uncertainty, though often painful, can also be seen as an advantage.

In practice, by staying present with what arises, we notice the patterns and habits that emerge when we are not present–our efforts to establish certainty. In 5Rhythms, we practice continually interrupting our patterns by moving in new ways: an in-the-moment laboratory for uncertainty studies.

In the words of Pema Chödron,“It’s not impermanence per se, or even knowing we’re going to die, that is the cause of our suffering.. Rather, it’s our resistance to the fundamental uncertainty of our situation. Our discomfort arises from all of our efforts to put ground under our feet, to realize our dream of constant okayness..But when we can completely let go and not struggle against it, when we can embrace the groundlessness of our situation and relax into its dynamic quality, that’s called enlightenment..freedom from struggling against the fundamental ambiguity of being human.” Living Beautifully with Uncertainty and Change