Like many, I’ve been preoccupied with the killing of George Floyd and the protests across the nation.

As throughout the pandemic, I continue to do the 5Rhythms dance and movement practice and to meditate, sometimes multiple times a day.

Yesterday, I had a video call with a group of students; and we discussed the unfolding events in Minneapolis. One student said, “It’s like it was me.” Several students agreed with her. We discussed how among the last words of George Floyd were “I can’t breathe,” and how symbolic that is. 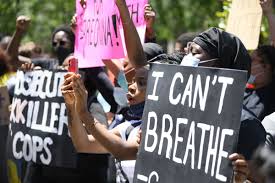 Today, I went for a run. My favorite place to run is in the woods along the Scantic River, near my parents’ house, where my ten-year-old son, Simon, and I are temporarily living.

I felt the hush of the shade canopy as I turned off the road, with the trees, plants, and animals moving fast toward the full expression of summer. The river was low and muddy; and beaches that are usually hidden by the water were revealed. I stretched through each stride, and ran fast enough for breath to be foregrounded in my awareness. I was alone in the woods, except for two white men I passed who were sort of leaning on a pickup truck, socializing.

I started looking for a good place to dance a wave, which is to move through each of the 5Rhythms–Flowing, Staccato, Chaos, Lyrical, and Stillness–in sequence. I noted a lovely river beach, revealed by the low water-line, in a grove bordered by gnarled roots.

I also noticed a path snaking along the water that I had never seen before, as it was concealed by the grass next to the main path, and most of the time is under the water level. I thought about how this moment has revealed things that are often hidden, the deep roots and vast reach of racism coming above the surface at this time.

I’m raised by deeply committed, practical activists who serve on multiple local councils and committees. I shared their belief in democracy, incrementalism, and Dr. Martin Luther King, Jr.’s idea “the arc of the moral universe is long, but it bends toward justice.” I wasn’t deluded about the continuing ravages of racism on American society, but I really believed that, little by little, things were improving.

That was, until Donald Trump was elected in 2016. Despite countless appalling and egregious abuses against people of color, women, immigrants, and differently-abled people in his personal history and during his campaign.

I started to come to terms with the fact that it wasn’t just despite these abuses, but in some cases because of these abuses that he was elected.

Don’t get me wrong. I love my country. This country is not solely defined by Donald Trump and the white nationalists he associates with. It is also my country, my progressive parents’ country, the country of countless activists, visionaries, and extraordinary children of color who are rising up into their own power as we speak, including the teens I teach, and my own ten-year-old child.

Back to my run in the woods, and my search for a good place to dance.

I love picking inspiring places to move, and this little beach was calling me. The only problem was that I was slightly visible through the trees to the two men by the pickup truck. I told myself they could barely see me, and that I could just stay a bit to the side.

Beginning to move in Flowing, I dared to take my shoes off. My feet released on the packed sand, but I remained wary. I stayed in the rhythm of Flowing for a long time, trying to settle in. Throughout, I remained preoccupied with the unfolding events in Minneapolis and other cities. Segments from news stories filtered through my mind. The president’s thinly veiled racist comments. The image of George Floyd, dying under a nonchallant officer’s foot. Activists, leaders, and commentators’ perspectives. 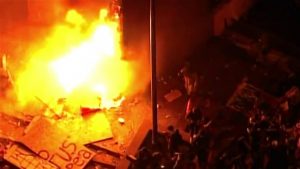 I understand the desire by black protestors to protest, and in some cases to riot, recalling the words of Dr. Martin Luther King, Jr. “A riot is the language of the unheard.” But another developing angle was that in Minneapolis reportedly a lot of the protesters who were looting and inciting riots were actually from out of town and were white supremacists.

My mind struggled to find a way to integrate all of this information.

I couldn’t fully gather myself, and I kept wondering about the men by the pickup truck. If they came after me, what would happen if I screamed? Would I be able to talk them out of an attack? I wondered if they were Trump supporters? And what if they thought this kind of dancing was weird and they wanted to attack me? I tried to talk myself out of it. Probably they were perfectly nice. This is a small town, they couldn’t risk raping or killing me because it would be easy to figure out who they are. I noticed the soles of my feet on the ground, I sunk my weight low, and I moved in arcing circles, but still fear kept sparking.

And I am a white woman, who benefits from the privilege of being white. I kept imagining what it might be like for a person of color, to bear this kind of fear and more, not knowing if you could trust someone by the river, perhaps always wondering if someone’s internal hatred would incite them to violence, perhaps always feeling, on some level, unsafe.

Maybe not for me? Maybe for me?

I thought then that it was crazy to be there without my shoes on. What if I had to run? I stopped the wave I was dancing and put my shoes back on. Quickly.

I moved down the river path, again connecting with Flowing, beginning with the feet, moving to the ankles, the knees, hips, spine, shoulders, elbows, and head. As I moved in this second round of Flowing, I mapped out an escape. I could wade across the shallow river, run through the trees and brush on the opposite bank, and tumble out onto the road if anyone tried to go after me, even if they threatened me with a gun.

I watched all of this. This explosion of fear. This developed escape plan. And part of me recognized that it is arising from my own psychology. And another part of me recognized that sometimes people do attack, sometimes fear is totally valid and necessary. Which is especially true if you are a black person in America. If you have watched people who look like you callously murdered. If someone in your family has been abused or killed by the police. My fear was real, and I kept empathizing with what a person of color might be feeling now, might feel at any time.

I moved into Staccato, still hyper-vigilant. At a certain point, I moved into a very energized state and started slaying invisible demons, but for most of the time, I stayed in a slow groove, trying to gather myself into some kind of storm, but unsure of how to direct myself.

Chaos was a nominal release.

In Stillness, I listened to the sounds of wind moving the leaves. Often, by this point dancing in the woods, I’m subsumed by the energetic world, but today I continued to be ready to run if necessary.

I sat down on the sand to meditate, allowing myself the space to sink in. I noted the many shifts of awareness, and that I kept coming back to the developing events in Minneapolis.

As a human being, I am heartbroken and concerned. As the parent of a child of color, I am enraged and afraid.

I offered a talk to my students about how proud I am of them for the work they have done around empathy, for being able to take different perspectives, and while I was dancing realized an error in my timing.

This is the not the time to praise people of color for developing empathy and awareness of interdependence, but a time for all people, including people like me who benefit from white privilege, to demand change in our structures, and for racism, and its roots in the belief that human beings are separate and distinct, rather than unfathomably connected, to be interrogated in every heart and mind, and exorcised from our structures and policies.

In the words of one of our many great civil rights leaders, Dr. Martin Luther King, Jr. during his last Sunday sermon at the National Cathedral just days before he was assassinated, “The time is always right to do right.”

(Photos from CNN.com and NBCNews.com)