I Won’t Die From Being Uncomfortable

I didn’t have language for this kind of experience until I saw a retrospective of the artwork of Adrian Piper at the New Museum in 2000. Piper is a Black artist who was often mistaken for a White person. She created small index-size cards that start with the text, “Dear Friend, I am black. I am sure you did not realize this when you made/laughed at/agreed with that racist remark…” She handed the cards out when White people mistook her for a White person and tried to team with her, setting Black people up as an “other” and making racist remarks. I love to picture her handing these out, for example on the subway.

Perhaps like this man, who seemed to be trying to connect with me for the simple reason that we were the only two White people on the train, perhaps trying to team with me to create an affinity that made him feel like he was separate, different from the rest of the train riders.

My core personal practice is the 5Rhythms dance and movement meditation. Normally, I dance in a 5Rhythms class once or twice a week and occasionally on my own, but since the start of the pandemic, I dance a 5Rhythms wave every day. To dance a wave is to move through each of the 5Rhythms–Flowing, Staccato, Chaos, Lyrical, and Stillness–in sequence.

Yesterday, I felt disheartened and lethargic. The coverage around the murder of George Floyd swirled around in my head 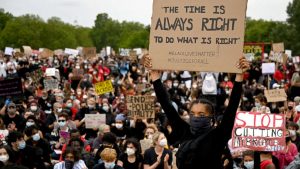 and I kept having ideas for things I should do, actions I should take. Memories, regrets, insights, and bits of speeches mixed in my head with the recent reporting.

I danced a lone 5Rhythms wave in the woods, on the bank of the Scantic River. I couldn’t get traction until I started to move with full attention to the breath in each rhythm.

In Flowing, I drew air in, emphasizing the inhalation, filling my lungs, letting in as much air as I could take, allowing my body to move in response, circling as the breath fell out. I didn’t think Staccato would be available, but after a time in Flowing I suddenly shifted attention to the outbreath, exhaling with force, pumping my belly, sinking into the knees, exploring the points of the elbows. In the rhythm of Chaos the breath got choppy, sometimes gasping, sometimes fast, sometimes with a forceful exhalation, sometimes briefly held, defying regularity. In Lyrical, the breath stayed just as unpredictable, but got much quieter and softer. In Stillness, the breath was elongated, and also seemed to be coming into and leaving the body through the pores.

Today, after a full day of working remotely and spending time outdoors with my ten-year-old son, Simon, I decided to set up speakers and dance a wave in the backyard of my parents’ house, where Simon and I are temporarily living.

Before I started, my mom took a picture of me taking a knee, a gesture inspired by NFL football player Colin Kaepernick’s controversial action of taking a knee before a game to acknowledge the continuing deaths of Black people at the hands of white police officers, and to express support for the Black Lives Matter movement. I planned to post the image in my school community. 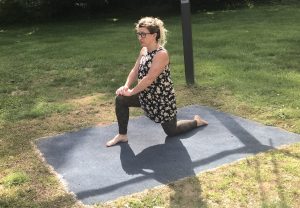 I remembered something that happened in a classroom several years ago. I was co-teaching with a Black Haitian-American woman; and the class was entirely composed of Black and Brown high school students. Something we read led a student to express anger about White people and their racist actions.

Looking back, it’s crazy that just one White person could have so much impact–a manifestation of White privilege. Back then I didn’t have that language, but I knew what was happening felt wrong, and that I didn’t deserve to have so much impact on the discussion. If I didn’t think to say what I said, I wonder how many voices would have been silenced? I wonder how many children of color in classrooms with White teachers do feel like they have to temper what they say, to hold back their opinion, to account for the sensitive teacher’s White fragility and inability to cope with discomfort? Thank God I had the insight and courage to speak this time. I wonder how many other times I haven’t even noticed?

So much of my practice and my training, both in meditation and in 5Rhythms, has been about building up tolerance to discomfort, being able to stay with what whatever is happening, rather than trying to escape it–in this case it would have been at the expense of discounting and silencing many young voices. It this willingness to be with reality that is needed now, even if it is uncomfortable or painful, as we interrogate the internal and external structures that sustain oppression.

I remembered another classroom incident, this one more recent. A student reacted to a phrase in Amy Tan’s “Joy Luck Club,” when Chinese American character Jing-Mei’s mother says, “You look like Negro Chinese.” Hearing the passage, the student raised his hand and said, “That seems kinda….racist.” My co-teacher minimized his feelings. “Oh, no, that’s not really racist, it’s just…”

I don’t even know if you would call this gaslighting because she seriously believed her position. To be fair, she is one of the most dedicated educators I know, and believes she has devoted her life to helping young people. And I guess it’s possible she was trying to protect the student from discomfort or pain. It’s also possible she wanted to avoid discomfort, or that she was just unable or unwilling to see it.

In contrast to yesterday’s wave, today’s was loud, energetic, and messy.

A blaring fire siren went off while I moved in Flowing, so I moved with its urgency along with the patient, circling track.

Today, I had less difficulty than yesterday with the rhythm of Staccato–for me the most variable of all the rhythms. I moved easily, gearing up with purpose. My feet were alive and expressing minute shifts of balance and force. My shoulders came alive and I expanded my zone, taking up more and more space, hopping, double hopping, sometimes adding a punctuated jump up. I was way in a cut, then suddenly the song tore me up and I was sobbing, snotting, thinking about the state of things, and praying to see reality clearly. Ideas for action kept jumping to mind. I needed several staccato tracks today, and went through a huge range of emotions, including anger and growling ferocity during one energetic song.

Chaos kept sneaking in all along, and when it finally broke out in full force, I flung my head around in weighted spinning, sinking low and keeping my arms alive and defiant. I cried more, grateful for the chance to discharge some of the powerful emotions coursing through me.

Lyrical started out extremely fast, at 173 beats a minute. I tried to dance to every single rhythm, melody, and sound, an impossible but engaging attempt.

I moved for some time to the currents in the air even after the music stopped, reverent.

As a White person, my role now is to be a ferocious advocate and a humble collaborator, in service to justice and dignity for all people, for my own child and for every mother’s child.

It’s the least I can do.

“My humanity is bound up in yours, for we can only be human together.” –Desmond Tutu