It is not the responsibility of any Black or Brown person to accept this apology, of course, but I offer it in case it somehow matters.

I remember a time, one of many, when I was taken apart in a conversation by a person of color. He challenged me to both act to end racism, and to be sure to act with precision and sensitivity.  He also challenged me to get past my own ego so I would be able to see more clearly.

On the note of letting go of ego—I thought about an incident that took place during a meditation retreat I was staffing several years ago.  We were sitting on meditation cushions in a group of ten, engaged in a formal discussion about aversion—the Buddhist concept of pushing away what is unpleasant or uncomfortable.

In response to a comment about the aversive energetic shell humans create to keep ourselves safe, I said, “Well, you know.  It would be one thing if creating a shell actually worked to make us happier or keep us safe. The thing is that it really doesn’t work. If it did I would be all for it, but it doesn’t.” I’m not exactly sure how it was framed, but I said something about, “It’s not like it’s the subway in the South Bronx at 2AM in the 1980’s, when you might actually need a shell around you.”

A flash of raw anger shot around the circle; and every single person felt it before even a word was said. One woman spoke up, expressing that what I said was racist.

Man, that hurt. Shame of the most intense possible quality flooded me. My heart started beating like crazy. My partner of many years at the time was a Black and Latino man. We had shared hundreds of hours in discussion about racism, ranging through many different levels. Secretly, I had always been terrified that on some deep level I was actually a racist. Though I was afraid, I approached the woman during the next break and asked her to talk with me about her feelings. She was receptive; and after, I understood how she could see my comment as racist.

This terribly painful experience gave me great insight; and a rush of relief flooded me with another set of powerful chemicals. I realized I had been afraid that there was some essential part of me that was racist. Every other *essentialist part of my psyche had been rigorously interrogated, but this part remained hidden, obscured by shame and fear. I realized that just as there is no essential self; too, there is no essential racism. As I currently understand it, racism is a process—a process that affects every single person who lives in this culture. Fundamentally, it is our flawed human tendency to separate the world into “us” and “them” that lays the foundation for racism, not an intrinsic hidden evil; though there is no denying the virulent intensity and complexity of racism as it now functions. 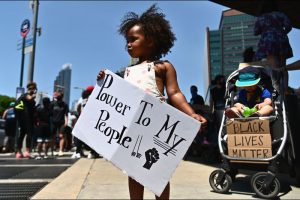 This understanding of racism as a process helps me to feel like improvement is possible. Rather than overcompensating to make up for my inner fear that I’m a racist, or getting defensive and unable to listen and learn, or stepping onto a liberal soapbox, I can then humbly recognize that I have a lot to learn and set about learning it.

It would be impossible to overstate the importance of these insights for my personal path; and I am deeply grateful to the woman who called me out. Even my firmly-held idea that I was a not-racist was limiting my perception of reality, and, as such, needed to be interrogated, as much as any other part of me, in the interest of uncovering the deepest truth and the cognitive biases that block me from seeing the truth.

From a practice perspective, so much of my training–both in meditation and in the 5Rhythms dance and movement meditation practice–has been about building up the capacity to stay with discomfort. Being able to stay with discomfort, rather than doing the infinite things we do to try to escape it, is a key skill for being able to encounter ourselves and others in a meaningful way, and to interrogating even the deeply guarded biases that keep us ignorant.

Being able to stay with discomfort also seems like a key skill in this moment of reckoning, of examining and challenging four centuries of racism and oppression in America.

On a different day, I might have found a way to rationalize or diminish my fellow participant’s outrage, but thankfully this time my practice training served me and I was able to stay with discomfort, in this case agonizing shame, to engage in a process of inquiry.

Moving forward, I am a committed White ally to Black and Brown people, and an activist for social justice. I acknowledge that in stepping up, I will sometimes misunderstand and get it wrong. I promise to listen with receptivity, especially when I have misunderstood and to do my best to repair any harms I cause. But I won’t let my fear of messing up or of seeming like a racist or of stepping on someone’s toes keep me from acting and from stepping up in the best way that I can.

I step up not as an authority whose opinion has special weight because of the color of my skin, but as a humble collaborator, to examine my own biases, and to partner in the critical work of dismantling the structures of oppression in our hearts, minds, institutions, and policies.

Our humanity is at stake now. It’s the least I can do.

*As you probably know, from the perspective of some Buddhist philosophy “essentialism” is the belief that there is a separate and definable “self” and too, implies that reality has some logical coherence or definability.