I lost my way into the writing for a moment.

I just didn’t know what to say. Or what I could say that would be relevant at this time. Just writing about my own personal practice seemed so self-centered, given all that’s going on in the world. And who am I to speak on matters of such grave import? Then again, who am I not to?

The only thing I’m an authority on is my own body–though even my body is riddled with the expectations and representations of the societies it exists in–and I hope this humble material can lead me to deeper wisdom, that extends beyond my own small experience. 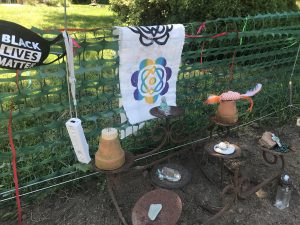 Nearly every day I bring the speakers outside and do the 5Rhythms dance and movement meditation practice on the grass in the backyard of my parents’ house, where my ten-year-old son, Simon and I are staying temporarily.

Most days I’m amazed that I can dance for over an hour, hard, totally on my own, and stay engaged, often joyful, sometimes fascinated, and sometimes even subsumed. Yesterday after a long wave, I lay down on my back and watched the few scant clouds move across the open sky.

In the morning, I was experiencing almost unbearable anxiety, to the point that I was pinched and dissociative. Whenever things are ok at work, I feel like I have it all figured out and it will be smooth from now on. But occasionally something will blindside me, as happened over the last few days.

I was managing the resulting feelings, but then I let myself drink too much wine, perhaps craving a break from anxiety, which put me over the edge the next day. I struggled to be present with Simon, and found it hard even to soften in a hug with him, which of course made me feel more anxiety, along with its near cousins: shame and guilt.

In the backyard, I stretched my legs briefly as Flowing music started. Then I replayed the same song when I got to my feet, calling my attention down, and bringing energy up from the ground. It took a lot of discipline and patience to even begin to settle in. By the second song, I was moving more freely and pulling in big lungfuls of air with each breath.

As the music moved into Staccato, I recalled a distant memory. It was very hot and part of my dance floor was in full sunlight, so I wore a baseball hat. When I first fell in love with dance, it was in underground clubs and parties in the 1990’s. The flashiest dancers in these venues were guys from the house music scene, with ultra-wide jeans and baseball caps; and this was where I cut my teeth.

I never wore a cap myself, but I picked up some of their gestures in mirroring and competing with them; and sometimes they rise up out of my body’s memory. I totally entertained myself with this, first playing directly with the cap, noting the gestures of my elbows, shoulders, hands and knees, the angularity that rose up, and the way of moving the diagonal planes of my body. Then I took the cap off and continued to play, watching my own shadow for information and entertainment. I thought about how I might teach this idea, or better, how I might use this idea as an example for how to tap into the body’s personal experiences as language for the narratives we create in moving.

The longest part of the wave was Staccato, and I settled in for a slow build on this hot, dry afternoon, visiting many of my favorite tracks, finding varied expression and enjoying increased flexibility and range of movement because of more time to stretch and do yoga lately. In one song, I lifted one leg up, open to the side, and experimented with spinning around like a young tap dancer I’d seen in a video. In another I turned my knees in, bouncing them together and raising my heels to the sides while I leaned forward and rocked my hooked elbows.

Chaos found me more tired than usual. Because of anxiety, I’d only slept a few hours the previous night and it was starting to catch up to me. I sunk low into my hips during a track that straddled Staccato and Chaos, whipping the spine from the hips through the crown of the head. Instead of expanding into the rest of the yard during Chaos, as often happens, I stayed relatively close to my little dance floor, a blue outdoor rug, but still allowed myself to move vigorously, releasing the head and trying to let go of the stories that were plaguing me.

In Lyrical, I moved with relief, grateful for release from the anxiety I started with.

New factors kept triggering anxiety, though. It wasn’t until today when I went for a run in the woods and danced by a river, with the first rain of two weeks blurring the edges of everything and falling in a soft hush, that I could see it as a gift–an opportunity to work with my patterns–even as the anxiety continued to spike with a rush of chemicals releasing in the diaphragm, then abating again.

I saw how I got tight and checked out when very difficult and painful feelings came up, not fully listening to Simon as he shared stories of his day, and unable to clean, organize, or communicate effectively. I saw how I hunched my shoulders, crinkled my forehead, and shortened my breath. I saw how I had used alcohol to help me escape, but only succeeded in making the feelings more painful.

I also saw how intensely I wanted the discomfort to end, but recognized that I could not avoid the process of reckoning that was unfolding, and determined to let it run its course. 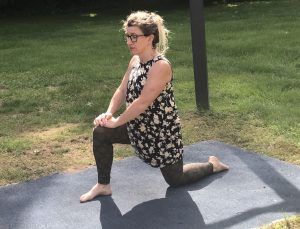 On days when I’m not dancing to music in the backyard, I’m dancing alone by the river, without music. Sometimes these waves are brief, as I often feel the pull of responsibilities at home.

Today, I moved on a patch of loose sand in the middle of the path by the river. A roof of leaves mostly sheltered me from the rain, but the drops that filtered through landed on my exposed face and arms. Concentric circles from the raindrops intersected on the surface of the river. Beginning to move in circling motion, the sand churned up under my feet. Again, it took me some time to settle into awareness of the feet. Stories kept sparking and often ran for many seconds before I directed attention back to the feet, circling, and breathing in.

Staccato broke through before I actually noticed it and I explored warrior cries, delivered at different volumes and heights. Chaos came and went many times, even twice dipping me back into Flowing. In its third peak, I danced some kind of demon, my vision totally blurred, and an ardent, warp-speed side-to-side stomping that I’ve never experienced before came through. Then I leaned forward and held my arms wide and straight out, bouncing from foot to foot, my head released, in a low, weighted spin.

Then my field of vision expanded beyond the small area I was focused in. “Yes,” I said quietly, noting the green light of far away trees, the moving river, the white sky. I continued to move, more quietly now, stories still occasionally sparking but less compelling, moving closer to the river and exploring different contours of the path.

Again, it amazes me that even without music, on most days I can dance for long stretches, essentially self-generating. That as much as I’ve loved dancing in big, sweaty, loud crowds, as much as I’ve hung on the words of cherished teachers, in the end, the practice can be stripped to its bones: that a secret to being fully alive is movement, that, as Gabrielle Roth, the founder of the 5Rhythms practice said, “A body in motion heals itself.”

Eventually, movement quieted further, and I decided to do another loop of the trail in walking meditation before running back home. As before, stories kept sparking, especially ideas for how to fix the situation that was causing anxiety. But I kept returning the attention to the feet, the sponginess of my sneakers, and the sticks, rocks, grass, and soft dirt under me, noting, too, as attention shifted, tension in my jaw, water droplets on the river, a tight shoulder, a bird on a nearby branch, and again and again, the stories that kept trying to hijack me.

I still don’t know what to say, or where to begin. But I think sometimes you just have to step in, and let the world lead you.