My right thigh resounds with little earthquakes, loosening tremors as I let my weight relax into a hard rubber ball. It’s been a long time since I remembered to roll out my muscles, and lately there have been many days hunched over a computer, working hard and fast.

I wake up long before sunrise so I can make sure to have time to meditate. I light a candle on my altar, wrap in a soft blanket, and try to be patient if my ten-year-old son, Simon, wakes up and wants to tell me about his dreams or a video game that’s on his mind.

Practice has had to find its way into the empty spaces. Some days instead of lunch I would put on music in the living room and dance a short wave. Some days I found a little time at night. For the last several weeks, I’ve dropped everything, rolled up the rug, and danced an independent wave from 3-4pm.

Since the beginning of the pandemic in March, I’ve danced alone every day, gone deep, and loved the opportunity to practice being self-generating. I’ve been able to attend a few outdoor, silent-disco-style classes with Henya Emmer and others, and have enjoyed the opportunity to be alone together. But since the start of the pandemic my practice has become daily, and most of the time it is me by myself.

I had a triggering weekend last week. It sat heavily on my shoulders, head, back. It was hard to get through the work day. The psychological brambles I’d stumbled into felt overwhelming and insurmountable.

It was almost 3:30 when I started, so I had just 30 minutes to work with before I had to go pick up Simon. I played a six song wave, with two songs for Flowing, and one song for every other rhythm. Emotion swelled, and I moved with sadness, anger, overwhelm, and confusion, often giving it voice. I skipped the entire middle part of the final song in Stillness because I feared being late to pick up Simon.

Even so, something shifted. The issues that were presenting didn’t feel as overwhelming or as tangled together. Everything felt much more workable. The anxiety I’d carried for two straight days dissipated. I wasn’t fancyfree, but I was no longer in agony. 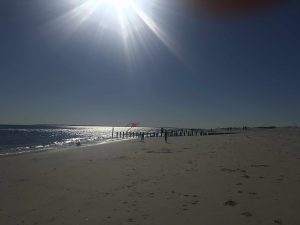 In September, one space that opened up unexpectedly was a work holiday for Yom Kippur. I assumed that Simon would also be off, but learned at the last minute that he did have school, so I headed to Jacob Riis park, a beautiful, wild beach where there are plenty of places to be alone.

After a short run along the shore, I drew myself a big circle on the packed sand close to the water and began to move in arcing spirals, taking care to churn the sand in every part of the circle.

Before long, I felt too confined, and moved beyond the circle I had created.

I stayed in Flowing for ages, wondering (as is often the case) if I would ever feel the calling to move into Staccato. It took me some time to let thinking recede and the body begin to settle. I told myself it was totally fine if all I wanted to do was stay in Flowing all day. Big, lowing sobs gathered and tore out of me, then faded away. And still I circled, feeling the sand give under my feet, and responding to the arriving waves and their tangled, pulling returns.

After nearly an hour, Staccato surprised me by igniting suddenly. A song I love to move to lately came to mind, and it was enough to get me started. Then the rest of me was tinder, and I moved energetically, playing with my own shadow, pulling taut and low, rocking my hips, advancing and receding from the sea, and exhaling sharply.

I was panting and beaming by the time I finally melted into a soft Chaos. My spine coiled and head rocked in gentle release, dipping down and casting up, spinning and flopping, my feet periodically submerged and splashing.

In Lyrical, I ranged over the wide beach and back to the water, even extending to soar over the dry, loose sand, delighted.

A soaring bird in the distance caught my eye, and I slipped into the rift of Stillness, moving with a silent mind. I waded into the sea, watching for a gap in the surf, then dove and did butterfly up and over the backs of the rising waves. Last, I floated, feeling the pull of complex, dynamic forces.

Schools are in chaos. There are COVID spikes in Brooklyn and many other places. The election is days away and the nation is holding its breath, many of us praying for a new vision and a peaceful transfer of power.