Freedom Is An Act

I was meditating when I heard horns honking and loud yelling. At first I thought it was teenagers playing around. But it wasn’t just coming from just one place, but from all over. 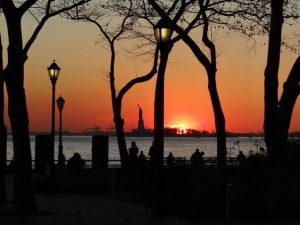 I picked up the phone and searched “election results 2020” and blinked. I had checked hundreds if not thousands of times between Tuesday and Saturday. On Tuesday, as results rolled in, my body grew tense, and I curled up into a ball on the couch, struggling even to respond to the questions of my ten-year-old son, Simon. Waking on Wednesday, I took a deep breath as I picked up the phone, terrified of a repeat of 2016 when I woke to a surprise election upset and a national nightmare for many, myself included. This time, votes in several key states were still being counted, and a nation bit its nails and tossed in its sleep for days.

But now Biden was finally over the needed 270 electoral votes to win the presidency! I ran to the living room, where Simon was playing a video game with his friend. “It’s over! Biden won! Biden is the next president!” Both kids jumped up and joined me in dancing and jumping around the room.

We set out shortly after to meet friends in Prospect Park. I stopped at a corner liquor store, “Do you have any champagne left in this place?” I joked. “It’s a good day today,” the shopkeeper answered, beaming.

We drove down Washington Avenue, beeping enthusiastically at every car and passerby. Every time someone beeped, a host of horns responded, and a cheer went up. I caught the eye of a woman at a stoplight in the opposite direction, and we both started beeping, cheering, smiling, giving the thumbs up sign, and bouncing up and down. Someone zoomed by on a bike, rattling a cow bell.

I kept thinking how powerful it was that Simon and his friend were experiencing all of this.

Traffic was heavy and there were street closures, but for once I didn’t care at all.

We found a parking spot near Grand Army Plaza. A band was playing and a huge crowd had assembled. We paused to dance before moving on to meet our friends in Prospect Park.

The main lawn in the center of Prospect Park was more crowded than I have ever seen it. The weather was warm and the sky was clear. People were dressed joyfully, some in glitter and bright colors. An Uncle Sam wandered by, and a Statue of Liberty. There were open champagne bottles on many picnic blankets.

We found our friends before long and immediately opened the champagne (and kid-friendly fake wine) and shared a toast. It was too crowded for soccer or other sports, but the kids began to rove and wrestle.

Joy swept the park in waves. A cheer would start and then swoop across the entire big lawn. When a new friend arrived I ran to them, threw my hands up into the air, yelled with joy, and in some cases threw pandemic-caution to the wind and hugged them. I kept filling people’s cups with champagne, and often it bubbled over the top of the small plastic cup.

Someone wheeled a speaker into the middle of the park and started a dance party. I moved toward it along with another parent friend, throwing my arms up and dropping my hips low. A small child started breakdancing, so we opened a dance circle in the middle of the action and clapped and cheered for him. I couldn’t resist, and jumped into the center after he got tired, taking the opportunity to express effusive, uncontainable joy. Others stepped in after, and I cheered and jumped and held space for each of them.

A Black man I’m very close with shared a glimmer of hope, then bitter disillusionment, believing that a new leader would likely mean more of the same broken promises and hollow politicking.

I watched the video of Black Emmy Award winner and CNN contributor Van Jones fighting back tears and speaking with heaving words, of how much this election means, of what it means for so many people. “Well it’s easier to be a parent today,” he sobbed. “It’s easier to be a Dad. It’s easier to tell your kids character matters,” he said, wiping tears with a tissue from under his glasses. “It’s vindication for a lot of people who have really suffered,” he managed to get out, with considerable pauses, attempting to control his powerful emotions.

The next day, Sunday, I danced again.

This time it was at Henya Emmer’s 5Rhythms dance and movement meditation class outside in Battery Park.

I arrived early, eager to move with new possibilities, and to release the toxins of four painful years.

I had attended Henya’s class in Battery Park three times already, so I knew exactly where to go, just to the East of Castle Clinton, and West of the Staten Island Ferry terminal. The site is a round, paved area in view of the harbor and Statue of Liberty, with trees curving overhead, and the tall buildings of lower Manhattan not far behind the trees.

As with the previous day, the weather was unseasonably warm and pleasant.

The class is silent-disco-style, which means each person wears a pair of headphones that pick up the teacher’s music and microphone. Before I even picked up headphones to tune into Henya’s music and teachings, I began a wild, joyful jig with a friend, to the music of some street performers who were installed nearby.

A friend I hadn’t seen since before the pandemic appeared. She had battled a serious illness but is now recovering. “Are you ok with a hug?” She asked and a sob ripped my throat as we embraced tightly.

Putting on the official headphones, I found Henya’s music subdued at first. I really wanted to let the bubbles overflow, and periodically removed the headphones to dance to the music of the street performers. I recognized the importance of slowing down and finding ground, though, and reflected that I was lucky I hadn’t hurt myself or anyone else, that for the last 24 hours I had been in Chaos-Lyrical without much sense of ground.

I continued to move in and out of dancing to the street performers’ music, and moving with the group.

I spent some time stretching, hesitant to put my hands on the ground in this era of Covid, but finally settling in, sinking low inside my hips and finding weighted balances as I moved my biggest muscles into stress to protect them from later injury.

I was a little concerned about my knees on the concrete surface, so moved beyond the edge of the circle to a soft gravel surface, where I could move with more abandon.

I went into the circle again, and joined with one friend who was visibly moved. We both vocalized, moving with grief, rage, and joy. I briefly wondered what it seemed like to Henya and passersby, but did my best to put it out of my head. In the past, I had been hesitant about vocally expressing the depth of emotions, but today that was not the case.

I thought about what it was like when President Obama was elected. When the streets in Brooklyn were streams of dancing bodies, when I cried for days. When we danced in a 5Rhythms class a few days after his election, the entire room was three feet from the ground. It was the most powerful collective joy I had ever experienced. I wasn’t even sure I could stay with it. It was almost too much for me.

This weekend had the same quality of shared, wild, uncaged, roving joy, of release, of relief, of surrender.

For now, though, I worked against my ebullience, and settled into the attenuated, low grooves that Henya served up. As she moved us through attention to various body parts, I lost self-awareness and time, sometimes nearly closing my eyes. A chemical release seemed to be taking place, filling my senses with an odd electrical feeling, and I just kept moving.

I spent the majority of the class on the soft, gravel surface, but moved repeatedly into the paved circle and the larger group, connecting joyfully with everyone who would meet my eye.

After this low, slow start, Henya shifted us gently into Staccato. I played with my knees, the weight of my shoulders and diagonally-arranged upper body, my elbows.

Many passersby stopped to watch or take pictures of the group, to the point that the street performers had to work hard to bring attention back to themselves. “It’s ok to show off your moves,” Henya said into the mic and into our headphones with a tone of humor. One dancer offered his headset to a woman who was sitting on a bench and she jumped in and threw down.

Staccato came and went for me between 2016-2020. It was incredibly variable. Today, I felt energized and competent. My little gravel patch made me very visible to onlookers, and it gave me just a tiny extra edge of energy and creativity. I ranged back and forth, side to side, finding many different ways to step on the beat, and using pauses and suspensions for maximum impact.

In Chaos, I went all out. I moved in a snarling matrix at times, at times moving with aerial changes, finding beat shifts with my knees, ankles, and feet in the air while soaring in an overarching, directional gesture. Sinking low, I took off the headset and flung my head–the end of a train that started with my coiling feet, sacrum, and spine.

Grief and joy ripped through my throat throughout the class, but especially in Lyrical. I left my little patch and joined the larger group. I danced with the recovering friend who I hadn’t seen since before the pandemic, then leaned toward her, pointed to myself, then to her, nodding, silently saying, “I follow you!” She understood and playfully led me throughout the dance floor. After a while, I pointed to me then to her, saying “You follow me!” and she knew exactly the game, her eyes glittering as she chased me around bodies, keeping her eyes on me as I dipped and turned, playfully eluding her then falling within her reach.

Henya played the Leonard Cohen’s gravelly version of Jeff Buckley’s “Hallelujah,” and many of us sang the Hallelujahs out loud. I moved through, feeling energetically porous, not separate from any other person.

Henya called our attention to the glowing Statue of Liberty across the harbor; and despite the sacred, tapered ending the music offered, we began to whoop, clap, and cheer–perhaps knowing that our freedom is both incomplete and is fragile, incomplete in that it does not yet apply equally to all, and fragile in that it is bolstered only by our collective beliefs and actions.

In the words of the late congressman and civil rights activist John Lewis, quoted by Vice President-elect Kamala Harris in her acceptance speech on Saturday night,