Today I danced a clean wave.

A wave – in the 5Rhythms dance and movement meditation practice, that’s when we move through each of the five rhythms: Flowing, Staccato, Chaos, Lyrical, and Stillness – might feel heavy, spastic, reluctant, spacious, inspired, cathartic, precise, or any other way. 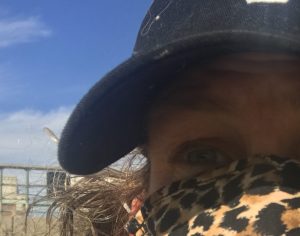 The heat stopped working in my car yesterday, and I debated if I wanted to go to the beach to dance – a personal practice that has emerged in recent months – in such frigid temperatures. I was afraid I would be uncomfortably cold when I arrived, cold on the beach, and cold when I got back into the car to drive home.

Since the start of the pandemic, many of us have gotten a lot heartier about cold. All over Brooklyn, friends are posted up dining at plein air restaurants, kids are playing outdoor soccer in January, and people are meeting up on park benches to laugh and commiserate together.

I put on my son Simon’s bib snowpants, a heavy coat, balaclava, winter hat, wool socks, and ski gloves and made my way.

Arriving at Riis Park Beach, the wind was strong at my back as I headed across the vast beach to the water. The tide was extremely low, and the water was unusually calm, with the waves moving almost parallel to the beach. I was delighted that this revealed a huge section of packed sand – a much larger dance floor than usual.

Beginning to move in Flowing, I noticed that it was easier than usual to let go of thoughts as they arose and drop my weight down, settling the body as the slope toward the water pulled me into circling. I felt dragged by the ending waves, as they too were pulled by gravity, and I dipped and curved with the waves’ contours. In my heavy coat, my arms looked stiff in the shadow cast on the sand, so I unzipped the coat and softened my shoulders, allowing the arms to rise, fall, and circle along with the rest of me.

Often when I dance with the sea, it takes a really long time for Staccato to spark, if it comes at all, but not so today. A staccato song I love came to my head and I played with the energy of it, though the only soundtrack was my own breath and the gently lapping waves. A seagull came close, standing on the strong wind with her wings up, probably hoping I would toss out some Taquis or french fries or something. Birds don’t usually bring Staccato to my mind, but this one was literally suspended in a pause ten feet from me, eying me directly, in my mind wanting to connect. I dropped into my hips and played with her, moving my own elbows and shoulder blades, open to her message, willing to share mine.

After this spike of Staccato, I sank back into Flowing again – the river under every rhythm – with a deeper ability to luxuriate in circling.

I took off the heavy coat and put it down on sand. The wind kicked it over, also picking up little rivers of sand, looking like the ancient spirits who were accidentally released in the 80’s adventure movie Raiders of the Lost Ark. 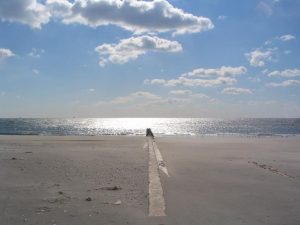 Before long Staccato came back and I beamed, playing with small, tight movements then bursting overtures, before long adding crossovers, stepping one leg back across the other and leaping into spin, crossing one arm over the other and finding a descending angle with a hip sharply to the side. As I turned the planes of my body, there was a precise fulcrum when the wind faced one side of me, then shifted onto the other side of me as I turned.

I noted a man walking two big furry dogs a short distance away, and a family with two kids on top of the sand hills that the beach rangers erect in winter to protect the park buildings from being battered.

This distant potential audience gave me a tiny push to get bigger, and I shifted into a relaxed Chaos. I expanded to a wider radius, noticing rolls of Lyrical, drops back into Staccato, and the easy, sustainable momentum of a patient Chaos that’s fueled by both the underground river of Flowing and the heat of Staccato.

Chaos with a flavor of Stillness visited, as I raised my eyes to the horizon and followed a soaring bird with my gaze and gesture.

By now I was sweating and breathing heavily, but there was no sense of exertion.

Lyrical emerged right on cue, taking me to an even wider radius, casting me down and up again. A tiny bird scurried by and I followed her, sinking low and shimmying my hips along the edge of the water, then leaping up into the fingertips and stretching my chest with each soaring opening of the arms, one at a time, then both, casting down and rising up, extending into the farthest reaches of me without dropping my weight, relying on a different kind of balance.

Stillness called me; and I felt the sea’s depths and the wide horizon. I closed my eyes and moved with wind and breath. I emerged on the other side of this wave feeling cleaned out, and ready for the next wave.

This blog consists of my own subjective experiences on the 5Rhythms  dancing path, and is not sanctioned by any 5Rhythms® organization or teacher.