I have the most mosquito bites I’ve ever had per square inch of skin. The most affected area is my left calf, but there are bites covering my entire body.

This year I’m spending the summer with my parents in Northern Connecticut, along with my 11-year-old son, Simon. In the past, I brought a heavy duty speaker and set it up under a shady maple tree to dance. A big patch of grass was worn away by mid-August last year and the dirt was dusty and hard packed.

On the days I didn’t dance in the yard, I would run to a place I love in the woods by the humble Scantic River and dance there instead.

This summer, I didn’t bring the heavy duty speaker, so my best option has been to dance in the woods.

The only problem is the mosquitos.

On Monday there were a lot of mosquitos. But Tuesday and Wednesday were ridiculous.

Turning down the road into the woods, gnats and mosquitos swarmed my face. Both days, I was happy to find my favorite spot available, and no one fishing anywhere nearby. Making sure I was alone, I created a circle on the sandy riverbank, asking all ancestors, deities, guides, and protectors to support me in my practice. The mosquitos smothered me as I moved through this ritual, landing on my arms and biting right through my leggings. At one point, I looked down and there were five mosquitos all attached to one leg.

I realized it was either leave the woods or surrender, so I stopped my wild swatting and said, “Ok, mosquitos, have at it! Feast on me for all you’re worth.” And I started to move in Flowing. I found that the more I moved the more I was able to discourage the mosquitos from landing, but they continued to bite as I turned my attention to the soles of the feet, noticing the pull of gravity and allowing it to draw me into circling.

Sustaining attention throughout an entire 5Rhythms wave for nearly an hour both days, I barely noticed the tiny parasites. 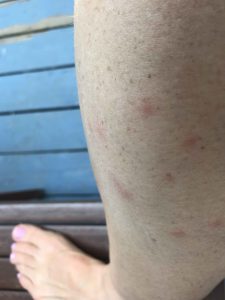 Later, scratching the many bites on my legs, I asked myself if this was really the best idea. It was a valuable experience to decide to re-cast something that was extremely unpleasant into something neutral, but I thought I might have to suspend the woods practice at least temporarily if the mosquitos kept up at this level.

I wasn’t feeling inspired about moving in any other spot, though.

So I decided to try a little harder to make it work. I laid leggings, a tank top, baseball hat, running shoes, and socks over a chair on the deck and sprayed them down with a highly concentrated Deet bug repellent. As soon as the Deet dried I put all of this on. Despite the over-100 soaring temperatures and high humidity, I also pulled on a pair of light, loose pants over the leggings, hoping to thwart the mosquitos who had bitten me right through the leggings on the previous two days. I tucked in the tank top and tied the pants at the waist. Finally, I sprayed my exposed skin with a citronella bug repellent, and sprayed my sneakers again for good measure.

I told Simon I would be back shortly and set out for the woods. Today, I once again found my favorite spot available. Again, I drew a circle in the sand of the riverbank and asked for support. The mosquitos were still thick but they didn’t seem to be swarming my head as much.

Since I’ve been training to become a 5Rhythms teacher, my practice takes one of two frames. Either I work with what’s inside and around me, allowing whatever needs to arise. Or I practice teaching, talking out loud and providing prompting to an imaginary class. Today, I taught to a class.

In practice, I never know what will arise. Today, I led my class into Flowing from the ground up, encouraging them to patiently enter the space, to connect with the floor, to consider helping me to move around the perimeter of the room, recognizing that space is sacred because we choose to define it as sacred.

A pickup truck drove by, rushing the road gravel not far from my sandy riverbank. I looked out the side of my eye, wishing for solitude and hoping they would leave quickly. I continued to move anyway, regardless of self consciousness and a slight flavor of fear. Thankfully, they pulled out again long before Staccato sparked.

Occasionally I said too much, diluting the power of my prompts, so I backed up and offered the same prompt again, aiming to be economical with words, to say just what was needed.

I led myself – I mean my imaginary class – through a gravitational version of the body parts meditation, moving with strong engagement. When Flowing was well established, and my feet felt soft and awake, I invited the class to breathe in and allow the elbows to feel the pull of the earth’s magnetic center, and to allow it to pull them into circles.

I invited them to meet a partner with their elbows as my breath grew sharp and I began to snap and cut the hips. Each partner took a turn to dance their heart, while the other partner witnessed. I kept bringing my gaze to a nearby tree stump – a sort of surrogate partner. “What if none of these gestures are arbitrary?” I offered. “What if this moment is your destiny? What would it mean to meet your destiny in this moment? What are you holding back right now? What more can you give right now?” This series of prompts hitched a sob in my throat, and I lowed slowly, feeling tears rise as I continued to move.

After meeting every partner in the space, we started to notice that holding all of those stories was too much. “You are not responsible for all of these stories,” I said. “You don’t have to hold them in your body. You can let them in completely and then let them all go.”

Chaos was vivid, emphatic. I found new patterns and new ways to disorganize my patterns. “Nothing to grasp toward, nothing to push away,” I intoned. “What are you holding back?” I said evenly as I hung my baseball hat on a cut off branch and released my head completely. “This moment is your destiny. There is nothing but this.”

Lyrical found me looping and extending, energetically porous, circling in an entirely different way. I led myself and the imaginary class through the portal of the body and into infinite space, sharing an ancient practice that was given to me by a sky goddess.

When the final gestures of Stillness concluded, it occurred to me that I’d been in the woods for a long time, and that I needed to get back and make sure Simon was ok. I again noticed the pesky mosquitos and the grueling heat, marveling that I hadn’t paid attention to either for at least an hour – and perhaps quite a lot more – as I had been absorbed in this beautiful practice.

I wondered what else in my life I can decide not to be irritated by, and what ways I can give more, what ways I can step up for the life that is right in front of me, the destiny that calls me to it and is only available right now – the rest is just holding back.

Meghan LeBorious is an artist, writer, and meditation teacher who lives in Brooklyn, New York. This blog consists of her own subjective experiences on the 5Rhythms® dancing path, and is not sanctioned by any 5Rhythms® organization or teacher. Photos are courtesy of the author.