It has been a wild ride lately. 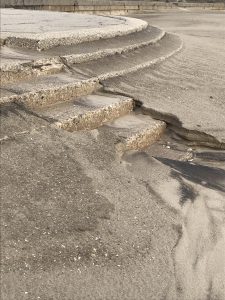 There are serious teacher and substitute teacher shortages at this time and as a result, many are carrying an almost-unsustainable work load. Also as result things have been chaotic, which has arisen to more fights than usual among the teens we teach. The principal was hurt breaking up a fight three weeks ago, and hasn’t been in the building since, though she has been trying to lead from afar.

On top of that, someone in my home building stole an amazon package, and a loud physical fight over a parking space erupted in the street in front of the building. The day before, a teen was hit by a car and thrown a huge distance. The driver left the scene while me and some other horrified neighbors tried to protect the severely injured child from traffic. We waited ten minutes or more for an ambulance.

I chose this place to be as close as possible to my son, Simon’s, middle school when we had to find a new place to live this past summer. I’m praying I made the right choice and that he can feel safe here. He keeps telling me he feels like he has to be “on high alert” though.

Today I had some time to myself; and I went straight to Riis Park beach.

Akin to the previous week, it was clear that the sea had surged over the boardwalk and all the way up to the bathroom area–a vast distance of beach swallowed up by high winds and high tides. Wet sand pooled in rivers and you could see dark and light sand patterns left by the receding waves.

It was not so cold that I needed snow pants, but cold enough that there were few beachgoers. I made my way along the boardwalk. The entire beach landscape was wet and smoothed down. Even the sand hills that are made in winter to protect the boardwalk from storm surges had been rounded and smoothed.

In the car on the way, I sobbed raggedly, thinking about the state of the world and how my personal experiences have intersected with it. I decided to dance with an intention today: physical and emotional safety for Simon, for friends and family, for the students I teach and members of my school community, and for all beings. 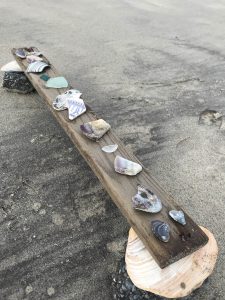 I found a driftwood board and made it into a small table with some rocks and shells. Then, I decided to search for objects to place on this altar that I would charge with protecting power, and give to some of the people I was hoping to send protection energy to.

We also got an email from Simon’s principal on Friday advising us that there had been a shooting on the corner right by his school in the middle of the afternoon. This is the first year he takes the bus alone, with only a peer and no adult supervision. He likes to stop for a snack at the deli on the way, and wasn’t happy when I told him he should go straight to school from the bus stop. 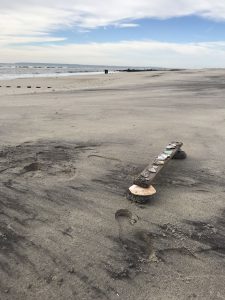 To give my attention something to hinge on, I decided to look for purple shells. It was low tide, and I spent some minutes searching for suitable objects among those embedded in the packed sand of low tide.

Last night when I was tucking Simon in, it occurred to me that the baseboard heaters get very hot, and it might not be a good idea for the bed and couch to be pushed right up against them. I consulted google and confirmed that bedding directly on the heater is not recommended. (Duh). I told him we needed to adjust and started moving things to make it safer. He was furious and screamed loudly that he was just trying to fall asleep.

My fingertips were cold and I wished I had thought to bring gloves. It was too cold for bare feet and I kept my shoes on as I started to move in Flowing.

Thankfully, I was quickly absorbed.

In part inspired by some somatic anatomy lessons led by 5Rhythms teacher Erik Iverson, I played with internal and external rotation in various body parts, moving from the feet, toes, arches, ankles, and heels on up through the rest of me. I spoke it aloud, teaching myself and also trying to be clear and concise as though I was leading a class.

Staccato felt like too much risk today. Every time I wondered about that, I just settled more into Flowing, feeling the need to settle my system and sink deeply into mindfulness of my feet–a core practice in the 5Rhythms system. At times I closed my eyes to allow me to turn further inside.

When I finally started to toggle quickly between internal and external rotation, especially in the shoulders and hips, Staccato started to emerge. I also began to play with pushing through the heels of my hands, then letting energy flow, and similarly pushing then releasing into the gestures of the heels of my feet. 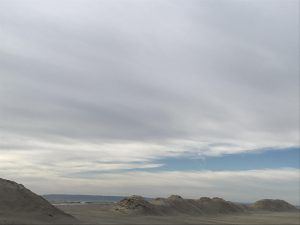 Finally warm enough, I took off my shoes and coat and let my feet touch the cold sand as I trailed them in lines and dug them in deep twisting circles. I turned away from the water and into the land, moving with my own shadow on the sand as I cut and dipped, pushed and released, clipping, sinking, rising up, pausing, then letting the gesture fly, sometimes with sharp vocalizations

I remained completely absorbed as I moved into the rhythm of Chaos and continued to prompt myself with various body parts, internal and external rotation, and pushing then releasing through the heels of my hands and feet.

In Lyrical, the pushing that was coming through the hands and feet opened up into full looping gestures. I imagined myself as the blue of the sky, with clouds passing through my torso.

In closing, as the sun climbed higher into the morning, I moved with the dark inside myself, feeling both density and weightlessness, imagining I had no references points and no cardinal directions.

I walked back along the boardwalk with still-bare feet, feeling quiet and calm, and cautiously ready for the coming week.

Meghan LeBorious is a writer, teacher, and meditation facilitator ​​who has been dancing the 5Rhythms since 2008 and is currently enrolled in the 5Rhythms teacher training. She was inspired to begin chronicling her experiences following her very first class; and she sees the writing process as an extension of practice—yet another way to be moved and transformed. This blog is not produced or sanctioned by the 5Rhythms organization. All photos are courtesy of the writer.