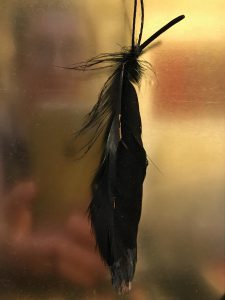 Ouch. Is a sore lower back a possible impact of Covid?

I’ve been in quarantine along with my 11-year-old son, Simon, after we tested positive for Covid. We missed family Christmas, but have had relatively mild cases and have been making the best of it. I’ve made serious progress on my to-do list and have had more time to write, think, and practice. My not-husband and I are taking turns making dinner, and in the evenings we watch a movie or play a board game. 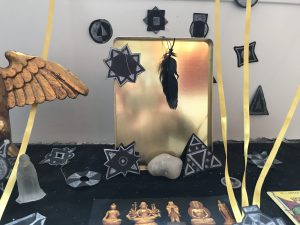 Between working on the computer, interacting with Simon, and mundane rituals, I’ve been practicing and writing. Today I practiced sitting meditation for 45 minutes right after I woke up in front of an altar made to celebrate my recent graduation from the 5Rhythms teaching training program. Later in the morning I did yoga. And meditated again after lunch. It wasn’t until mid-afternoon that I finally got around to 5Rhythms practice.

I’ve been hobbled by a sore back since yesterday; and I wasn’t sure if it was advisable or even if I would find any inspiration. 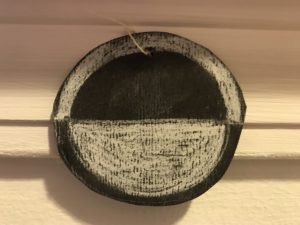 I thought of something Gabrielle Roth, the founder of the 5Rhythms practice, wrote in her first book Maps to Ecstasy about a student who was having severe back problems. She wrote, “After doing the rhythms for several months, her whole body started to loosen up. Now, when her back starts seizing up, she moves gently to the rhythms rather than giving in to the spasms, and the tension eventually subsides.”

I vowed to move gently and rolled up the living room rug to reveal the hardwood dance floor beneath, put on a playlist I already had made, and settled in. The day before my practice had been flat, and I wasn’t sure what I would find. 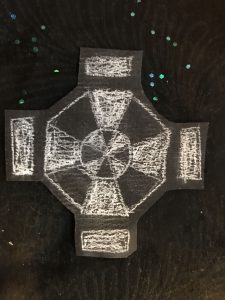 I began to move in Flowing to a lullabye-sounding song that I danced to with Simon on my shoulder when he an infant. I felt fully engaged, and looped around the space, feeling the soft give of my feet, rocking up like the swinging pirate ship ride at the amusement park, and falling slowly back down the other side of the loop, then turning and circling and rocking upward again. I felt no rush to progress beyond Flowing, and was grateful that the playlist still had two more flowing songs to move with. I remember now that I was also crying in this part.

I sneezed hard and felt the muscles in my lower back clench, and wondered if frequent sneezing might be a factor in the lower back distress.

As the playlist cued me into Staccato, I discovered that raising my knees high and crossing over the midline of my body caused pain, so I found different ways to move instead. The staccato songs on this playlist are irresistible to me, and today was no exception. Before long I was moving in sweeping diagonals, stepping back and across hard, turning and even dropping low. A fast Staccato Chaos song brought me even lower and jittered me, flipping me through the spine, and continued to pull me along. “Just take this ride, Meg. Don’t push anything,” I reminded myself.

The first chaos song was a delightful, twisting jazz track that coils me in every direction and angle, and today was no exception. I thought about skipping the song to try to avoid too much twisting, but something interesting started happening. Some kind of chemical release in the legs and spine. I wondered if Covid was working its way out of the spine and out of the body, and dug a little deeper, let go a little more, gave myself a little more permission, and let the sacrum lead the rest of me into release.

The last chaos song was wild, and I growled with ferocity, trusting something in me, in my body, in my ancestors, in my teachers, that told me this dance was necessary, that told me I was moving something that needed to move, even as I shuddered, sunk low in the hips, jumped my knees in crazy forward and side-out patterns, and contorted and released my face as my released head whipped all around.

Lyrical found me grateful, shining. Still moving with engagement, though with slight hesitation. 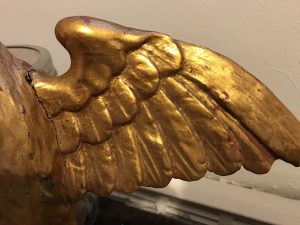 During the one brief Stillness song, I watched my hands in the darkened TV screen that is mounted on the living room wall, gave thanks, and almost immediately started thinking about all the things I would accomplish in the afternoon.

Then I put myself in the shower to rinse off whatever poured out in sweat and sat myself down to write.

Meghan LeBorious is a writer, teacher, and meditation facilitator ​​who has been dancing the 5Rhythms since 2008 and recently became a 5Rhythms teacher. She was inspired to begin chronicling her experiences following her very first class; and she sees the writing process as an extension of practice—yet another way to be moved and transformed. This blog is not produced or sanctioned by the 5Rhythms organization. Images in this post are courtesy of the writer.