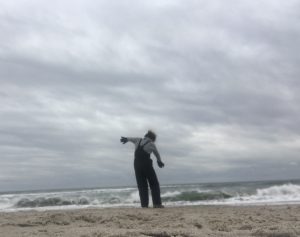 The first time I set foot in a meditation center was on Martin Luther King Day in 2007. I had to work during the day, but I felt called to find a way to observe the occasion in the evening.

I snuck in an internet search at work, and found that a meditation center in the West Village was hosting a public sit that evening. Meditation felt right to me – a way to reflect on and honor the legacy of Dr. King and countless other activists who have given their labor and lives to the cause of racial justice.

There was never a time that I didn’t meditate, but this was the first time I found myself in a mediation community. Previous to this, whenever someone brought up meditation or anything else that seemed New Age-y I would roll my eyes and make sarcastic comments, even though I was meditating daily myself.

Following this night, I was swept onto a new path entirely.

Today, I hadn’t been to dance with the ocean in a couple of weeks. I dug through storage to find ski clothes, and put on snow pants, winter boots, wool socks, a sweater, ski jacket, neck warmer, hat, and gloves.

There was very little traffic, and I arrived in less than 30 minutes. The giant parking lot at Jacob Riis Park Beach in Queens was almost completely empty, owing to the frigid temperatures.

The sand of the wide beach was laced with ice. The old wooden pilings that were being slammed by powerful waves had ice caps. And the tide was low, leaving a wide area of packed sand for a dance floor.

Once I stepped onto a path of meditation, I progressed quickly. Thankfully, the tradition I joined had an initial linear path, so I didn’t have to ask too many neurotic questions about what to do next. I just kept stepping forward.

Today, I drew a giant circle in the sand, then walked around it three times, calling my teachers, ancestors, spirits, guides, and deities. I decided to record myself this time, and pulled off my neck warmer to prop my phone onto. As I began to move in Flowing, I occasionally glanced at the phone, checking to see if I was in the frame.

I asked for answers to some questions that seemed important to me in that moment: Where does the swelling anger that rises in me at times come from? What should I do about a particular work dilemma? What is my path forward?

Less than a year after I stepped onto this meditation path, I also stepped onto the 5Rhythms dancing path, and the two traditions have worked together to dismember and remember me again and again.

Over the years, I’ve thought a lot about how meditation can support racial justice, especially since I teach meditation to teens of color in a Brooklyn high school. Meditation can make us aware of the inner stories and assumptions that drive our words and actions, the necessary prerequisite for beginning to mitigate our internal biases, including internalized oppression. Meditation and other forms of practice like the 5Rhythms can also be essential triage and harm reduction for people who may be subjected daily to harms arising from living in a racist culture.

From my perspective, the purpose of practice is to be fully in reality – that is to say without the filters of coping mechanisms, escape behaviors, racist assumptions, the push and pull of desire and aversion, stuck emotions, ego attachments, unprocessed trauma, cultural conditioning, and internalized oppression.

No wonder that it was on Martin Luther King Day that I first found meditation as a path. The call is not only for individual practice, but is also a prayer for collective awakening.

Today was cold and I knew I had to get moving quickly. As soon as the giant circle in the sand was drawn, I brought attention into my feet and began to move with the pull of the deep sea and the dynamic, shifting waves and tides. I also started working with the feeling of having weight in my hands and feet, and let that draw me into circling and shift me through different levels and spinning tracked circles.

I was in no rush to leave Flowing. My body felt like it was sloshing, rolling liquid in a container. Today, I kept rising and presenting my chest, then falling back into circling. I sang whatever bits of songs drifted into my mind, grateful to be almost completely alone and more free to vocalize. Lately, I let my body dip and fall in circling, then catch my weight and spin again around the track I’ve created.

Work has been shitty lately, and it doesn’t seem like I have many options to improve it at the moment. I didn’t expect Staccato to arise easily, so when it did it surprised me. First it just peeked through my patient, delighted circling. I took off my coat and moved with confidence and vigor, still bursting my chest forward, now sitting back low, squatting, dropping, growling, and calling out with guttural force. I moved forward and back in a line, hesitating then bursting, then stepping back across, using the elbows to power my gestures, receiving an answer to one of my burning questions.

I kept myself in Staccato just a little longer when I was already feeling the pull of Chaos, and finally letting myself fall into it. After the drawn-out ferocity of Staccato, I thought I would stay in Chaos at length, but today it blew through like a storm. Lyrical, the fourth of the five rhythms, lifted me and also blew through quickly. 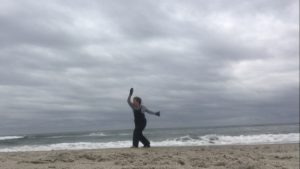 Stillness found me tiny, a little speck in a gigantic landscape with the roaring sea stretching to the wide horizon and luminous overcast sky huge above me.

A few weeks before when I was dancing with the sea, a pod of whales appeared, shooting water through their blowholes, with a crowd of sea birds swarming around them.

At this point, I started crying from the throat and belly, almost braying. I don’t even know what rhythm I was in at this point. In fact, most of my practice today happened after the first wave completed itself. I kept thinking about the whale that was beached here in December, how it died alone. I thought about the likely future for whales, the likely future for the earth, and ongoing, entrenched injustices. I cried a lot, pausing to compose myself when a lone pair of beach walkers strolled by, then shifting into a bounding Lyrical, then back into sobbing. Now I was moving with gratitude and freedom, still sobbing, still moving. I laughed at myself, then started crying even louder.

Eventually I was empty. The questions I had dropped into the well of practice were answered, as much as they could be for now. I was ready for Martin Luther King Day. I knew the way forward. Remembered. Back where I started and ready to begin again.