Dancing with the Sea: A Magical Encounter

I didn’t even know snow was in the forecast until I woke up and looked out the window. 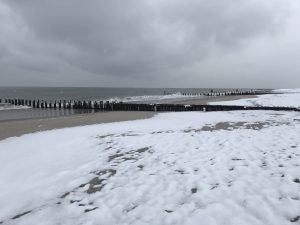 Following an in-person yoga class, I wavered on my plan to go to the ocean to dance the 5Rhythms – my Sunday ritual since the beginning of the pandemic. The snow was coming down pretty hard, and it was the goopy, wet kind of flakes. I didn’t have a hat and couldn’t turn one up even after rummaging through the car. In the end I decided I might as well give it a try. If it was horribly uncomfortable I could always bail.

I had made my weekly pilgrimage in less temperate weather than this, I reasoned. Plus, when the weather is horrible, there’s a good chance I can actually be alone, which means I can scream, cry, move like a demon, sing loudly, or allow whatever comes through in a way that I’m unlikely to do if there is anyone around to see me.

In the car on the way, I heard Bulgarian journalist and activist Yana Buhrer Tavanier on the topic of play even in the face of grave circumstances, and carried her words into my practice. I tightened the laces on my snow boots and jogged across the wide sand, pausing to examine whatever captured my attention, allowing curiosity to be my guide.

I noticed a set of footprints and started following them toward a sand dune, talking cheerfully to myself as I roamed. 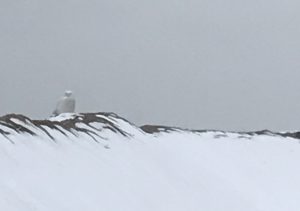 My eye caught on what I thought was a seagull perched at the top of the sand dune, barely visible with the white snow and white feathers against the white sky. I wondered why this seagull was sitting so upright, not like rubber-ducky posture like seagulls usually sit when they’re resting. This bird was vertical, with dignified shoulders. Could it be an eagle? It was also bigger than most seagulls, and totally white. It didn’t even have an orange beak. Then, she twisted her neck around like it was on a track and I wondered if she might actually be an owl.

I took a few pictures, then crept a little closer, daring to take a video. I honestly couldn’t believe it. Owls seem magical to me – a symbol of wisdom, power, and ancient mystery. She stayed a little longer, then got spooked or maybe annoyed and took off down the beach, gliding low.

I got onto my knees and touched my forehead to the cold, wet sand.

The snow had slowed, but picked up again, landing wet on my forehead and cheeks. I began to move in Flowing around the jagged contours of ended waves. Often, I pick a spot, put my bag down, and even draw a big circle to dance inside of. This time, I let myself move wherever I wanted to, at one point going to examine some thick tangled rope, then reversing course and heading west along the edge of the water. I was grateful to be alone and vocalized loudly, moaning, crying, and even making up songs and poems, then offering them to the sea and the sky.

Today I wasn’t sure which rhythm I was in, I just knew that I needed to move. Streams of wisdom poured through and I gave voice to all of it.

The snow picked up more, to the point that the sea and sky were barely distinguishable.

I climbed up onto the dune, dancing along its spine and looking for evidence of the owl, at one point in Chaos letting myself go while trying to avoid tumbling down either side of the dune.

I walked back across the wide beach feeling tall, striding – despite the cold, despite the winter, despite the state of the world. Remembering my place in things. Heartbroken and free. Grateful. Alive. Ready.