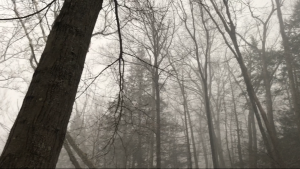 My phone screamed an alarm “Weather Advisory: Snow Squall Warning.” I was already in the woods anyway. Besides, snow squall didn’t seem so scary. It wasn’t like “tornado” or “microburst.” I ran a fast loop around the trail, then chose a spot to dance a wave on the bank of the swollen Scantic River.

The temperature had dropped suddenly, and the snow had already started up. I fumbled with cold hands, trying to take a video of the water rushing around a recently felled tree. It had torn up a whole corner of the hiking trail and left a new, raw cliff.

Beginning to move in Flowing, my phone screamed again. I ignored it and continued to move in looped circles, with no beginning and no end, no edges and no stops. Visibility dropped as snow fell wet and heavy against my cheeks and forehead. The wind started to pick up, too, and the bare trees rattled together high above me. “I think it’s time to head back to the road,” I reasoned. 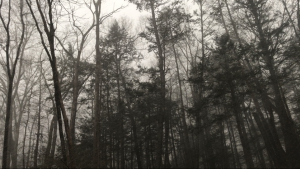 I thought about the giant tree that had been felled across the river, and wondered about the probability of big branch landing on my head. My twelve-year-old son, Simon called just then. “Mommy, are you heading back soon?” “Yes, I’m on my way. I’ll see you soon,” I said as my phone lost battery.

I made my way back to my parents’ house, where we are staying for the weekend. I didn’t get to dance a wave in the woods today. No need to be a hero this time. Tomorrow is another day. 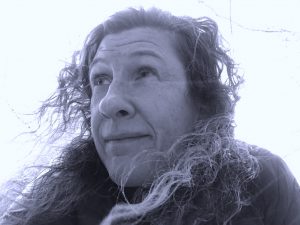