I woke up at some point during the night. Things I hadn’t gotten around to yet that had been nagging at the edges of my mind moved to the foreground. Even so, I kept bringing attention to any muscle that tightened and encouraging it to relax – forehead, stomach, jaw, the arches of the feet. Eventually I fell back to sleep.

After meditating and several hours on the computer, I decided to run to one of my favorite places, a small system of trails near the Scantic River in Northern Connecticut, where my twelve-year-old son, Simon, and I are staying with family this week.

I was surprised to find several utility vehicles near the modest river, and picked up the pace to investigate. My attention shifted suddenly when I felt a pinch in my right inner thigh. I paused and gently stretched it, hoping it wasn’t a pulled muscle. A couple of weeks before I’d had a similar sensation while running, but it had disappeared overnight.

I moved out of sight of the utility vehicles, looking for an inspiring spot where I could dance a 5Rhythms wave, part of my daily personal practice. The light rain picked up; and I wondered if it would rain hard enough to damage my phone. I climbed down onto a small, muddy beach but quickly realized that the mud and the slight incline would be too much of a strain on the vulnerable muscle, so climbed back up onto the main trail. 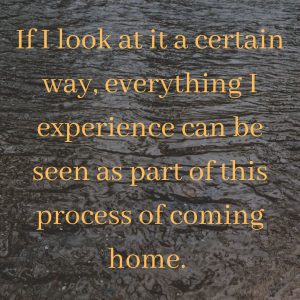 I moved cautiously, taking care not to cut into the muscle in question, and began to circle in the rhythm of Flowing. Some writing I had been working on drifted in and out of my mind, bringing new ideas and perspectives. I continued to move, not holding tightly, knowing that whatever is important would still be there when I sat down to write later.

Needing to move cautiously made it harder to feel engaged. I decided to make a video to show a viewer what Flowing might look like from my perspective. This idea drew me in, and soon I put the phone away and started imagining what the palms of my hands were seeing as they moved all around me, above, below, around, behind. I moved in a looping matrix, seeing with new eyes, including things that are normally invisible. Soon, I also started to “see” with the soles of my feet.

Moving into Staccato, I played with slicing the air with the edges of my hands, sinking low, though continuing to be careful of taxing my legs or twisting too suddenly – more ideas for writing and life came and tested themselves out. A very slight pop in the side of my right knee seemed to relax the tight thigh muscle in a tiny increment, but I continued to move gently.

Chaos was subtle today, too. I started with jiggling my right leg, then the left, and let myself bob and coil until a quiet Lyrical emerged through the tops of the bare trees. Stillness brought me back to the sound texture of the river and the cold rain on my face. I also remembered the feeder stream to this river, the river this river feeds, and all the bodies of water they connect to.

Then I ran back home. In fact, if I look at it a certain way, everything I experience can be seen as part of this process of coming home.