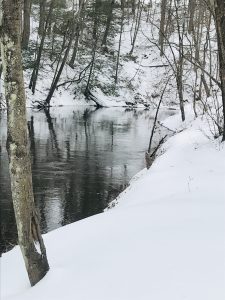 When I heard this sound I had already danced a 5Rhythms wave on the snowy bank of the Scantic River and was sitting cross-legged inside the circle of snow that had been packed down by my dance. I was offering thanks and saying a prayer for 5Rhythms teacher Mati Vargas-Gibson, who is terminally ill at this time.

I got back up from my seated pose, and moved in the rhythm of Staccato, dedicating the dance to Mati, someone I have never gotten the chance to know aside from a few digital interactions, but who I have very much admired and have hoped to one day connect with.

I moved with my exhalations, listening carefully for the woodpecker who was making this gorgeous pattern, hammering away at a tree on the other side of the river–measured and persistent. In no rush and clear on her objective. Confident that if she kept at it she would find what she was looking for.

Earlier I had parked by the road and hiked in–breaking the surface of new snow as I made my way to the river. 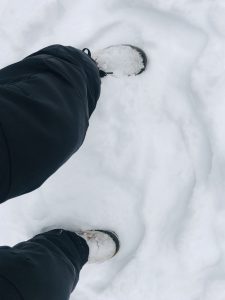 I wandered around looking for the most inspiring spot to dance, eventually finding myself in a small clearing on the river bank. Beginning to move in Flowing, I noticed a lot of work ideas coming and going, sometimes hanging on for long trains of thought. My feet moved without friction on the snow. As the snowfall got heavier I tried to watch one flake at a time as they cruised to the ground, but soon gave up and surrendered to being part of this quiet crowd of endings and beginnings.

Back to the dance with the woodpecker, her clear patterns became more erratic. I followed her, loosening, coiling, still moving to the beat she was tapping out but giving up on trying to understand it, giving up on finding a way to translate it, just spinning and quivering and falling and rising.

As Lyrical descended I remembered my hands, and noticed the sensation of the soft ski gloves on my fingers. My perspective widened. I heard the gurgling sounds of the river and identified the water obstacles that were giving rise to them. I also noticed the complicated patterns of ripples on the river’s surface and began to move with them.

In Stillness, I was porous, moving with infinite patterns now, grateful to the woodpecker for providing a rhythm to move with, for reminding me that all of existence can be read as a score for our dance.

Blessings to you, Mati. Thank you for your many gifts. May your memories rest lightly at this sacred time. And may your wisdom and teachings live on.