Today was the first day in a long time that work thoughts weren’t dominating my mindstream.

It has been a wild ride at work lately. We are very short-staffed at the school where I teach, and everyone is wearing too many hats and working too many hours – the case pretty much everywhere in the country. As a result, things have been extremely chaotic; and there simply hasn’t been time to process events given the intense pace. On top of work challenges, my 11-year-old son, Simon, has had a difficult couple of weeks himself, which preoccupies me, though I know he has the ability and confidence to move through the challenges that arise.

The first thing I did this morning was create a new altar. The previous summer-themed altar had been lingering for too long. I pulled out all of my boxes of special objects and cloths, and assembled an altar in honor of my ancestors – both biological and spiritual – something I do every year around this time.

During the past two weeks, I’ve been distracted during meditation, often with thoughts of work.

Today, I sat down and was absorbed into a state of still concentration. Tears began to pour down and I rocked myself from side to side, “listening” to the wisdom of the ancestors. I had been contemplating extensively the role of a teacher, and my role in particular. The idea that knowledge does not come from a teacher came through strongly. A teacher sets the conditions and holds the container, but the learner makes the knowledge through their personal process.

I love how Albert Einstein, who was famously oppressed by his teachers, puts it, “The only source of knowledge is experience.”

The mistaken idea that a teacher is the source of knowledge (especially if the teacher holds this idea) leads to a fundamental misunderstanding. What poured through was the understanding that it is not me, it is not any genius teacher, but is rather source pouring through and taking its form in this moment.

This understanding is freeing, humbling, and empowering. Freeing because I don’t have to hold it all myself and I’m not solely responsible for what arises; humbling because I understand that teaching does not serve my individual ego, and empowering because the well of power that flows from source is infinite, and is not limited to my own small reserves.

This insight feels important both in my work teaching mindfulness and meditation with teens in a Brooklyn high school, and to the 5Rhythms teacher training, which I am currently participating in.

I imagined my heart was an opening flower that poured light throughout my body.

After this session and breakfast with Simon I drove to Riis Park to practice the 5Rhythms.

As I crossed the wide beach, I considered picking up a scooped half shell, but rejected the idea since the shell seemed too ordinary – the beach was strewn with many similar shells and I already had a number of the same type at home.

But I pushed back on my own discrediting voice. “Yes, you DO need that shell,” I countered. And I went back and picked up the shell. I found two more, and decided to create another altar, this one on packed sand, with the three shells representing past, present, and future.

If I hadn’t gone back, I don’t know if the world would have opened to me as it did.

I wandered aimlessly, feeling like the world was unfolding to offer its magic to me, and like I understood the language it was speaking. I found a large, compressed, glittering rock and put it into the past shell. I found a piece of smooth, striated, peach and purple shell and put it into the future position.

The present shell I filled with beach glass. I’ve been collecting beach glass my entire life, following a passion of my mother’s. I love that glass is made from sand, and sea is in the process of returning it to sand, and that the glass is made by human hands, and that its journey is a collaboration between humans and the elements.

Today beach glass was more abundant by a factor of two or three than it has even been in my life; and I was finding giant, translucent pieces with smoothed edges in dark green, light green, aquamarine, brown, and frosted white.

These jewels were being offered in abundance; and it seemed important that their sharp edges were now refined and smoothed down.

I moved closer to the water, and began to range across the packed sand. Today Flowing felt whispery. My body was both heavy and light at the same time. A flock of birds circled over the water, looping as white shapes, then disappearing into thin lines as they curved, then coming back as a flock of white shapes and looping away again. 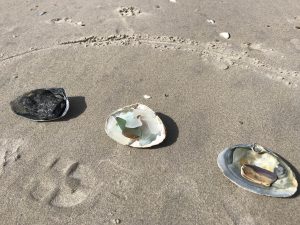 I stayed in Flowing for a long time, asking for help with a difficult decision and letting the universe pour in. Sharp stones and rocks were under my bare feet, but my feet stayed aware so even when I stepped on a sharp edge I was able to soften and avoid injury. I let the push and pull of the waves and gravity as I moved up and down the sloped sand move me in circles.

Staccato started to spike, and I began to exhale more forcefully.

I fell back into Flowing again, noticing how much physical activation came from moving into Staccato, and how much I preferred to stay in Flowing, or move through into Chaos.

I started to move from one shell or rock to another, imagining myself as a fighter. I directed force in different directions, vocalizing, dropping my weight, and shifting my gaze. 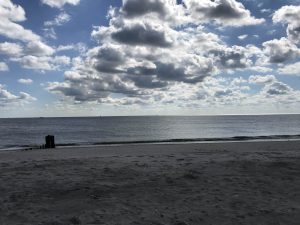 Finally, Chaos started to come through and I let fly. At first it seemed whispery and patient, like much of this wave, but before long it turned demon-fast. I was flung around by my whipping and coiling spine, tossed off balance and turned out, the bright sun shifting to cloud cover and back to bright sun, turning my vision orange behind closed eyelids, throwing shadows across the sand and sea.

This was written on October 17 near the full moon, and I returned to the beach again today, now almost to the new moon. Though the tide was low, the surf was wild, owing to heavy winds. Someone was kitesurfing down the beach – a graceful, green curved kite held taut against the wind that dipped and curved like a dragon. I moved along with it, with clouds racing across the sky, waves piling up and crashing, and birds soaring in shifting groups. I kept thinking: I remember I remember I remember.

I remember the way home.