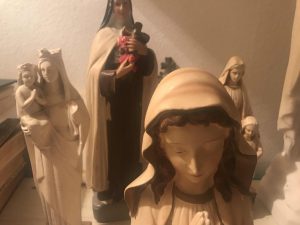 My Auntie Mae survived 100 years and four months. She was an institution, holding one corner of a huge family together. And she was kind, good-humored, and deeply committed to her Catholic faith. Because of this strong faith, the family held a traditional funeral despite the ongoing pandemic. I traveled to join them in Northern Connecticut while maintaining social distance.

When everyone was inside the church, I sat on the steps outside and meditated. I was supported by the step behind my lower back and my ankles were folded in front of me. I rocked slightly from side to side, enraptured by the racing clouds, and feeling the chilly wind on my arms.

After many extremely busy days when I could barely take in this loss, a range of emotions tore through me: grief, for the loss of my aunt, for all she takes with her, and for the painful fact that everything dissolves and changes, even my own precious life and the lives of those I love. At moments I lowed with sadness, then settled back into calm rocking. I also felt fear, as COVID cases rise in Brooklyn–where I live along with my ten-year-old son, Simon–anxiety, intense job stress, joy, nostalgia, and tenderness.

I felt very close to my aunt in these moments, even though I wasn’t inside the church observing the Catholic rituals.

When the rest of the family went to a banquet hall, I made a cup of tea in the attached apartment at my parents’ house, and carried it next door with me to sit on my Aunt Mae’s steps. I watched the ghosts in the windows and yard, seeing a movie of my own parents’ wedding in the driveway on my father’s 21st birthday, imagining the tobacco and vegetable fields that the family once owned, remembering picnics long in the past, thinking of the Christmas Eve parties that I have attended every year of my life in the house, and of the antique wooden toys in a chest in the living room that my mother, now 69, played with as a toddler, that I played with, and that Simon also played with.

I sat there patiently for some time.

Then I went to a place my grandfather loved, in the woods by the Scantic River. I drew a big circle in the soft dirt and danced inside it. I spent ages in Flowing, and wondered if I would ever move into the rhythm of Staccato. When Staccato did finally present, it was gentle, muted. Chaos was the same, releasing me in tiny increments. Lyrical shifted me quickly into Stillness, and I gazed up at the sunlight breaking through the leaves far above, and felt the currents of the river pulling resolutely along.

A few days later, I attended Henya Emmer’s weekend class in Battery Park, led on this occasion by Ray Diaz. 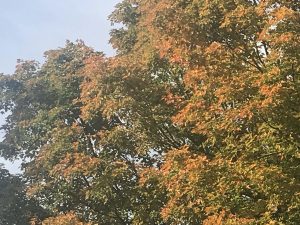 That morning I had done a remote yoga class with my cherished teacher Maria Cutrona. At the end, I stayed on the floor rather than rising to join the circle. I had the curious sense that I was spinning down through deep space; and remembered that as a teen I would feel the same sensation after a long run, while laying on the roof of my parents’ house in the sun with my eyes closed, some kind of unknowable source briefly opening its portal.

Ray greeted me with an extended elbow as I entered the tree-lined enclosed circular area near once-immigration-center Castle Clinton and Pier A, a dock for large tourist boats. 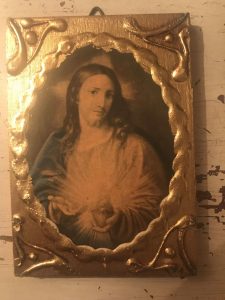 I checked in, then stepped onto the dance floor. Trees curved above, lawns stretched behind, and boats glided by on the Hudson River–close to its transition to the Atlantic Ocean. The pavement in this area was set in rolling circles, perhaps once home to a fountain, next to the famous Castle Clinton national monument.

Ray started us with an invitation to shake and I dove right in. This is a silent-disco-style event; and I held onto my headphones to avoid accidentally flinging them off. Soon holding the headphones became part of my dance, and I experimented with tipping myself and balancing the headphones on one side of my head. At times, I held the headphones in my hand and danced without music, especially when I was swept away.

I took my shoes off in Flowing and moved off to the side, where instead of pavement there was soft gravel. The sensation was too much, almost tickling. It forced me to slow down, but I before long I put my shoes back on.

I thought of my teacher Maria Cutrona’s words from the same morning, “The world needs you to believe that you can be a healer.”

“It’s time to wake up,” Ray said firmly into the mic as we shifted into the rhythm of Staccato. I ranged around the circular dance floor, then moved again to the soft gravel at the side closest to the river. I danced with my own shadow, rocking my hips with big, powerful arms. “Use your knees to power it,” Ray encouraged, and I became ferocious, sinking low and settling back into the hips, bursting and spinning, and pausing with creative vigor. “Give it a voice,” Ray further encouraged and I vocalized along with the group, only dimly aware of how odd it must seem to passersby who were out for a dusk stroll in the park. 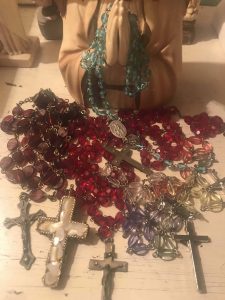 In another phase of the class, Ray put on a compelling Reggae song, and I shifted from stretching to breakdancing, toggling my knees fast back and forth with one hand on the ground, then leaping into heavy balances and spins, and hopping back into my outstretched heel.

Ray played song after song that delighted me, including the Cold Play song with the lyric “You’re a Sky Full of Stars” just as dusk gave way to darkness. I settled into a dripping Stillness and swept through the shared dance space with great inspiration and love.

Sometimes in the silent-disco format I feel a bit lonely. Not so tonight. I felt connected, inspired, athletic, and free, believing for a time that everything was perfect and that I had everything I needed. Connecting to something I can only call source, and grateful for every dripping minute. Grateful to be alive, in this odd, frightening, complicated time. Grateful for the chance to breathe, unapologetic.

Moving with the gliding boats that were casting light reflections on the wide river, I realized at last that it was fully dark, and time to shift into rest.

Photos: Original images by the writer of objects from the home of Mae Grigely, October, 2020.