The car’s thermometer said it was 18° Fahrenheit. It didn’t seem that cold, but it definitely wasn’t a busy day in the park. 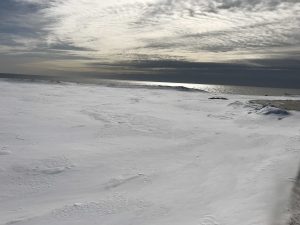 Today was a holiday for my work but not for my just-turned-11-year-old son Simon’s school so I had the day to myself. I considered doing some work and handing personal red tape, but my body was vibrating, wanting to move. Sitting at the computer was the last thing I wanted to do.

I pulled ski pants on over heavy leggings, put on wool socks, a heavy army-green coat with a hood, boots, and a hat, then packed a balaclava, ski gloves, and extra socks. I didn’t doubt that it would be frigid at the beach, where I was headed.

Since the start of the pandemic New Yorkers have gotten much heartier when it comes to cold. Soccer practice is still happening in the park, brave diners are gathering with friends on snowy outdoor restaurant patios, and kids are chopping up playgrounds that would normally be deserted when the temperatures take a dive – it’s not just me who’s been pushing my limits.

This year, I’ve been dancing with the sea a lot, including in light rain, snow, and in extreme cold like today. It’s actually become a practice of its own, and has allowed me to deepen my relationship with the ocean, and by extension with the depths of myself.

Arriving at Riis Park to the south of Brooklyn, I was surprised to find the gate to the massive parking lot barred and the lot in significant snow. It’s normally open owing to a year-round golf course that you enter from the beach walkway. I was able to drive in through the exit, and there was a narrow, plowed corridor down the mile-long, mile-wide parking lot, so I drove along it, stopping briefly to ask the operators of the only other vehicle there – an official NYC van – if parking would be ok or if I would be towed.

This was the most deserted I’ve ever seen it. I stuffed what I needed into the pockets of my coat and zipped the car keys in, then headed toward the water. To my surprise, even the beach was in deep snow. I’m not sure why I didn’t expect that, but it looked like difficult going. Instead of walking straight across the wide beach, I made my way along the cleared boardwalk to gain easier access. 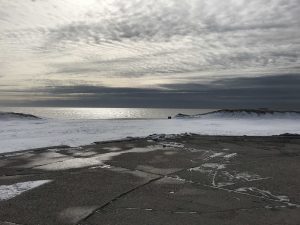 As I stepped off the walkway onto the deserted beach, two officers who were leading morgan horses approached. I tightened, assuming I would be told I had to leave the beach. “Can you take a picture for us, please?” a female officer requested. I agreed and she introduced me to the horse, smiling. Both officers and the horses stood handsomely posing, the sun in their eyes and smiles broad. Handing the camera back, I took off quickly, still imagining they might decide to send me away.

The beach was a vast white expanse. During the winter, workers make little mountains of sand, presumably to protect the boardwalk structures from being pummeled by winter storms. These man-made dunes were also covered with snow, with patches of beige sand poking through at the top.

The tide was high and the waves were crashing ferociously, but there was still enough packed sand for a dance floor. I took off a glove to answer a call from a 718 number – hoping it wasn’t a tow truck operator in the parking lot calling because of the note I’d left on the dashboard, “Pretty Please don’t tow! Call and I’ll come right away if you need me. Just at the water’s edge.” My hand got cold, so I put the glove back on and spun my arm quickly around the shoulder, using a skier’s trick to bring blood into the fingertips.

I knew I had to get moving or get cold, so I started to circle, in heavy boots and the big winter jacket tight around me with extra gloves and wool socks tucked into my pockets.

Today Flowing was sensual, despite these encumbrances. I dropped my weight low and let myself be pulled by the ended waves that were washing back into the sea. I patiently circled up a sandy incline, then circled back down it, feeling the weight of gravity – my own core feeling its home with the core of the earth, pulling me toward it, magnetic, dense, bringing me low, in sinewy gestures and arcs.

My feet were wide awake today despite the boots and heavy socks; and I kept bringing attention to the sometimes minute shifts of angle and pressure on the soles of my feet that gave rise to every other movement; and I surrendered all of me to these tender moving feet.

Before long, my hands felt warm. I took off the heavy coat and placed it on the sand close by.

Feeling lighter, I tracked the receding waves and the waves that arrived to counter them, dipping low and reversing the circle as a wave pulled back out, sideways.

I told myself that if I wanted to stay in Flowing all day, that was just fine. That there was no need to force or to rush. That I could be patient and let the body show me its truth.

Staccato began in tiny hits, then fell back away to Flowing again and again. I moved through my body parts in Flowing then came around to the elbows, and enticed myself into the rhythm of Staccato, before long involving the tail bone, the entire spine, and releasing the head so it wouldn’t stop the powerful through-gesture of the body.

I brought attention to a hovering wave and the moment when it gathered itself up and reached its full expression before crashing apart. And again, thinking of drawing energy in, and then of holding, of containing the energy in a certain part of the body, of a wave taking full form before letting it cast down the other side and leave my body again, finding it in my gestures.

I’ve often felt the impulse to stave off Chaos – a place I am very comfortable – when I first start to feel it, but as I write I find new language for why. Holding energy in Staccato and letting it find form is a way to work with power, a way to conduct energy, to build systems, to bring things into being. Gabrielle Roth, the founder of the 5Rhythms practice, said, “It’s not like you’re just flinging yourself into the beat!”

Finally letting it blow itself to bits as I began to spin and dip and blind myself with motion was a sigh, and the dramatic, crashing ends of waves came to my field of attention.

Though I was sure there were no other cars in the entire gigantic parking lot, a lone person came striding up the beach. I was once again sure it was a police officer and that I was busted, so I avoided eye contact, hoping in some way to hide on the open beach.

Lyrical had already been tempting me, and I walked right into her arms, expanding my radius while trying to avoid eye contact with the passerby, who no longer appeared to be a police officer. Relieved, I briefly performed for this other lone beachgoer, leaping into the edges of myself, prancing and smiling as she passed without looking back.

Soon I passed through the rift of Stillness, scanning the horizon for 360 degrees, sensing the ocean’s deepest densest places, and seeing the thick darkness outside of the protective rim of sky blue that gives us breath.

I couldn’t move slowly for long without cold taking me over, so I made my way, pausing to climb one of the sand dunes and survey the beach before heading back up the boardwalk to the car. 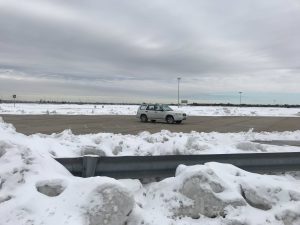 I toyed with the idea of working or writing for a few hours, but knew before I parked how I wanted to spend the rest of this precious day.

Pausing only to wash my hands and take off my winter clothes, I created a playlist, adding a few songs I’d heard on traditional radio during the car ride home from the beach.

I thought I was alone and that my roommate had left during a dark, wild, 150 bpm chaos song, but he saluted me on his way back from the bathroom as I picked up a microphone and plaintively sang a Lyrical Stillness tune, a song that made my heart ache.

Self-consciousness paused me, but only briefly, as I continued to move in Lyrical and in Stillness. 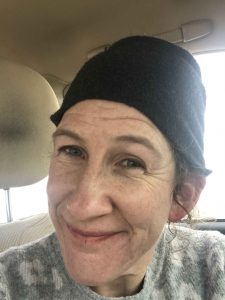 My computer battery died and ended the music, so I sat down to write, grateful to have physically exhausted myself for the first time in weeks, grateful to the 5Rhythms and to Gabrielle Roth, its creator, for opening the world to me. I was also grateful to myself for showing up, for being self-generating, and for finding new capacities, even as we face obstacles, even as the pandemic slowly starts to leave our bodies, and in many ways slowly begins to release us.