Take Me to the River

Dancing near the humble Scantic River today, language rolled through me.

Out on a run, I was drawn to a smooth beach, its surface wrinkled with recent currents. It had poured on Christmas and nearly a foot of snow had melted in a single day of warm temperatures, and the river had overwhelmed its usual path. The water had since receded significantly, leaving me this perfect dance floor. 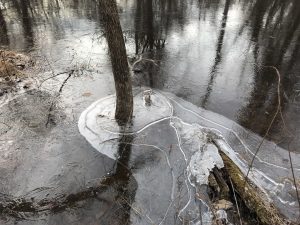 I began to move in the rhythm of Flowing, using the shore’s incline to pull me into circles. At the edge of the water, the frozen mud gave slightly, making a subtle crackling sound.

My ten-year-old son, Simon, and I are staying with my parents for two weeks over the holidays, on a short hiatus from our lives in Brooklyn, where fears about COVID continue to impact our lives significantly.

Being pulled along in the direction of the river, I rose up onto a walking path where it was easier to see the surface of the water. I observed that although the main gesture of the water is pressing in a curving line toward the sea, there are infinite sub-gestures. The closer to the edges, the more coils and eddies and interruptions.

I let this be my musical score, dropping my hips low to spin and loop back, catching the drift of a different current, slowly making my way by curving around fallen trees to greater space on the other side, then getting caught inside another eddy where I whirled for who-knows-how-long before a floating branch came by and shifted me out of my spin. 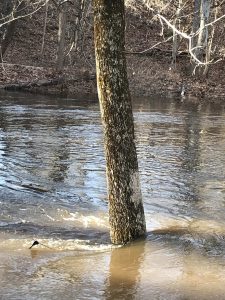 I reflected on the passing year. On the slow crushing roll of the pandemic and the toll it has taken, on families, on communities, and on the fact that it has killed nearly twice as many people of color as white people. I reflected too on the murders of George Floyd, Breonna Taylor, Ahmaud Aubery and so many others, and on the protest movements these events have catalyzed. I thought about Simon and his learning pod, a group of four students who meet every day to learn and connect, and of the many challenges of establishing and sustaining this construct. I thought about the six months Simon and I spent living with my parents, of our thriving vegetable garden, of dancing every day in the woods or the yard, and of our nightly dinners, where all four of us lingered long after the food was eaten, talking about social justice and its despicable enemies and challenging each other’s assumptions. I thought about washing floors every day, opening boxes with gloves, masks, alcohol pads, facial shields, and hand sanitizer. I thought about teaching remotely and the challenges and insights it has brought. I thought about sleepless nights and then the explosion when Joe Biden was declared the winner of the US presidential election, when I personally went bananas, and New York City exploded with a brief interlude of unbridled, uncaged, untethered joy.

Flowing, I knew that whatever language came I could watch with curiosity as it passed through my mindstream. That there was no need to write it then or to try to capture it, that whatever arose that was needed would still be there later, when it was time to write.

I smiled, remembering a canoe trip during summer 2020 on this same river with Simon and my father, where we encountered obstacle after obstacle, but were able to work through them, a relief after so many grueling months of daunting uncertainty and countless challenges. 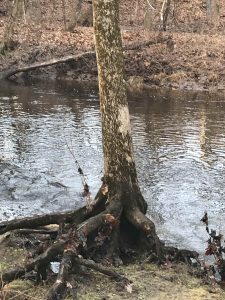 Staccato touched me between the river’s undulating coils, decisive expression arising periodically, then settling me back into circling. It took some time to notice that I was in Chaos, coming so quietly today as it did. I spun and dipped with bits of stories, a softly released head, fragments to write later like bits of broken mirror, watching bits of psyche flash by in the process.

A creative project that knocked at my door for years has found its voice in me, and I’ve been swimming in it for the last several days, in the process of giving birth despite periodic, crippling self doubt and anxiety.

Lyrical had me rising up onto a slight incline, arms raised high and moving around a bigger radius.

Stillness brought me back to the river, and to every river, feeling its currents pass all the way through my body. I remembered another time when I danced with the majestic Hudson River near Garrison, New York. I was on a meditation retreat, and still made time to practice the 5Rhythms every day. On this day, I was going through the motions, uninspired, until something in the river beckoned me, moved me into a different space entirely, dancing with the cool, black density of the river’s deepest channels.

May you give and receive many gifts.

And may your river carry you to freedom,

In every way imaginable.