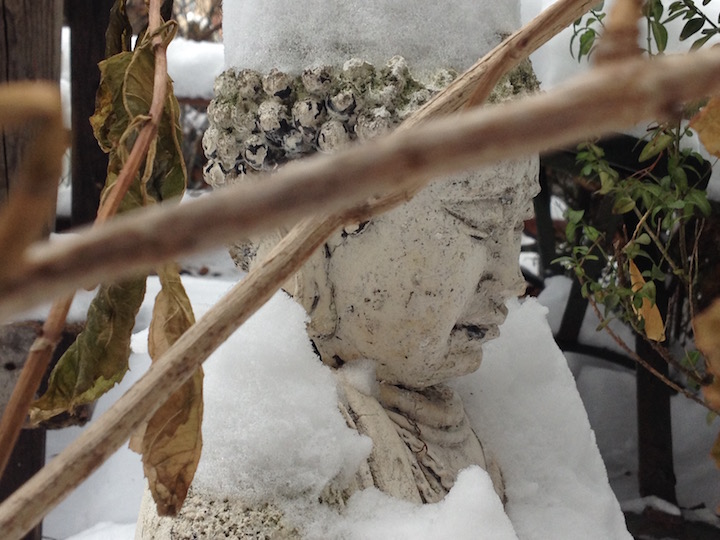 “The Earth is above you, below you, all around you and even inside you.  The Earth is everywhere.  You may be used to thinking of the Earth as only the ground beneath your feet.  But the water, the sea, the sky, and everything around us comes from the Earth.”  –Thich Nhat Hanh, “Love Letter to the Earth”

I have always loved benignly notable weather events.  I love the slower pace, I love that the collective experience of the weather dominates all of our minds, and that our push toward individual achievement fades—if briefly—to the background.  The unexpected accumulation of five or six inches of snow in the past two days is a delightful surprise.  Yesterday, my six-year-old son, Simon, and I went sledding in Fort Greene Park despite very cold temperatures, then returned to the warm house and sat on the couch together, each reading independently, our giant, fluffy cat purring and rubbing her head on us affectionately.

At the dentist in the afternoon before Tammy Burstein’s Friday Night Waves class, I had a scare.  The dentist gave me a shot of Novacaine and I felt a sharp pain in my cheek, then everything in my vision went double.  The dentist was convinced that my blood pressure spiked because of fear and that I was on the verge of fainting.  He told me to sit quietly for 20 minutes; and assured me that I would be fine.   A few minutes later, I noticed that vision was restored on my left side, but was still completely doubled in front of me and on the right.  “Have you ever heard of that before?” I asked him.  “No, not really.  I guess that is a little weird.  But you are probably going to be ok on a few minutes.”  The asymmetry concerned me, however.  I wondered if I might be having a small stroke, perhaps triggered by the sudden spike in blood pressure.  Next, I wondered if I could get a parking ticket forgiven if I had to take an ambulance to a hospital and couldn’t feed the meter.  I tried to relax by taking deep breaths and closing my eyes.  After a few more minutes, my vision was back to normal, but the dentist and I decided to hold off on filling the cavity that had brought me in to the office.

“We tend to think of the Earth as inanimate matter because we’ve become alienated from it.  We are even alienated from our own bodies.” –Thich Nhat Hanh

Arriving at Friday Night Waves class on the 5th floor of the Joffrey Ballet in the West Village, I took a soft lap around the perimeter of the dance studio.  Sometimes I come in with a rush, greeting friends with shining eye contact, happy to connect.  On this occasion, I moved subtly into the crowd.  Arriving to one of my favorite places in the room, not far from Tammy, and in the corner that is nearest to the home of the late Gabrielle Roth, the creator of the 5Rhythms practice, I sunk to the floor, where I stretched and undulated, moving into a very vigorous Flowing.  With both hands and both feet on the floor and twisted sideways, I let my hips and butt spin heavily, as a pendulum, then sprung forward and up, led by my feet and belly into a low coiled twist that felt like breakdancing.

Recalling my scare at the dentist’s office, I reminded myself to take it easy and stay out of my edges.  I could feel the adrenaline that had earlier coursed through my leg muscles radiating off of me.  Nothing hurt, no one triggered me, and I was not preoccupied with anything in particular.  I moved around, partnering occasionally and noting the presence of each person I encountered, saying internally, “I see you there; and I am grateful for it.” I met Staccato amicably, and as Chaos arose I continued to find myself fluid and released, moving around the room with great energy.  In Lyrical and moving into Stillness, light spilled out of the junctures of my joints, and I leapt and bounded, pulled by the tops of my wrists into extensions and cascading descents.

“Everything outside us and everything inside us comes from the Earth.” –Thich Nhat Hanh

Having moved through the first full 5Rhythms wave of the class, attending to each of the five rhythms—Flowing, Staccato, Chaos, Lyrical and Stillness—in sequence, Tammy brought us back into Flowing before pausing us for a brief demonstration and talk.

Tammy’s tone was tender as she delivered a lesson almost exclusively devoted to the rhythm of Flowing.  She seemed to be trying to find something in her gestures and said, “I wonder if I can even still do this?”  She moved as she spoke, continuing, “Never having been camping, for most of my life I have been urban, and in some ways disconnected from the earth.”  She went on to say that she had been at home with concrete, not dirt.  She would try to use her mind to figure things out, even, to some extent, inside the dance. “But that all changed after I started this practice,” she went on, “After many years, I started to realized that the earth is who we are.  And I don’t mean that as a metaphor!  It is our very essence.  It is what we are born from, what we come from.”

At that moment, Tammy’s entire orientation changed.  She got lower, literally, and some kind of fussiness, some kind of complexity in her gestures disappeared.  It was a deeper bass, an ear to the ground to hear the rumble of approaching animals, a full acknowledgment of weight and its activation in momentum.  The shift was both visible and palpable; and I felt blessed to be available to receive the lesson.

I connected with Tammy’s comments about not relating to the Earth.  The truth is that for many years Flowing didn’t really interest me that much.  I attended to it as part of the sequence, but I was eager to move on into Staccato and to Chaos.  I was more interested in personal expression, in intensity, in complexity.  I found the humility of Flowing kind of boring. I saw myself as urban from a very young age, and I was no hippy.  Earthiness seemed kind of flaky, imprecise and, frankly, unintellectual.

After many years of disciplined practice, I finally started to have some relationship with Flowing and to the ground.  It is interesting to note that since the presidential election the place I have most wanted to be is in Flowing—the rhythm of the earth, of weight, of the feet, of the ground—and it has given me enormous comfort.

In Flowing during the second wave, I joined with a friend, and we curved around each other, rising and falling.  I tried to circle behind her, but she kept me solidly in view, circling also.  Before long, Tammy suggested on the microphone that we move through the room.  Usually, this instruction is interpreted as an invitation to part ways with a partner, but this time, we moved through the entire room together, still partnered, squirreling down through tunnels of legs, wrapping around the columns, finding space above.  We moved like currents in the same stream, parting around intervening objects, still connected, coming back together again and again.  The dance was very porous, and many entered our partnership or influenced it, even as we traveled, depositing bits of rocks and leaves.

“We often forget that the planet we are living on has given us all the elements that make up our bodies.  The water in our flesh, our bones and all the microscopic cells inside our bodies all come from the Earth and are part of the Earth.  The Earth is not just the environment we live in.  We are the Earth and we are always carrying her within us.” –Thich Nhat Hanh

In Flowing Staccato and Flowing Chaos I joined with another friend, finding depth and power, noting the low bass waves that travel by the feet.  We moved both in sync and totally independently, unpredictable, wild, whole-hearted.  I walked back into my spine and she responded with bounding cross-steps, nodding her head to the beat and moving in diagonal lines.

The second and final wave of the class was a flowing wave, which is to say that as we moved through all of the 5Rhythms, each rhythm also had the flavor of Flowing contained in it. Following the sequence of Flowing, Flowing Staccato, Flowing Chaos, Flowing Lyrical, and Flowing Stillness, Tammy repeatedly invited us to partner.  At one point, I turned to a man who totally ignored me.  I wandered to a different partner, slightly confused, but not too concerned.  Later, I noticed that he wasn’t making eye contact with anyone, and was glad I hadn’t taken his lack of attention personally.

In Lyrical I joined with two others, and we threaded in and out of one another.  As the music transitioned into Stillness, our breath became very strong.  Tammy said something like, “Breathing in and receiving, breathing out and offering.”  I began to move through the room, doing what I call Passing-through practice—when I let myself stream through others and let others stream through me, sometimes until there is no energetic separation at all.

“We are a living, breathing manifestation of this beautiful and generous planet.  Knowing this, we can begin to transform our relationship to the Earth.  We can begin to walk differently and to care for her differently.  We will fall completely in love with the Earth.  When we are in love with someone or something, there is no separation between ourselves and the person or thing we love.”  –Thich Nhat Hanh

I danced hard, but didn’t feel tired, sore, or even very sweaty at the end of class.  I went home feeling content—an emotion that surprises me lately—and, too, feeling grateful, for the guidance of Flowing and for the support of the Earth.