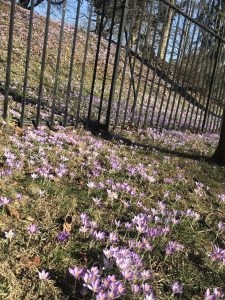 I had to pull over to take pictures. The entire hillside outside the rear fence of the Brooklyn Botanical Garden was covered with tiny purple crocuses, almost blurring completely together.

Spring is actually happening. It’s like how I feel about singing. For so long, I couldn’t sing at all. It was clipped, awkward, soundless. But now this miracle happens. I open my mouth and sound comes out and it’s a song. It might not be perfect, but it’s alive. In much the same way, spring trots out, inevitable and miraculous at once.

I feel like the entire past year has been winter. 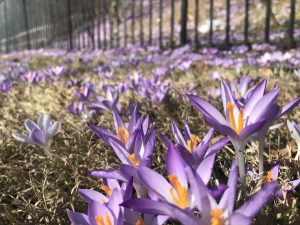 The pandemic isn’t over, and in fact the more virulent new strains of coronavirus are extremely concerning, and may even be impacting people who have already been vaccinated. People who are close to me have recently tested positive, and I’m praying hard for their swift and complete recovery.

And yet, the earth is coming back to life, irrepressible ebullience in every corner and urban hillside.

Yesterday I went running and paused not far from home. Drums. I danced on the sidewalk, then decided to follow the sound. It was a latin collective, with a drummer and standup bass, throwing down on the sidewalk. Scores of people were smiling, eating, and dancing. I sidled close to the band and danced too, stepping back hard and sinking into the hips. Their set ended and I continued on my run, feeling grateful to be alive, grateful for spring, and grateful for my home, Brooklyn, New York, where you can go for a run and find drumming and dancing, and be right at home, dancing amongst total strangers. 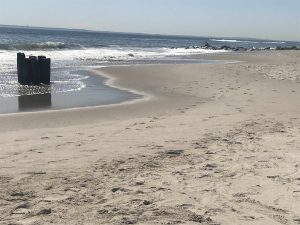 For months, I’ve bundled up in parka coat, snow pants, ski gloves, balaclava, boots, and thermal underwear to dance with the sea at Jacob Riis Park. Today, I needed only a few layers.

Given the lovely March day, the beach was crowded.

Instead of crossing the wide beach directly to water, I made my way down the wide paved boardwalk, hoping to find a little more solitude. Instead, there were people as far as I could see, so being alone, like I was during the the frigid temperatures of deep winter when the parking lot was in deep snow and snow even covered the beach, was simply not available.

The tide was maximum high, leaving me a relatively small dance floor of packed sand. I put my bag and coat down where it was safe from the waves, took off my shoes, and moved into Flowing. I started by rocking side to side, syncing breath and movement, letting the divine smell of the ocean in, letting more and more breath in, and finding weight and momentum. Before long, my rocking found a curve and I began to move in circles. At times, the soles of my feet were cold. I let the swaying pull of the ocean lead me, and found myself pushed and pulled, casting downhill, dropping and turning, attentive to the sea’s magnetic forces.

This went on for so long, this attentiveness to pushing and pulling, to curving and dropping, to forces shifting direction. I used to think I would maybe stay in Flowing all day and never move into Staccato, but now I know the wave just unfolds in its own time.

As anyone who dances the 5Rhythms well knows, once Flowing is well founded, Staccato is likely to naturally arise. And soon, I was breathless, dropping and cutting, finding direction and expression. The packed sand I could move easily on was relatively narrow, so I was closer to the waves than usual, sometimes dancing at the very edge, moving along it diagonally, dancing back into my hips, then dropping, changing direction and moving forward.

I noticed a new detail – the saturation line. There was the edge of the ended wave being pulled back into the sea, and right behind it this saturation line, where the sun still reflects on the wet sand before the water is fully absorbed. When I stepped below the saturation line, it felt cold. Above it was totally bearable. In Staccato, I paid careful attention to this jagged saturation line, sometimes below it and sometime above it, noticing the vast difference in temperature on the soles of my bare feet.

When Staccato emerged the energy of movement grew more lively. A staccato song I love replayed in my mind, and before long I was leaping and pausing, leading with my knees and elbows, and finding new ways to express spring’s enlivened vigor, still very engaged with the sea’s edges, sometimes casting down and backward, uphill, stepping across, then moving up and into open gestures with legs extended and hands outstretched.

When Chaos finally started to emerge, it felt like relief. I had long given up on the baseball hat and now released my head further, tossing it at the end of a big gesture starting in the hips and curving, folding front and back and side to side, coiling and twisting through the spine and throughout my entire body. 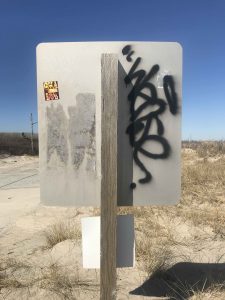 I didn’t growl or scream-cry as much as I did in the dead of winter when I was often a lone dancer on a frozen beach, but the mild weather and bare feet made up for the lack of privacy.

In Lyrical, the section of packed sand that made up my dance floor opened into endless space, the sky, the horizon, the seabirds soaring over with great racing shadows, and the wide open beach. I moved with all of it, slowly transitioning into the whispering feeling of Stillness, where all sound meets and drops out together as no sound, one great booming tone from deep in the belly of the sea. 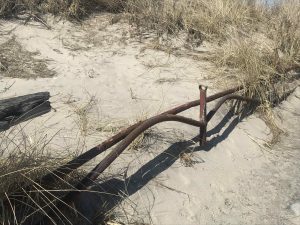 It feels like it’s been winter for over a year – a time of turning in, introspection, reflection, adversity, and challenge. And although COVID is still wreaking havoc, the emergence of spring this year brings me some sense of optimism and motivation.