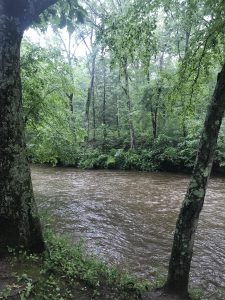 “What just happened?” my entire nervous system seems to be asking. My son, Simon, just completed elementary school, I just finished up the school teaching year, and we just moved homes.

Moving day was in the high 90’s and extremely humid, and by early afternoon I had heat exhaustion. My eyes were strained to the point that it hurt to look sideways. I pushed on regardless, telling myself that somehow it simply had to happen. By evening I felt like I was spinning off the surface of the earth.

I managed to get a small air conditioner from the old apartment to the new one and up the stairs to the third floor, then shut the door to one of the bedrooms and cranked it up. I stripped down and stretched out on a bare mattress, hoping a rest would re-set my system. My skin felt hot to the touch; and I was trembling and throwing up. Logically, it seemed likely to be a combination of de-hydration, heat exhaustion, and anxiety, but I felt like I was dying. I wondered if I might have a brain tumor, a stroke, or some other terminal malady; and went on long thought trains trying to decide if I should go to the emergency room.

I woke up the next day feeling better but still shaky. I walked into Home Depot in Bed Sty and realized that it was hard to see anything at a distance. This is most likely because my eyes are going downhill, but I got scared again. I could feel adrenaline spiking and flooding my body’s systems. I managed to calm down and get what I needed, but I still felt vulnerable. I spent the day building closets out in the new apartment and drinking liter after liter of water. Despite my precautions, I started to feel extremely weird again by late afternoon.

My sister, a marathoner and iron man athlete, has been heat exhausted countless times, and has also suffered from at-times crippling anxiety. “I’m really sure you’re ok. This is what anxiety does. You think you’re dying. Even if you logically know you aren’t. It’s fight or flight.” I found this reassurance immensely helpful. I also spent some time slowly breathing out for longer than I was breathing in, which helped to calm my overstimulated nervous system.

Simon was with my parents so he could be shielded from the chaos of the move and I could be freed up to work efficiently. We moved into the apartment we are just leaving as he was taking his first steps; and now, ten years later, we are leaving as he gets ready for middle school. My priority was to arrange his room so it would be inviting for him when he first walked in and this kept me going even as stress hormones continued to flood me.

On the fourth day, I decided to do one more trip to the old apartment to rescue a box of drawings I had decided against; and I found that I had also forgotten my checkbooks and the hardware for Simon’s bed frame.

I had the odd feeling that we were a receding tide in this place. In the front of the building, I said good bye to my favorite tree. As tears heaved up, I circled its trunk with my arms, thanking it for watching over us all these years (and very much hoping no one was noticing this display of emotion).

I did not practice the 5Rhythms for these four active days, or the two days previous – an unusually long break in practice.

On the afternoon of the fourth day I left to travel to my parents’ house in northern Connecticut and re-unite with Simon.

Last year during the first stretch of the pandemic, Simon and I stayed with my parents for 6 months. During that time, I made it to the woods and to the Scantic River most days, and often danced in nature, in solitude, and in relative silence. In winter, the river flowed along with only the bare trees as witnesses. In early spring, the water level was high and the water flowed rapidly. By late summer, the banks had widened and the river had shrunk down to a small stream.

Last summer was the first of many years that Simon and I didn’t travel; and it turned out that this opened an unexpected door.

To my immense surprise given many years of poor credit, I was able to buy a place in Brooklyn – something that had never seemed like even a remote possibility. This was because of a brief buyer’s market when many flocked away from New York City, the fact that I didn’t spend thousands of dollars on summer travel, and the support of many friends and family members. 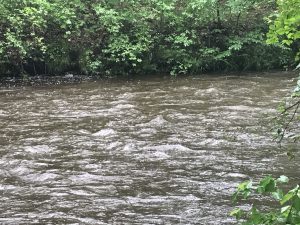 Today, following a torrential rainfall, the river was swollen, fast, and muddy. I ran on a loop trail, then decided to do a 5Rhythms wave – that is, I decided to dance through each stage of the 5Rhythms practice: Flowing, Staccato, Chaos, Lyrical, and Stillness. The ongoing light rain intensified, but I found a spot on the trail that was sheltered by tree cover.

I thought I would just dance a two minute wave, but it opened up once I started moving. There was a slight incline, and I used the feeling of gravity pulling my body downhill to find my way in. I noted the sensations of the moving feet, and took deep breath after deep breath. The rush of thoughts settled much more readily than I had anticipated that it would.

My experiences from the previous year when I had danced by this same river almost every day came back to support me.

Today Staccato arrived with ease and precision. I had no problem moving with decisive, clear gestures. The sound of the rain on the tree canopy increased; but I was still shielded and the ground stayed soft rather than muddy.

Chaos disorganized me. “Faster than you can think,” ran through my head, something Gabrielle Roth, the creator of the 5Rhythms, would say. It occurred to me that moving faster than the brain can process proprioception might indeed allow us the opportunity to short circuit our habitual patterns – the things we do again and again to escape discomfort, avoid pain, and reassure ourselves that we exist, that we are separate, and that we will never die.

I thought about how territorial I had been during the weeks leading up the move – no doubt an attempt by my mind to reassert what it knows and relies on.

The rain got lighter again as Lyrical arrived, and I rose, extending as I stretched my arms upward, casting and arcing around my small dance circle.

Stillness always calls me strongly in this place, and I moved with quiet absorption.

I left the woods and ran back home in steady rain, barely noticing the steep uphill climb, just taking it one single footfall at a time.