On a morning just before the spring equinox, I woke up way too early. The familiar squirm of anxiety made it feel like I wasn’t even waking up, just opening my eyes.

I decided to go for a run and headed to a sprawling cemetery where I had run one other time. The last visit, I had been pressed for time, and only just dipped in. This time, I set the intention to see what the place had to offer.

Instead of running straight, this time I turned right, past mausoleums with the names “Abel” and “Heath.” The path continued to wind uphill. Soon I took another turn, and another. Before long I was lost, feeling receptive and curious. I noticed angels in all manner of repair, some soaring above sections of graves with the far-off NYC skyline in the distance, some sunken to the level of the knees in the soft earth, some even missing their heads. I moved off the path to investigate and took pictures whenever something captured my attention.

Around one bend I discovered a section dedicated to the “Love” family. If I had been looking for a sign this would have been a perfect fit. I lingered, feeling more and more a sense of grace. 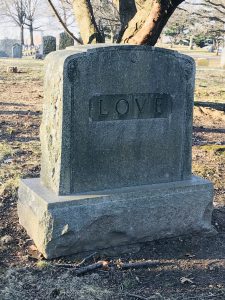 Eventually I continued my run along the winding paths of the cemetery. Pausing to check out another grave, I heard a loud thud as my phone skidded on the pavement. I discovered that the slip-on pocket I had on my ankle had torn. I checked and found only one of my two keys remaining.

I decided to try to retrace my steps to try to find the key I was missing. I took a left, a left, a right. And another left. Things looked familiar but I wasn’t sure. I second-guessed myself. The only landmark I remembered for sure was the Love grave. It crossed my mind to wonder, “What if my key was right in front of the Love grave?” “Nah,” my mind said to my own self. “That would be ridiculous. What are the chances? No way.”

I guessed I was off track, so backtracked again to the last fork and went left. There it was once again, the Love grave, unmistakeable, carved in stone.

And, yes, you guessed it. There I found my key. Silver metal glinting in the sun, directly in front of the Love grave. Love is the key to everything, after all. 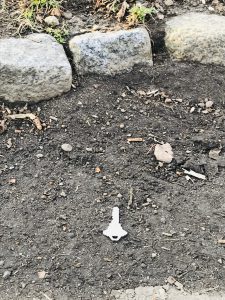 There was an employee close by on a riding lawnmower. Even so, I crumpled and started to cry, deciding that any thoughts that flowed through were a gift from the spirits, and listening intently in case there was more that needed to be heard. After considerable time of lingering, praying, listening, and giving thanks, I headed back through the winding paths to the exit.

A couple of days later, I found myself dancing a prayer for the Spring Equinox at Jacob Riis Beach. It was much colder than I thought it would be and I had been overzealous, dressing in just a spring sweater. I was tempted to bail, but decided I would step in, if briefly, do a 5Rhythms wave – which is to say that I would dance through each of the five rhythms: Flowing Staccato, Chaos, Lyrical, and Stillness – and see what might happen.

I started to move right away to ward the cold from my body, but shifted and decided to make a good beginning, drawing a big circle on the sand to dance inside of and walking around it three times clockwise. The cold wasn’t as strident as I feared, and I settled into Flowing. At first I was not totally engaged, thinking I might go through the motions and get back to the warm car as quickly as possible. I found my way in by adding a prompt for myself, playing with internal and external rotation in different body parts, beginning with the feet, then the knees, hips, spine, shoulders, head, and arms. I ended with the elbows, anticipating that they might pull me naturally into the rhythm of Staccato.

I really got into Staccato this time. I thought about the aspect of Spring that is this wild rush of energy, this incredible push of plants that have been moving and creeping underground in quiet darkness, and finally gathering up the force to break through the surface to sunlight.

Some passersby stopped to spectate and I both tried to pretend I didn’t see them, and sharpened my moves – seeing myself briefly through their eyes.

I slowed briefly, for a moment ashamed of this unabashed joy, even in the face of so much suffering in the world, even as the earth’s temperatures heat up and wild storms are unleashed, even as my own uncle hovers on the verge of dying, even with so much that is fucked up and painful and brutally unfair.

I dug even deeper into Staccato, sinking down and pulling my low belly in, then pushing breath out sharply.

Chaos was a relief as it overtook me. I was a little tired at the outset following an active day, but found that I had a lot more energy than I needed at this point. I thought of the way I was downright ebullient at work on Friday despite significant obstacles and discouraging setbacks over the last several months following a few minutes outside in the warm sunshine. Every year, I’m reminded that Spring really does help. That joy might just erupt if I can get over the guilt I feel about it, and if I can get over the guilt about not feeling it even when I think I should.

Lyrical came and went. Soon a soaring bird and a glowing sky opened the doorway into Stillness; and I made my offerings and petitions in honor of the season, then sat quietly, seeing and hearing the crashing waves and barely feeling the cold.