After bowing to the space, to all of my teachers, and to practice itself, I took a slow lap around the perimeter, absorbing information with all of my senses, excited to join such a large gathering of dancers. I paused to put my fingertips on the speaker, to directly feel the vibrations of the music. I also traced my forearm along the soft black fabric lining the window-opposite-wall and moved my feet slowly, noticing slight shifts in the temperature of the floor.

Aside from one brief online session, this was my first experience with The 360 Emergence, an embodiment modality created by Amber Ryan and Kate Shela.

I had been groggy before the session, but brightened with curiosity as soon as I started moving inside the space.

In Saturday’s session, after my lap around the room, I wandered to the middle, spiraled for a short time, then lowered myself to the ground to stretch, undulate, and prepare. Before long, I soared throughout the space, delighting in the seemingly infinite exchanges given such a large number of dancers. I was happy to find elation, and cascaded through multiple patterns and gestures and vignettes, sometimes catching someone’s eye and sharing a gesture or an embodied conversation, then moving back into the collective field or dancing with my own internal impulses.

Amber kept inviting people who were embodying “spider energy” to weave through the space, and I felt supported in continuing to move and thread throughout. At the same time, I was careful to monitor when there was a flavor of grasping and reminded myself to slow down if I found myself roaming and searching, rather than simply present to whatever I found or found me.

The second half of the session on Saturday was a marked contrast to the soaring, effusive first half.

A conjunction of factors flattened me out.

The rest of the dancers seemed to be having the opposite experience. It seemed like they were slow to light up, but now they were exploding with life, veritable fountains of creativity.

I was grounded. Dull. Disconnected. Disengaged.

Whereas in the first half, I moved with grace and power, glancing by, slipping through moving gaps between bodies, finding expression and connection with partners and with the whole room, now my feet were flat. Before I was a moving matrix, easily making my way to the ground, the sky, and back around. Now my knees hurt, I was afraid of damaging them, and I couldn’t remember what it was like to range with ease through many different levels.

During the second half, one good friend bore me up in a joyful, bluegrass-sounding jig, but other than that, I stayed flat, though continued to move at least some part of me. 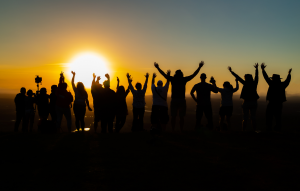 Whereas in the first half I moved easily even through very crowded parts of the room, now I was afraid of getting hit or crashing into someone, energetically opaque, and knew that if I stayed in the middle where the energy was most intense I risked getting hurt or hurting someone.

At the end, I packed my things and darted out, feeling isolated. Then I remembered that there were many close friends inside, who I had missed during the long pandemic years. I talked myself into going back in to visit with them. I remained flat, however, and now also added on socially awkward and anxious.

I finally headed home, deciding not to take too much stock in this unpleasant and uncomfortable mood. My twelve-year-old son, Simon, was away for the weekend, and I was alone in the apartment. I ate a simple dinner, made a clutter-mess, and decided to get to bed, wondering if a good night would improve my aching knees and my feeling of isolation.

I slept deeply, for more than eight hours. Sunlight was peeking through my sleep mask when I finally woke up, and I was happy to see that I had slept until 8 AM, three hours later than my weekday rising time.

The morning flowed easily; and I arrived at Mark Morris Dance, the home of the workshop, in good time.

Without negotiation or incident, the awkwardness dissolved, and I greeted friends and acquaintances in the foyer of the giant James and Martha Duffy studio happily, excited to have the whole session in front of me, and wondering what would happen.

Kate and Amber appeared to be well-aligned, and moved back and forth seamlessly, using the pronoun “we” often. In their teaching, they emphasized presence, consent, permission, and energetic alignment.

They also invited participants to attend not only to the visible, but also to the invisible, and even mentioned ancestors. The room seemed alive with spirit. I found one ancestor lingering at the margin of the room and took them by the hand, escorting them into the middle of the dance.

There was a pause for some teaching in the middle of the session, and Amber and Kate invited people to verbally share what was coming through for them. Many expressed relief, gratitude, and delight to have the opportunity to move inside such a uniquely inclusive and affirming container.

I shared something myself, and noticed a burst of chemical activation immediately after. It settled quickly as I passed the mic (humorously renamed the “michelle” by Kate!) to another participant.

For nearly the entire four hours, I stayed bright and engaged.

At one point, I was dancing enthusiastically near Kate and Amber’s table when Kate said something like, We really have to take our medicine in measure, and we have to take care of our bodies. We can’t go throwing our bodies around like we’re 14-year-olds when we’re actually 50!

I had to smile. I teach 14-year-olds in a public high school, will be 50 in less than six months, and frequently jump in to dance with them, even doing dramatic drops on the spot with no warmup whatsoever.

Just the day before I had gimped down a steep flight of stairs, feeling tender in the fronts of both kneecaps. At the time, I had given myself a stern talking-to about taking it down a notch and acknowledging my age and limitations before I cause irreversible damage.

Kate’s offhanded comment hit home in a way that somehow managed to delight me, even though she was, perhaps unknowingly, calling me to acknowledge my vulnerability and give up the hope of being a hero and/or the impossible (though compelling!) dream of impressing the 14-year-olds I teach.

I continued to weave, delighting in infinite exchanges throughout the journey, once in a lifetime intersections. Some I will forget, some will live in my memory forever.

At the middle of this glorious day, when we paused and sat together to speak, taking turns with the “michelle,” Amber brought up Gabrielle Roth, the creator of the 5Rhythms dance and movement meditation tradition. Both Amber and Kate were trained in the 5Rhythms, and were 5Rhythms teachers for many years. Amber acknowledged Gabrielle as the root teacher, and told the story of her path to the 360 Emergence with a fully engaged heart.

Then, she paid homage to the 5Rhythms tradition, and invited all of the 5Rhythms teachers in the room to stand up. That includes me now, and I was self-conscious as I stood, along with five or six others, and my heart swelled up with gratitude, joy, and a crashing tide of other strong emotions, bearing along years of experiences, thoughts, and emotions.

Finally, Amber invited a handful of interns, the first generation-in-training of 360 Emergence teachers; and I cheered along with the others, happy for this new vision, happy to be alive, and happy for this blessed new emergence.

This blog is not sanctioned or produced by the 5Rhythms organization. Meghan LeBorious is a 5Rhythms teacher, meditator, artist, mother, and writer. She has been on the 5Rhythms dancing path since 2008.